Facebook Twitter Copy URL
Copied
The late AKO Bicol Representative Rodel Batocabe was one of the more vocal partylist lawmakers. He was running for mayor of Daraga.

MANILA, Philippines – The killing of AKO Bicol Representative Rodel Batocabe – the first involving a sitting congressman under the Duterte administration and occurring 3 days before Christmas – came as a shock to his colleagues and to the small town where he was running for mayor.

He succumbed to 8 gunshot wounds.

The 52-year-old Batocabe was attending a gift-giving event for senior citizens and people with disabilities in the remote village of Burgos, Daraga town, Albay on Saturday, December 22, when two men wearing bonnets shot and killed him inside a covered court, police said.

Batocabe and Diaz were rushed to a hospital in Legazpi City, but they were pronounced dead on arrival. Seven senior citizens were also wounded.

A lawyer and 3rd-termer representative, Batocabe was running for Daraga mayor in the 2019 elections.

He was challenging the reelection bid of Mayor Carlwyn Baldo as well as Vice Mayor Victor Perete, who is also running for local chief executive. (READ: Political foes behind Batocabe killing, say family and lawmakers)

Batocabe was one of the more vocal partylist representatives in the 17th Congress, where he served as the party-list coalition president. He was vice chairperson of 3 major House committees, including the panels on dangerous drugs, good government and public accountability, and natural resources. (READ: Arroyo, lawmakers condemn killing of Batocabe)

Batocabe was part of the supermajority bloc under former speaker Pantaleon Alvarez, but shifted his allegiance to Minority Leader Danilo Suarez’s bloc after the House coup that made Pampanga 2nd District Representative Gloria Macapagal Arroyo the new leader of the House.

Batocabe had strongly supported Alvarez when the latter was still in power, having been one of the first 37 party-list lawmakers to pledge their allegiance to Alvarez and the ruling Partido Demokratiko Demokratiko Pilipino-Lakas ng Bayan after the May 2016 elections.

A lawyer and full-fledged Iskolar ng Bayan, Batocabe graduated with honors with a degree in economics at the University of the Philippines (UP)-Diliman. He finished law at the UP College of Law, before taking up his masteral degree in public administration in the same university. 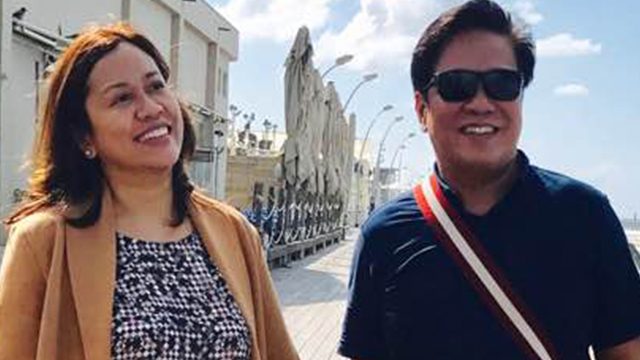 Such was the tragedy of Batocabe’s death that he was killed on their wedding anniversary.

In a Facebook post hours after her husband’s murder, Gertie Batocabe shared photos of her and her husband on vacation, with this caption: “Today is our wedding anniversary. I will always have these in my heart, despite how busy you were, for my 50th birthday you took me to a place off-grid just to strike it off my bucket list. I will never understand your world. Come back in my dreams Bá. Thank you my love…”

Batocabe had frequently posted photos of him and Gertie on Facebook, calling her his “wifey.” Photos showed them having lunch or enjoying vacations, among others.

Prior to his death, Batocabe and other party-list lawmakers had to deal with the aftermath of the House leadership’s removal of lawyer Eugene de Vera as representative of the Arts, Business, and Science Professionals party. Batocabe led meetings of the party-list coalition on the matter, but he told Rappler in early December that they have failed to come up with a unified stand. While most lawmakers are allied with the majority bloc, some are also part of the opposition groups in the House.

Still, Batocabe echoed De Vera’s contention on the latter’s removal as lawmaker – that only the House of Representatives Electoral Tribunal, not the plenary, has jurisdiction to remove a sitting member of the chamber.

“Such jurisdiction is exclusive and includes the determination of the qualifications of the nominee to seat in Congress. Thus, it is my position that a party-list nominee who took his oath and assumed office in the HOR is protected by the Constitution and by the institution itself. As such, he cannot just be summarily removed by a mere letter claiming that he is no longer a member of his party-list,” said the late congressman.

Batocabe had been in the headlines in his last months in the House, mostly for his stance on transportation issues.

He wanted the government to incentivize local manufacturers to build new jeepneys under the public utility vehicle modernization program.

In July 2017, Batocabe had also demanded accountability from transport network companies and the Land Transportation Franchising and Regulatory Board in cases of accidents on the road. At the time, Batocabe was grieving the death of his nephew, who died after the latter’s Uber vehicle crashed in Singapore.

The late congressman drew flak last year for filing bill that would impose a 30% tax on cosmetic products. But he said he will stop pushing for the passage of the measure so he won’t get in the way of Filipinos’ “happiness.”

Batocabe, however, took pride in being an advocate for education, especially in his home region, Bicol.

“The easiest, cheapest and honorable way to fight poverty and move up the socio-economic ladder is through education. Hence, making quality education  accessible to all, especially the masses, should not only be an advocacy of AKO BICOL but must be its continuous and  firm commitment so long as there are still people hoping and dreaming to escape from the clutches of poverty,” said Batocabe. – with reports from Camille Elemia/Rappler.com