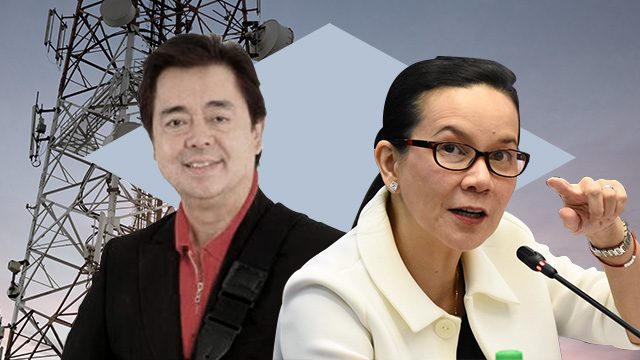 (I will really oppose that and not just that, should they not listen to us, because you know they face the Senate and say good words but they won’t pursue them, we will file a case. This kind of policy should be stopped because I think it is harmful to our countrymen.)

Poe again expressed opposition to Jacinto’s policy, saying it is counterproductive to the government’s goal of improving telecommunications infrastructure in the country.

She said the proposal would slow down the improvement, as the country still lacks 45,000 cell towers.

(Right now, there are only two companies doing that, Globe and Smart. And now, Mr RJ Jacinto, presidential adviser on economic affairs, wants to only allow two companies.)

(Isn’t it that the President wants competition in cellular services to lower prices and to increase efficency? What the presidential adviser on economic affairs is doing is the opposite.)

As early as October 2018, Poe had slammed the move, saying that firms which want to build cell towers should be allowed as long as they are subject to regulations.

Jacinto, through a draft memorandum circular, is pushing for a policy that will allow only two independent tower companies to build and share their towers for use of Globe and PLDT, as well as the incoming 3rd telco player in the industry.

The Philippine Competition Commission, the Office of the Solicitor General, and industry stakeholders oppose the anti-competitive nature of the policy.

Information and Communications Technology Acting Secretary Eliseo Rio Jr also said the proposal would surely be challenged by the telcos in court. – Rappler.com