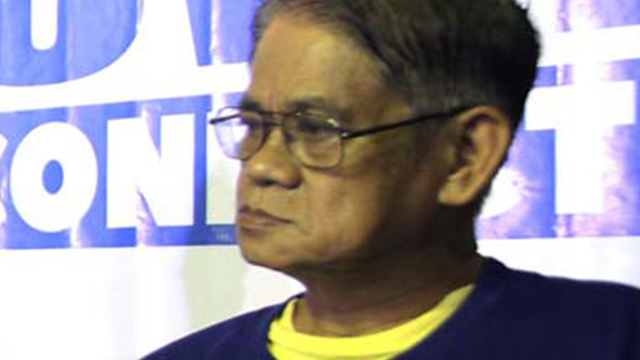 According to Baylosis’ lawyers at the Public Interest Law Center (PILC), the consultant is out on bail on his only other charge pending at the Manila RTC, which means he should get out of jail soon.

Baylosis will file counter-charges against cops and soldiers involved in his illegal arrest.

“For false implication and faulty prosecution, Baylosis will press counter-charges against the errant policemen and military men – from the Criminal Investigation and Detection Group-Manila and the Intelligence Service of the Armed Forces of the Philippines – and all other participants in the fabrication of criminal charges,” the PILC said in a statement.

Rearrest of the Reds

Baylosis was arrested on January 31, 2018 – the first communist leader to be rearrested when President Rodrigo Duterte canceled the peace talks at the time.

Former police chief and now senatorial aspirant Ronald dela Rosa claimed then that Baylosis’ arrest was not related to the termination of peace talks, but simply due to the consultant having been caught illegally carrying a gun and a hand grenade.

The police operation against Baylosis supposedly stemmed from a tip that certain armed men were roaming the area on that day.

During the trial, the different policemen who were involved in the operation gave different testimonies as to who did what and who saw which. Of the 7 cops involved, only Police Officer 3 Jeffrey Padilla claimed to have seen a gun tucked in the pants of Baylosis.

Padilla also claimed during the trial that he found a hand grenade inside a bag that Baylosis was carrying.

Judge Aguba said that “what PO3 Padilla saw was more imagined than real.”

“It was made only solely to justify their police operations against the accused,” said the judge, noting that Padilla wasn’t sure his distance to Baylosis at the time when he supposedly saw the gun.

Baylosis was boarding a jeepney at the time, and Judge Aguba said given the distance (10 meters) and the fact that it takes only seconds to board a jeepney, “it was improbable for [Padilla] to see, even with his perfect vision, what he declared he had seen under such circumstances.”

On the alleged hand grenade, Judge Aguba said the police did not present evidence as to the “want of authority of the accused to possess the subject explosives.”

No presumption of regularity

The judge said the search and arrest done on Baylosis were patently illegal because cops had no “actual belief and reasonable suspicion” to conduct them.

“The arrest of accused being illegal, the subsequent search on the persons of accused, and the purported confiscated items cannot be used as evidence against them,” said the judge.

She also took note of the repeated inconsistencies in the story of who talked to the tipster.

“The foregoing, patently, destroyed the credibility of the arresting officers; the same rendered their testimonies unreliable. As such, this Court cannot attach the presumption of regularity of performance of their functions,” said the judge.

Baylosis filed a demurrer of evidence, meaning he sought to dismiss the charges even before he was asked to present his own evidence. The police side did not file a comment on Baylosis’ contention of the charges.

The PILC said: “The dismissal of the case not only vindicates Baylosis, who has always asserted his innocence; it also exposes how the police carries out illegal actions – vilification, undue surveillance, illegal arrest, planting of evidence, and filing of trumped-up charges – against peace consultants and political activists.” – Rappler.com