So were the defense counsels.

Corona’s lawyers were just as shocked to hear that the Chief Justice was scheduled to speak to various media outlets, according to defense counsel Ramon Esguerra, who was notified of Corona’s plans to speak Tuesday night, March 6.

Corona granted several TV and radio interviews Wednesday, March 7, throughout the day, starting in the morning and ending at night. The series of interviews included his first TV appearances since the start of the impeachment trial against him.

Esguerra said that because of the short notice, they did not have time to react to Corona’s plans for interviews, but said they were not worried, as he was guided by certain points. 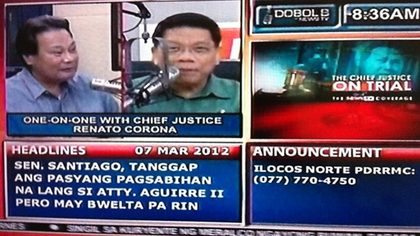 Corona has kept silent after his speech on February 17, responding to President Benigno Aquino III’s statements against him in La Consolacion College.

In Corona’s last public speech, he slammed Aquino and asked him to release his psychological records.

After that address, Esguerra said defense counsels had asked the Chief Justice to avoid making such statements and advised him to lie low.

Corona listened. Until his sudden decision to speak to the media Wednesday.

Esguerra said he was unsure why Corona decided to do so but that as long as the Chief Justice did not speak about the merits of the case, there was no problem.

The defense lawyers will also be the ones to decide whether or not they need to put Corona on the witness stand to defend himself.

The prosecution criticized Corona for turning to the media to air his side instead of using the impeachment court.

It accused the Chief Justice of resorting to “trial by publicity.” “Why would you make the rounds and have a lot of interviews, talking about various things and pinpointing a lot of people, including his fellow justices,” he said. “It goes to show that he is facing a very strong case.”

Quimbo said he hopes that Corona testifies in court and says everything he did in interviews before the Senate. – Rappler.com