Jan 18, 2019 7:26 PM PHT
Pia Ranada
Facebook Twitter Copy URL
Copied
President Rodrigo Duterte calls on the people of ARMM, Cotabato City, and Isabela City to cast their vote on January 21. 'Let us use the plebiscite as a peaceful means to finally correct the historical injustice committed against the Bangsamoro people.' 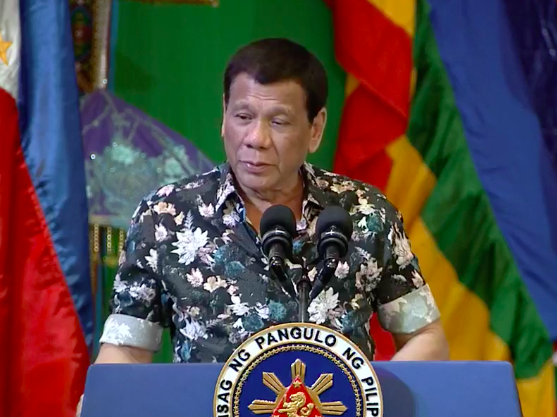 MANILA, Philippines – President Rodrigo Duterte made a last pitch for the ratification of the Bangsamoro Organic Law (BOL) from Cotabato City, the “crown jewel” of the Bangsamoro region deemed critical to the plebiscite.

He spoke on Friday, January 18 at the “Peace Assembly” for BOL ratification, 3 days before the first plebiscite on Monday, January 21. (Check Rappler’s full coverage of the plebiscite here)

True to form, Duterte slipped in a light-hearted threat to impress on his audience how much he wanted them to vote in favor of the BOL.

“‘Pag hindi, ‘di ako magpunta dito kailanman (If you don’t, I will never go back here),” he said.

While peace assemblies and rallies were held in other parts of Mindanao, Duterte’s presence at the Cotabato City event was telling.

Many are waiting to see if the city will vote to join the Bangsamoro Autonomous Region in Muslim Mindanao (BARMM), the new political entity the BOL will create if ratified.

The city’s influential mayor Cynthia Guiani-Sayadi is openly against the BARMM. Yet Cotabato City would be an important gain for the new region since it’s where all the current government offices of the Autonomous Region in Muslim Mindanao (ARMM) are. (READ: Power brokers in the Bangsamoro region)

If Cotabato City is out of the BARMM, the new government will have to look for another capital.

Duterte appealed to the Bangsamoro people to appreciate the gravity and historic importance of the Monday plebiscite.

The Mindanaoan President began his speech with a sober tone, saying, “God must be good to us. The fact that we have reached this point after so many years of negotiation and interruptions, we’re here. God is great.”

He made sure to acknowledge the long road to the BOL, and the fact that it was paved by other peace agreements with the effort of other Muslim rebel groups.

“This landmark law was not built entirely from scratch, it echoes the aspirations and principles embodied in the past peace agreements with the different Moro fronts. Indeed, it is a product of blood, sweat, and tears of many great men who came before us,” he said.

(I am calling on them to give BOL a chance. This will only come once. It may not come up again if we don’t take this opportunity.)

The law would also address grievances long-held by Muslims in the region, he said.

“Let us use the plebiscite as a peaceful means to finally correct the historical injustice committed against the Bangsamoro people or the Moro people of Mindanao,” said Duterte.

ARMM Governor Mujiv Hataman had the same message, saying a “yes” vote for the BOL would mean the end of violence.

He called on the people of ARMM, Cotabato City, and Isabela City to cast their vote on Monday. – Rappler.com