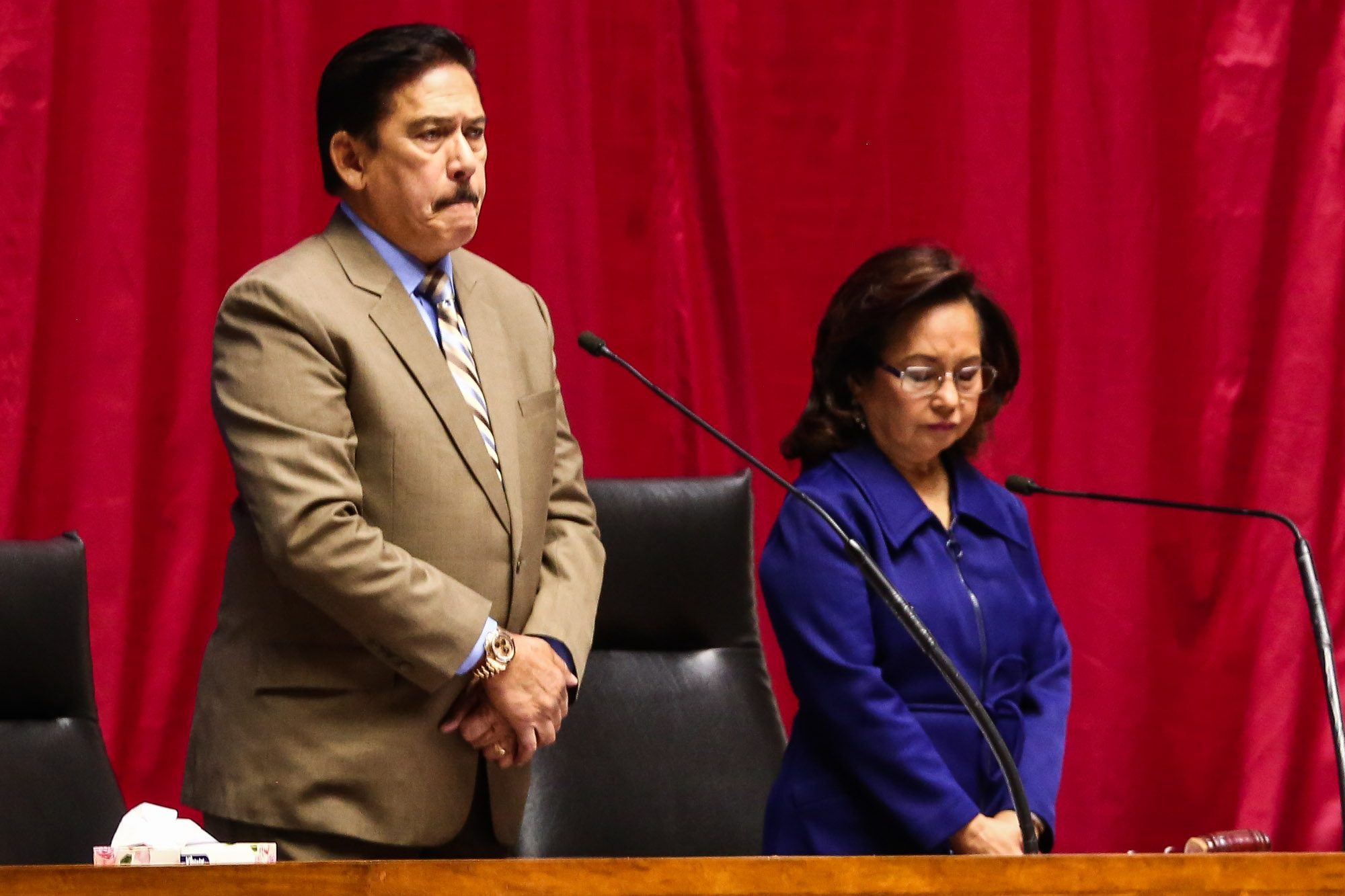 Facebook Twitter Copy URL
Copied
Senate President Vicente Sotto III says majority of senators are in favor of it. The age, however, is up for debate.

Sotto, the bill’s proponent, said he and Senator Richard Gordon, chairperson of the justice committee, already made an agreement.

(It should be a priority. In our conversation, Senator Gordon and I agreed to  prioritize the bill and then we would debate on it…. Yes, I know he would prioritize it because we discussed it.)

The justice committee is scheduled to hold an inquiry into the proposed amendments to Republic Act (RA) No. 9344 or the Juvenile Justice Act of 2006 and RA 10630 on Tuesday, January 22.

Asked if Malacanang requested for the bill’s immediate passage of the bill, Sotto said there was no formal request but President Rodrigo Duterte mentioned it during their talks and meetings.

Sotto expects the committee to pass the bill and present it to the plenary for deliberations before the break. He said majority of senators are in favor of it.

“The important thing is that we all agree that it should be lowered and they have to be held accountable,” he said.

Asked why not run after syndicates and drug lords who use children, the Senate leader said:

(Those being killed by children are not involved in drugs… It’s being seen in CCTVs, there is a rape incident in Cainta. The perpetrator is still going to school while the victim could not longer do that out of shame. There’s no involvement of drug lords or criminal organizations there. It’s a different topic. There are many crimes that do not involve drugs.)

The Senate is in session until February 8 and will adjourn for the 2019 campaign and elections. It would resume session on May 20 to June 7, before adjourning the 17th Congress. Sotto is positive the bill will be passed by then.

“What’s important is we finish the period of interpellations before the break. If they have amendments, they can prepare it during the break because we can discuss it when we resume in June,” Sotto said in a mix of English and Filipino.

Sotto, however, said there might be a little debate on the age because Gordon is pushing for 9 years old.

“My proposal is to set it at 12 years old. But we might have a little debate there I’m sure because the chairman of the committee on justice, Senator Gordon, wants it at 9 years old,” Sotto said in a mix of English and Filipino.

Sotto said setting the minimum age to 9 “might be a little too much.” But he said he is open to a compromise of 11 years old. (READ: How Duterte’s drug war targets the youth)

The development came after the House justice panel, with the support of Speaker Gloria Arroyo, approved the bill lowering the age to 9 years old. President Rodrigo Duterte has pushed for this since his 2016 presidential campaign.

Vice President Leni Robredo and minority senators, however, strongly opposed this, saying 9-year-old children should not be punished for being victims.

“Police records show that only two percent of crimes in the country involve children. But, why give focus to the minuscule data and not to the bigger cause of crimes. Have the police even dismantled any syndicate victimizing the street children?” said Senator Francis Pangilinan, author of the Juvenile Justice Law.

“I absolutely doubt that this will pass the Senate kasi it’s crazy, it’s cruel, to be honest I think it’s immoral,” Senator Paolo Benigno Aquino IV said in a separate interview.

Senate President Pro-Tempore Ralph Recto called for an “evidence-based legislation,” saying the bill should be based on facts and studies, not on “whims and unproven theories.”

In 2013, RA 9344 was amended through RA 10630, which retains the minimum age at 15 but allows children as young as 12 to be detained in youth care facilities or Bahay Pag-asa only for serious crimes such as rape, murder, and homicide, among others. (READ: When ‘Houses of Hope’ fail children in conflict with the law)

Psychologists, pro-child groups, and social workers oppose lowering the minimum age of liability, saying that a child’s brain has not yet fully developed at adolescence and that the problem is the law’s implementation. (READ: Children in conflict with the law: Cracks in Juvenile Justice Act) – Rappler.com