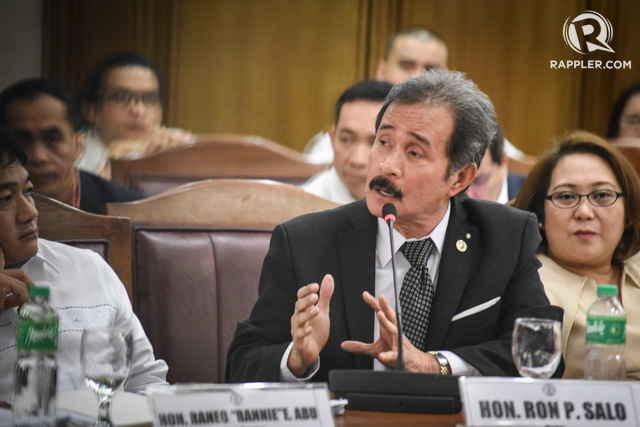 The Camarines Sur 1st District representative relinquished his post as the second most powerful member of the House on Monday, January 21, giving way to Capiz 2nd District Representative Fredenil Castro.

“Today, I will nominate a colleague who will assume that task, and other responsibilities that go with the position, but in a manner better than I had done it. In fact, he is not only my first choice but is our best choice for that job as well,” said Andaya during the session.

He then detailed his achievements as majority leader before finally nominating Castro, who had also nominated Andaya for the same post on July 30, 2018.

“In the meantime, I would like to nominate my first, original choice as majority leader, the great but gentle Fredenil ‘Fred’ Castro of the 2nd District of Capiz, as the new chairman of the committee on rules,” said Andaya.

The committee on rules is chaired by the majority leader.

“He is a hard worker and fits the role, for, above all, he rightly sees the position for what it really is: [neither] about power nor perks, for there are none, but for the diligence and the diplomacy and the work it requires, of which there are many,” said Andaya.

Castro said he will “try [his] best to fit his (Andaya’s) shoes.”

It was an expected power shake-up in the House, as Castro said he and Andaya had a “gentlemen’s understanding” regarding the sharing of terms as majority leader. (READ: Term-sharing or graceful exit for Andaya as House majority leader?)

They were the two congressmen considered for the post when Pampanga 2nd District Representative Gloria Macapagal Arroyo became the Speaker after the House coup in July 2018.

Andaya, however, said there was “no term-sharing” deal between him and Castro, but conceded the latter is “better suited” to become majority leader.

Who is Castro? Before becoming majority leader, Castro was among the deputy speakers in the House.

He is one of the principal authors of the controversial bills reinstating the death penalty in the Philippines and lowering the minimum age of criminal responsibility from 15 years old to 9 years old.

Castro is known to be one of the more animated lawmakers during his interpellations in committee hearings and plenary sessions. He often grills resource persons and delivers his speeches in Filipino.

He is the president of the National Unity Party, which sealed an alliance with Davao City Mayor Sara Duterte Carpio’s Hugpong ng Pagbabago for the May elections.

He ran and won as Capiz congressman for the first time in 2001. He has since served 4 terms as lawmaker, including his current term.

What happens to Andaya? He will now head the committee on appropriations, the powerful panel that is in charge of the annual national budget.

Jurisdiction over the ongoing investigation into the alleged anomalies in the 2018 and 2019 budgets prepared under Budget Secretary Benjamin Diokno will be transferred from the rules panel to Andaya’s committee on appropriations.

According to Castro, Andaya’s stepping down had nothing to do with the latter’s conflict with one of President Rodrigo Duterte’s Cabinet members.

Andaya said the Speaker has already accepted his resignation as majority leader so he can focus on ensuring the 17th Congress will be able to pass the delayed 2019 budget soon.

“I have been given orders: from the GHQ (general headquarters) to the front lines. I volunteered for this mission, knowing fully well that the place of honor is in the front lines,” said Andaya. – Rappler.com