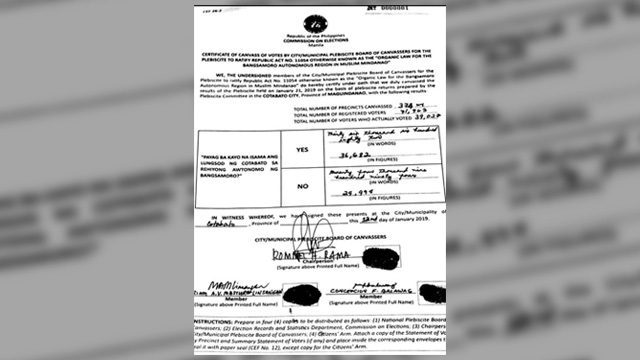 Facebook Twitter Copy URL
Copied
Discrepancies in the Bangsamoro plebiscite documents from Cotabato City will be remedied by the board of canvassers, say Comelec officials

MANILA, Philippines – The Commission on Elections (Comelec) said on Wednesday, January 23, that discrepancies found in two documents related to the plebiscite to ratify the Bangsamoro Organic Law in Cotabato City were due to “clerical errors.”

Numerical differences were found in the Certificate of Canvass (COC) duly signed by Comelec Cotabato City officer Rommel Rama. In the document, the total number of tallied votes exceeded the number of votes cast in the January 21 polls in that city.

Mismatches were also seen in the number of registered voters between the COC and the Projects of Precincts. The COC was prepared after the counting of votes, while the Project of Precincts list was publicized before the polls were held.

Based on the COC prepared by Rama, Cotabato City tallied 36,682 “yes” votes and 24,994 “no” votes. Added, the sum exceeded the 39,027 handwritten in the same document as the “total of voters who actually voted.”

In an interview over radio station DZMM Wednesday morning, Comelec Spokesperson James Jimenez said the discrepancy was due to “clerical errors” which would be corrected during the canvassing of the National Board of Canvassers in Manila.

In a separate DZMM interview Tuesday night,  Rama said they had yet to verify the conflicting figures because these “numbers were computer-generated.”

The Comelec anticipates discrepancies such as this in electoral processes, especially in manual elections where there is room for human error.

Comelec Resolution No. 10478, which states the rules for canvassing in the Bangsamoro plebiscite, provides a procedure for discrepancies. The portion on discrepancies makes up two-and-a-half pages of the 12-page resolution.

The resolution states that “in case of any discrepancy, incompleteness, erasure, or alteration…any interested party shall submit their oral observation/manifestation” to the chairman of the National Plebiscite Board of Canvassers (NPBOC), when the contentious COC is presented for canvassing.

Comelec Chairman Sheriff Abas chairs the NPBOC, which is composed of Comelec commissioners.

The interested party shall also provide a verified written petition in 10 copies. – Rappler.com