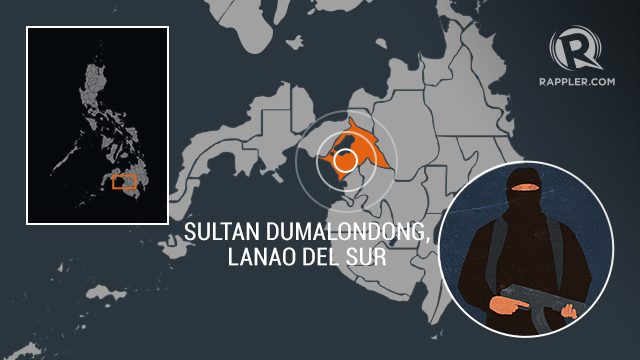 Sultan Dumalondong is about 50 kilometers from Marawi City.

Soldiers from the the 55th Infantry Battalion clashed with at least 24 armed men of the Dawlah Islamiyah-Lanao (formerly called Maute-IS), as the troops approached the terrorists’ camp at around 8 am Thursday, January 24.

Three terrorists were killed while 3 soldiers were slightly wounded during the assault, according to initial reports.

The military attack came 3 days after Lanao del Sur voted in the plebiscite for the creation of a new Bangsamoro region.

“We acted on the information [about the the terrorist’ presence] as reported by the residents and the local chief executives,” said battalion commander Lieutenant Colonel Ian Ignes.

“The enemy was completely taken by surprise [based on] the direction of their initial gunfire. We met fierce resistance as soon as we hit their final defensive lines,” Ignes added.

The group is believed to be led by Abu Dhar, the appointed leader of the DI-Lanao Group. The group has been hiding in the hinterlands of Lanao del Sur.

“Despite the enemy’s advantage over the terrain, our troops were able to gain ground and manage to penetrate their defensive lines through timely and accurate supporting fires,” said Colonel Romeo Brawner Jr, 103rd Infantry Brigade commander.

The military said its ground and air attacks prompted the terrorists to abandon their camp.

The abandoned Maute camp had running trenches and fortified bunkers. A training camp was also found a few hundred meters from the terrorists’ defensive lines.

The Maute group tried to established a caliphate in Marawi City in May 2017.

After the war, residents around Lake Lanao realized the repercussions of violent extremism, Brawner said.

“Communities now willingly give out information to government troops to rid their communities of terrorists. With the support we are receiving from the populace, we are moving forward to liberate communities from the influence of the DI-Lanao Remnants,” Brawner said.

Brawner said that the terrorists are no longer capable of mounting a major attack, only small ones.

He said the military is prepared for any retaliation after the January 24 assault. “We expect the terrorist group to attack indiscriminately, targeting Muslim and Christian communities,” Brawner added.

Brawner ealier said that the military was still receiving vital intelligence support from the US military through its drone program. “I am just a recipient of the information, including focus areas,” he said. – Rappler.com