Jan 29, 2019 2:38 PM PHT
Jodesz Gavilan
Facebook Twitter Copy URL
Copied
An SWS survey shows majority of those who disagree with jailing minors say minors should be instead placed under the custody of the social welfare department or its local counterparts 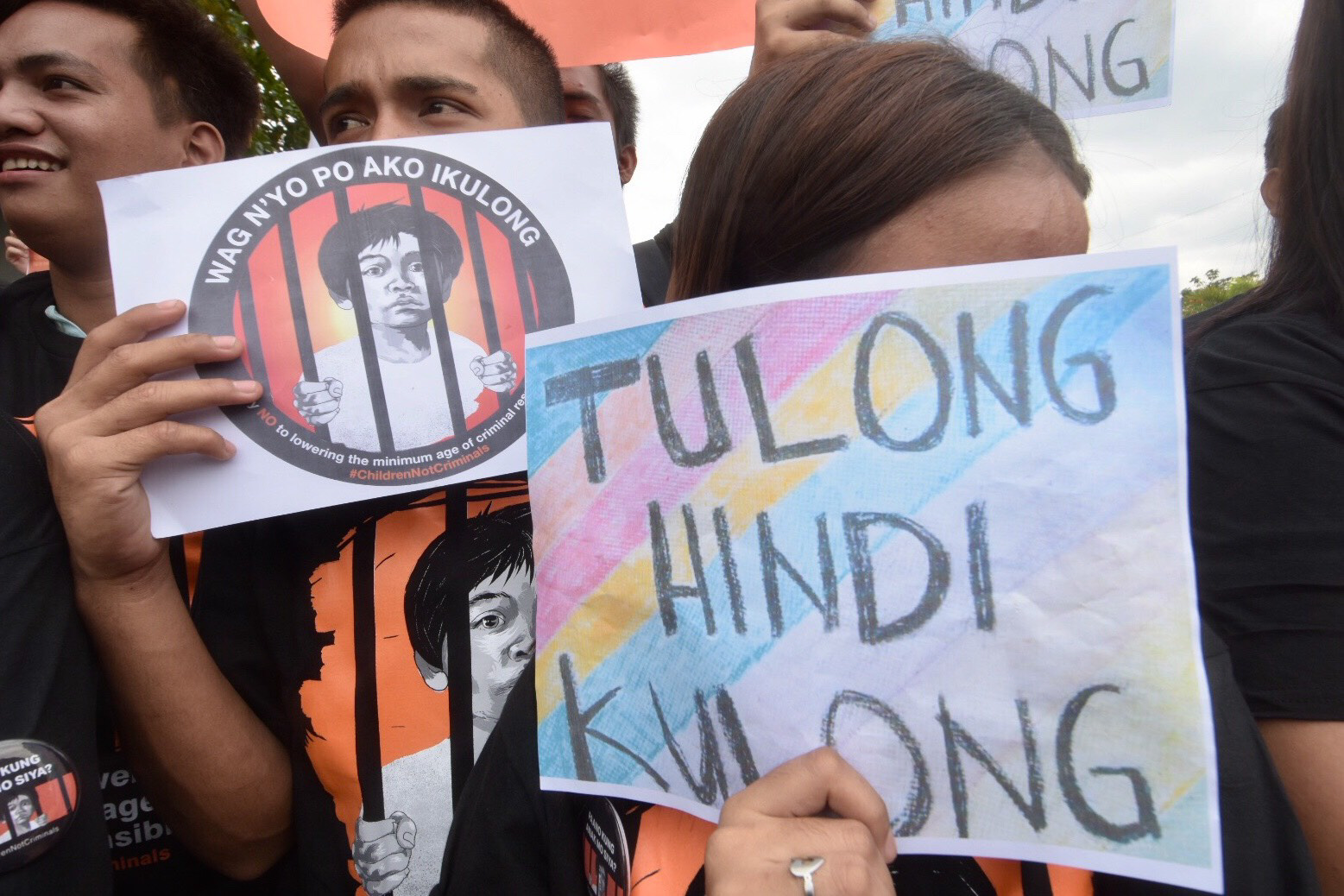 MANILA, Philippines – Majority of Filipinos who agree with jailing minors want a higher minimum age of criminal responsibility (MACR) than what legislators are aiming for, a Social Weather Stations (SWS) survey found.

Results of the SWS survey – conducted in Metro Manila in July and in the regions in December 2018 – show that 15 years old is the median MACR that people who support jailing of minors agree with. The results of the survey were released on Tuesday, January 29.

SWS president Mahar Mahangas emphasized that respondents were asked about their opinion on jailing children depending on specific crimes, including raping, killing, acting as drug courier, snatching cellphones, and stealing food.

The survey results showed public perception is divided when it comes to jailing minors involved in illegal drugs trade, with 49% agreeing that those who acted as drug couriers should be jailed, 35% disagree, and 4% undecided – or net agreement of 41.

“That already means that half of the public is already saying that they’re not doing that for a reason that they deserve jail time,” he added.

For people who agree that minors should be jailed, the median MACR they want is at 15 years old across all crime groups.

Majority of those who disagree with jailing minors, meanwhile, said that they should be instead placed under the custody of the Department of Social Welfare and Development (DSWD) or its local counterparts.

The SWS survey was conducted among 1,500 adults a distributed equally across the Philippines. It said there were sampling error margins of ±6% for each study area.

Commissioned by the Commission on Human Rights (CHR), the survey was conducted prior to the developments on the proposed bill lowering the minimum age of criminal responsibility in Congress – including the passage of House Bill 8858 at the House of Representatives on Monday, January 28.

The bill seeks to lower the MACR from 15 to 12 years old and to send children aged 12 to 18 years old who commit serious crimes to the Intensive Juvenile Intervention and Support Center inside the nearest youth care facility, also called Bahay Pag-asa. (READ: When ‘Houses of Hope’ fail children in conflict with the law)

The passage of the bill in the House of Representatives comes despite massive opposition from other lawmakers and children’s rights groups, including Unicef Philippines, which said that the measure is “not in the best interest” of children. (READ: Lower age of criminal liability? Here’s why psychologists are against it)

CHR also strongly opposed the bill, urging the government to address the conditions that push children to commit crimes, including poverty and lack of opportunities.

President Rodrigo Duterte has consistently pushed for the lowering of the minimum age of criminal liability since his campaign in the 2016 elections. The latest development reflects the House’s efforts to pass Duterte’s pet bills, with the backing of Speaker Gloria Macapagal Arroyo herself. (READ: How Duterte’s drug war targets the youth)

CHR Commissioner Gwendolyn Pimentel Gana hopes that the survey results will be considered by government officials as Senate deliberates on the proposed measure.

“The CHR is opposing any effort to lower the minimum age,” she said. “By focusing on the age, we’re oversimplifying the issue of juvenile delinquency. We have to expound on why there is a problem.” – Rappler.com