Jan 29, 2019 1:35 PM PHT
Michael Bueza
Facebook Twitter Copy URL
Copied
The country gets a score of 36, up from 34 in 2017. It ranks 99th out of 180 countries in Transparency International's Corruption Perceptions Index. 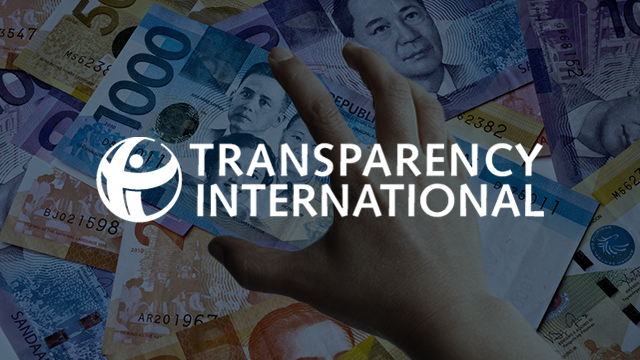 Meanwhile, efforts against corruption have “stalled” in most countries, and corruption has “undermined democracy” worldwide, said the global watchdog in its report released on Tuesday, January 29. 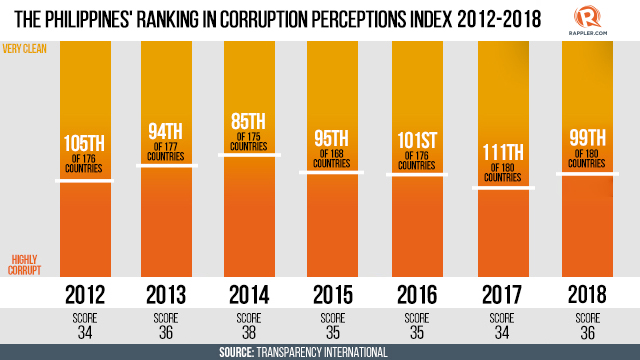 Alejandro Salas, regional director at Transparency International, told Rappler in an email that the slight improvement was “probably due to the strong stance the government has taken against corruption and mainly reflected in less tolerance towards corrupt individuals and more punishment.”

However, he noted that the Philippines’ score is “still far from the Asia Pacific regional average of 44” and was the same score the country got in 2013 under the previous administration.

“Unfortunately, the message is clear, little has changed even as political speeches and some strong hand measures make a lot of noise, the reality still seems to be that day-to-day life for the people in the country does not see much change and corruption remains a big challenge,” Salas said.

While he said that “some developments are taking place” during the administration of President Rodrigo Duterte, “particularly when we talk about a strong hand and punishment against the corrupt,” Salas argued that an effective anti-corruption strategy “needs to be comprehensive and can’t be based on only one tactic, like punishment in this case.”

The progress of anti-corruption efforts, Salas continued, “can only be achieved and sustained, if there is a combination of building and strengthening of democratic institutions, fair and non-politicized punishment, and openness to citizen and journalism participation and engagement.”

The trait that top-ranking countries in the CPI mostly share, he explained, “is the strength of their institutions that can perform their jobs. It is not about being rich or poor, being in the north or the south, it is about institutions performing their jobs freely and effectively.” (IN NUMBERS: Impact of corruption on the Philippines)

Salas reiterated the importance of making anti-corruption efforts state policy. “No one has the monopoly of fighting corruption. No single government or actor, even President Duterte with his strong hand, will get rid of corruption on his own. People need to be in the driver’s seat, as it will take many years and many governments to see substantive progress.”

In its 2018 report on the CPI, Transparency International said the “continued failure” of most countries to significantly stop corruption “is contributing to a crisis of democracy around the world.”

The watchdog group noted that more than two-thirds of countries scored below 50 in the 2018 index.

Patricia Moreira, managing director of Transparency International, said that with many democracies under threat, often by leaders with authoritarian or populist tendencies, “we need to do more to strengthen checks and balances and protect citizens’ rights.”

“Corruption chips away at democracy to produce a vicious cycle, where corruption undermines democratic institutions and, in turn, weak institutions are less able to control corruption,” Moreira added.

A cross analysis of the CPI with different global democracy indices also showed “a link between corruption and the health of democracies,” said Transparency International.

“Corruption is much more likely to flourish where democratic foundations are weak and, as we have seen in many countries, where undemocratic and populist politicians can use it to their advantage,” said Delia Ferreira Rubio, chairperson of Transparency International

On the other hand, Somalia, Syria, and South Sudan remained at the bottom of the rankings, scoring 10, 13, and 13, respectively. North Korea and Yemen were next, each with a score of 14.

In its annual CPI, Transparency International scores countries and territories by their perceived levels of corruption in the public sector, according to experts and businesspeople.

Using a scale where zero is highly corrupt and 100 is very clean, the CPI is based on surveys and assessments of corruption by bodies such as the World Bank, the African Development Bank, and the Economist Intelligence Unit. – Rappler.com