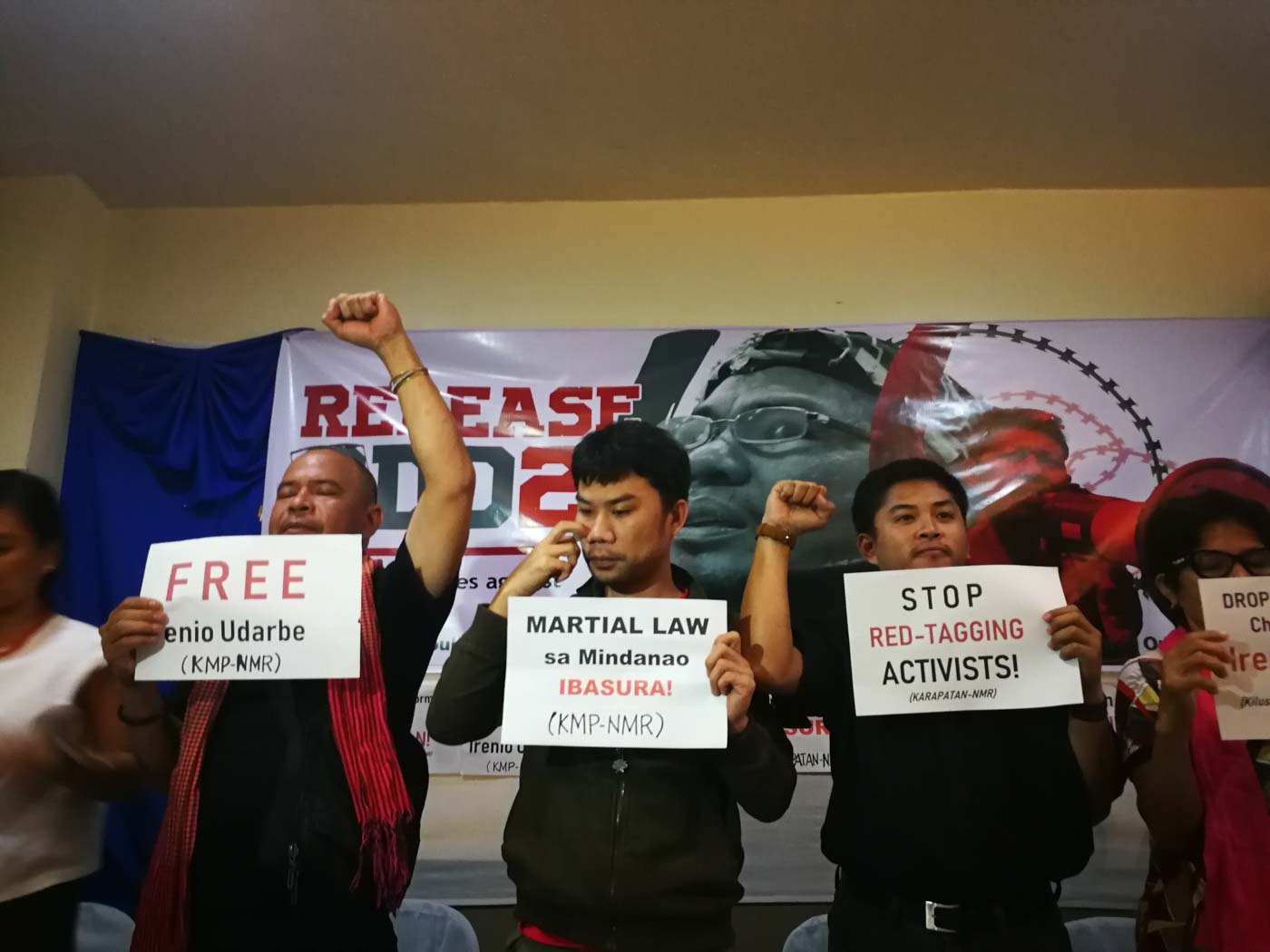 CAGAYAN DE ORO CITY – Rights Groups in this city slammed what they said was an illegal arrest of a pair of activists on Monday morning, January 28, conducted by police and military.

The two army soldiers were acting on the call for assistance by the Criminal Investigation and Detection Group (CIDG) based in Camp Edilberto Evangelista, headquarters of the 4th infantry Divsion.

Czarina Musni of Union of People’s Lawyers in Mindanao said that based on the case filed by the Philippine National Police, there was no warrant of arrest presented to the two rights activists.

Edarbe has outstanding cases of murder and frustrated murder filed against him in relation to the Binuangan Police Station attack in 2017.

He has posted bail bonds in 2018 for these cases. He has also denied that he was a New People’s Army commander.

“We do not know if the police did not know that he (Edarbe) was able to post a bail, but Goaynon is not on the same warrant of arrest,” Musni said.

According to Fr. Rolando Abejo, the two were on their way to a dialogue among a community in Talakag, Bukidnon, the 3rd Company of the 1st Special Forces Battalion and the Commission on Human Rights-Northern Mindanao.

Edarbe and Goaynon  never made it to the dialogue as they were abducted by CIDG. Abejo said that they raised an alarm after the two went missing by 12 noon, Monday.

Regional police issued a statement on the apprehension around 6 pm Tuesday, January 29, only after rights organizations raised the alarm and coming from an information on social media, that they saw the two arrested in Patag.

“We found them Tuesday afternoon, more than 24 hours since they were abducted,” Musni said.

Regional police spokesperson Superintendent Surki Sereñas in a statement sent to the media on Tuesday evening said that they were arrested based on a warrant of arrest issued by Judge Emmanuel Pasal of Regional Trial Court Branch 28.

Sereñas was referring to the same warrant of arrest for the Binuangan police station attack in 2017, where Edarbe has posted bail and Goaynon is not included.

“They are not missing. Edarbe and Goaynon were arrested at Barangay Patag by virtue of a court-issued arrest warrant according to our records,” Northern Mindanao police regional director Chief Superintendent Timoteo Pacleb said.

Both Edarbe and Goaynon claimed they were farmers, but authorities seized firearms, fragmentation grenades and subversive documents in their possession during the arrest, the police statement said.

“Edarbe and Goaynon will also undergo inquest procedings in court for illegal possession of firearms and explosives,” Sereñas said.

The two will also be charged for violating the human security act, election gun ban, and for rebellion.

But Musni said that it was impossible for the two to bring a .45 firearms and a grenade since they were on their way to a dialogue with the Special Forces battalion and CHR.

“They were riding a jeepney when they were abducted, with just a small bag and documents,” Musni said.

Professor Arnold Alamon of Mindanao State University-Iligan Institute of Technology- Mindanao Interfaith Institute for Lumad Studies said that there seemed to be a pattern in the way the government arrests are conducted.

Professor Alamon works closely with Goaynon in their research for Human Rights violations in Mindanao.

“There is a pattern to all of these, this happened in Negros Oriental, there is red tagging first then arrest. Pattern that is present in the arrest of other National Democratic Front of the Philippines consultants,” Alamon said.

“There is really a crackdown directed against legal personalities. They are human rights defenders in areas where voices are weak or not heard. That is the reason why he (Goaynon) was arrested to stop him from speaking out. Somehow he is being prevented in speaking up,” Alamon added.

Musni said that the arraignment Wednesday, January 30, of Edarbe and Goaynon showed that the police violated the rights of the two.

Musni said that the city prosecutor gave them 10 days to file their counter-affidavit against the illegal arrest pending the completion of the preliminary investigation proceedings. – Rappler.com