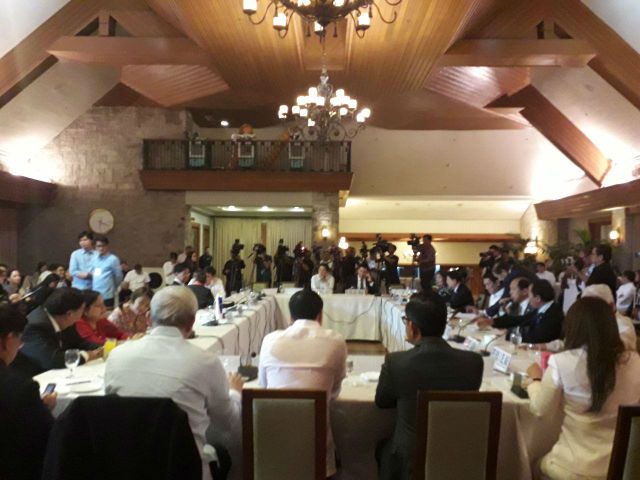 Facebook Twitter Copy URL
Copied
The bicam has so far agreed to set their total proposed realignments in the 2019 budget at P200 billion, but they are yet to identify where to source and allocate the money

MANILA, Philippines – Senate finance committee chairperson Loren Legarda assured the public there are enough funds for the May polls and the salary hike for government workers this year, based on the reenacted budget from 2018.

Legarda gave the assurance on Wednesday, January 30, during the 3rd meeting of the bicameral conference committee on the proposed P3.757-trillion budget for 2019. (READ: Bicam agrees to remove funds for dredging projects in 2019 budget)

She said that should the bicam meetings extend beyond February 6 – or the lawmakers’ target date to ratify the 2019 budget – it will not stall the May polls nor the final tranche of the Salary Standardization Law (SSL).

“We would like to assure the voting public and our government personnel that the Department of Budget and Management (DBM) will source the necessary funds for the midterm elections and salary adjustments,” said Legarda in her opening statement.

She said that she personally called DBM officials, who told her that the funding for the May midterm elections will be taken from the P10 billion that the Commission on Elections has not yet utilized as well the Contingency Fund, which is under the Office of the President.

The 4th and final salary hike for government workers, meanwhile, will be taken from the Miscellaneous Personnel Benefits Fund (MPBF).

“Thus, even if the bicameral conference meeting goes on for another week – because session adjourns next week, we can actually go on until Friday, February 8, which I’m willing to do, and I’m willing to do beyond [this], a special session if it warrants – these concerns will already be taken care of,” said Legarda.

The 17th Congress failed to pass the 2019 budget before December 31, 2018, which means the government is currently operating on a reenacted budget.

DBM Secretary Benjamin Diokno previously said it would be unconstitutional to release the budget for the SSL without the 2019 General Appropriations Act, causing House committee on appropriations chairperson Rolando Andaya Jr to file case with the Supreme Court against him.

On Monday, the bicam decided to set the cap for their proposed realignments in the 2019 budget at P200 billion.

But they have yet to decide from which departments these alignments will be sourced from nor where the money will exactly go.

Under its version of the budget, the Senate is seeking to realign almost P190 billion, way higher than the P51-billion realignment proposed by the House of Representatives. (READ: Is that pork? Senators say don’t compare their realigned P190B to House’s P51B)

Senators denied the P190 billion is a form of the now-constitutional Priority Development and Assistance Fund. (READ: Lacson asks lawmakers to disclose their 2019 budget amendments)

But amid allegations of pork barrel and fund insertions in the proposed 2019 budget, a seemingly irked Senate President Vicente Sotto III has proposed a reenacted budget for the whole of 2019. House leaders, however, want a new budget to be passed for this fiscal year. – Rappler.com