Jan 31, 2019 11:04 AM PHT
Rappler.com
Facebook Twitter Copy URL
Copied
An unverified text message warning of a bomb planted at the Mlang Pilot Elementary School prompts parents to fetch their children. The bomb threat turns out to be a hoax. 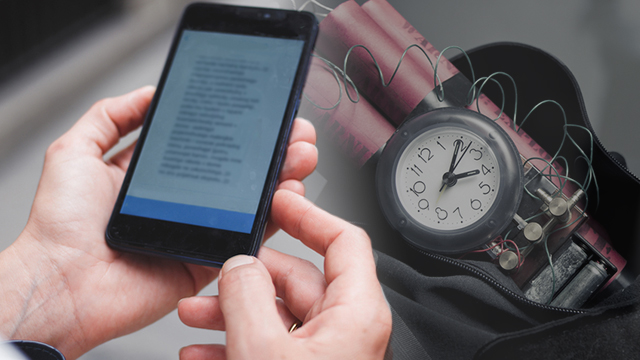 In Mlang, North Cotabato, a text message warning of a bomb planted at the Mlang Pilot Elementary School and was supposedly sent to the school principal spread around town. This caused parents to panic and fetch their children.

The Mlang police, headed by Chief Inspector Jovanie Ladeo, conducted a sweep of the school past 8 am but no bomb was found.

A parent, who did not want to be identified, later told a radio station  that while the message was not verified, he would rather err on the side of caution.

“Better OA than be sorry,” the parent said.

In Ipil, Zamboanga Sibugay, a resident was quoted by a Pagadian-based radio station as saying that he and his family chose not to go to crowded areas following a text message that claimed the town was on the list of bombing targets of the Abu Sayyaf.

“Before the mosque explosion in Zamboanga City, text messages already warned of a bomb exploding there,” the unidentified resident said.

He added that they do not ignore such warnings because they already had a very ugly experience with the Abu Sayyaf in the past.

On April 4, 1995, 53 Ipil residents were killed when the bandit group raided and burned down the town.

SM management released a statement dismissing the text messages supposedly coming from its officials, as a hoax.

The management also said that mall security would ensure the safety of the customers.

As a safety precaution, Davao City Mayor Sara Duterte had banned backpacks from places of convergence, including churches, after the bombing of Jolo Cathedral that left over 20 people killed and nearly 100 injured.

“Please be informed that starting today, for all churchgoers, it is not allowed to bring with you bags, backpacks, knapsacks, boxes, cartons, and the like into the church,” he said. “Only small purses and the like are allowed.”

In September 2016, an explosion at a night market in Davao City  killed at least 14 people and injured more than 60.

On Wednesday, January 30, Secretary Saidamen Pangarungan of the National Commission on Muslim Filipinos said that the recent explosions in Mindanao were obviously part of efforts to further sow division between Christians and Muslims in the Southern Philippines.

Pangarungan issued the statement after the grenade attack on a mosque in Zamboanga City that killed two people and wounded 4 others.

“These bombings had killed and injured Filipinos, and the masterminds behind these acts have caused harm to the entire nation in a divisive effort to further widen the gap between Muslims and Christians,” he said in a statement sent to Rappler.

Pangarungan said  “numerous conjectures and politicking” had worsened the situation. This, he added, was making it “difficult” for the government to address the situation.

“(But) beyond the implied connection with the (Bangsamoro Organic Law) ratification done by media outlets, and the endless discriminatory statements done on social media by thousands of internet users, what we must remember is that any act of violence against one citizen of the State is an act of violence against the whole nation, regardless of religion, despite political affiliations,” he added.

Pangarungan urged Mindanaoans to “not allow these violent occurrences succeed in destroying our long-awaited chance for peace in the South.”

Pangarungan said the Filipino people should “not misrepresent acts of terrorism as a war of religions.”

“(I)nstead, take it as what it is, which are criminal acts against the Republic of the Philippines,” he added.

Pangarungan said the people should continue to pray and mourn for those who were killed instead of exerting efforts to foment hatred.

“We all have a Muslim and a Christian in our lives, be it a neighbor, a friend, or a loved one,” he said. “Let us all remember this: If we allow the thoughts of hatred and discrimination pervade our minds, then we allow the terrorists to further drive a wedge between us Filipinos.” – Rappler.com