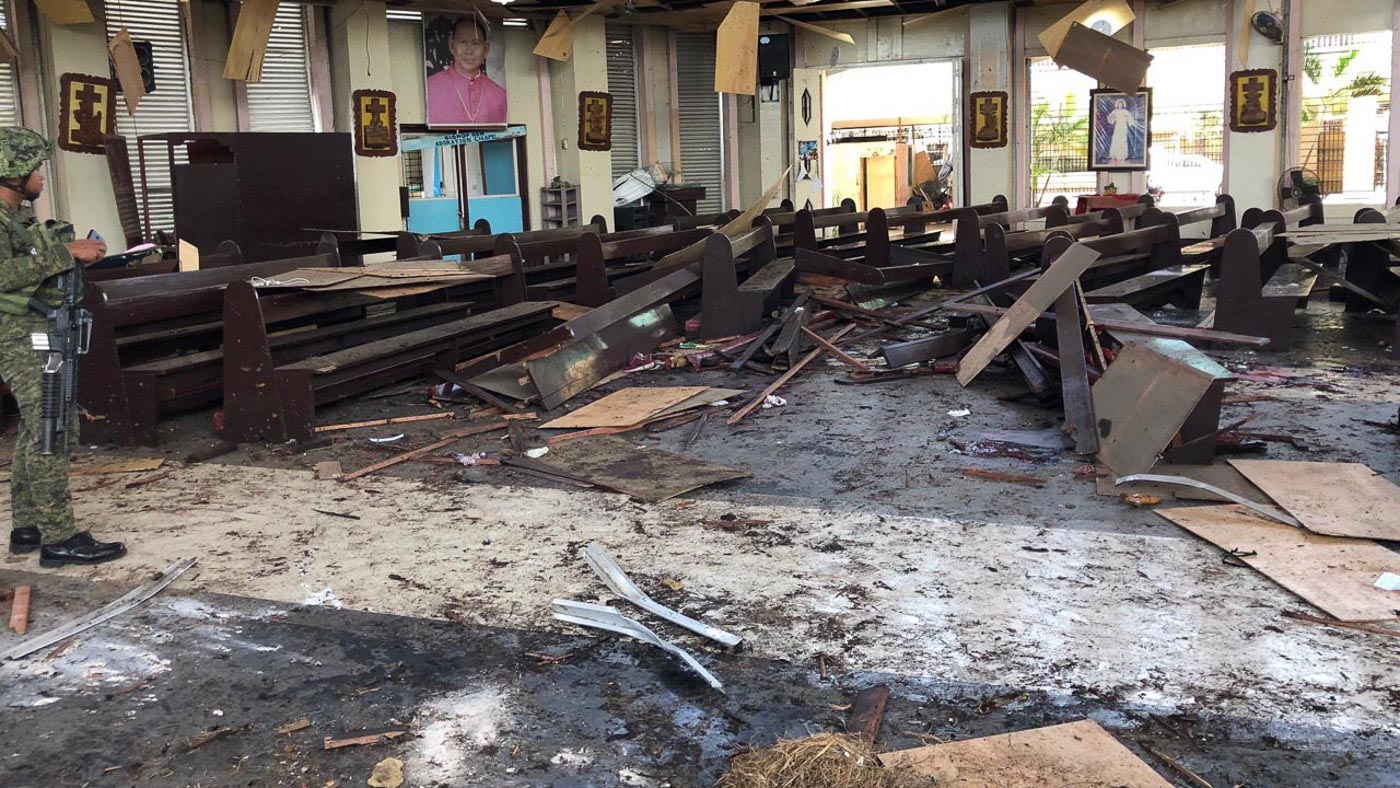 “I am pleased to announce the surrender over the weekend of Kammah Pae and 4 other persons, who performed individual roles in that incident,” Albayalde said in a Camp Crame press briefing.

Kamah, bearing the full name Kammah Pae according to police, has been tagged as one of the local residents who aided the cathedral bombers.

A man believed to be him was previously shown in CCTV clips of movements around the church during the blasts.

The man in the CCTV clips turned out to be just a student and not Kamah, but police said they still believe Kamah to be the main suspect, citing intelligence.

“The suspect really is Kamah because we have an operation against him days back and we had an encounter with them…. Kamah has been threatening this specific cathedral ever since he came back from Sabah,” Albayalde said in an interview with CNN Philippines on January 31.

Kamah was earlier identified as the brother of Abu Sayyaf leader Surakah Ingog, who died in August 2018.

Police and military encountered Kamah in an operation on January 29, but he escaped after a shootout which killed one of his companions.

Four others who have been identified were:

The 5 suspects supposedly surrendered because of “massive hot pursuit operations” by the police and the military.

They are set to face multiple murder and frustrated murder charges for the death of at least 23 and the injuries of over 100 people in the bombing.

Their roles in the Jolo Cathedral bombing: Albayalde said the 5 belong to a group of 22 Abu Sayyaf personalities who orchestrated what they believe to be a case of suicide bombing executed by foreigners.

Albayalde said that of these 22, the mastermind is Abu Sayyaf leader Hatib Hajan Sawadjaan. Kamah, meanwhile, is believed to be part of the team which escorted the alleged suicide bombers.

According to Albayalde, the bomb plot began as early as January 8, when a certain Muksin and Usman attempted to assemble an improvised explosive device (IED) in Latih in Patikul town, Sulu. The two later “abandoned” the effort.

Four days later on January 12, Usman and a certain Barak met with Sawadjaan, who gave them funds to again assemble bombs.

Weeks later on January 24, an unidentified “Asian couple” sailed to Jolo through a pump boat.

Upon arrival, the couple boarded a tricycle to the Caltex gasoline station in Barangay Tiam where they met now-arrested suspects Papong, Awag, and Radjan. The group then left by boarding a jeepney believed to be Awag’s.

Police said the group was spotted with 5 boys believed to be minors.

The group aboard the jeepney then supposedly met up Kamah, Barak, Usman, and a certain Makrim before proceeding to Sitio Bastiong, Barangay Langub in Patikul, Sulu.

In the sitio’s forested area, the couple and the other suspects allegedly assembled with suspected mastermind Sawadjaan to plan the bombing.

A day before the bombing, the couple went to Barangay Latih in Patikul, escorted by Usman, Barak, and 9 other unidentified men. The couple then boarded Awag’s jeep again, this time bound for Jolo.

On January 27, the woman allegedly detonated the first IED at 8:48 am, then the man detonated the second IED at the church entrance “minutes later.” (WATCH: Outside Jolo Cathedral during the bombing)

Foreigners? The PNP is waiting for the results of the DNA tests for the two unidentified bodies found in the Jolo Cathedral area to confirm their theory.

There are still no results, Albayalde said, as the DNA samples had to be delivered to Camp Crame in Quezon City for the tests.

Albayalde added during the briefing that they doubt the Filipinos carried out the bombing because it clashed with the country’s “culture.” He said this would most likely be executed by foreigners.

“There is already [the] presence of suicide bombers in our country. They are being imported by ISIS. Sa atin wala pang ganyan (We don’t have those here),” Albayalde said. – Rappler.com