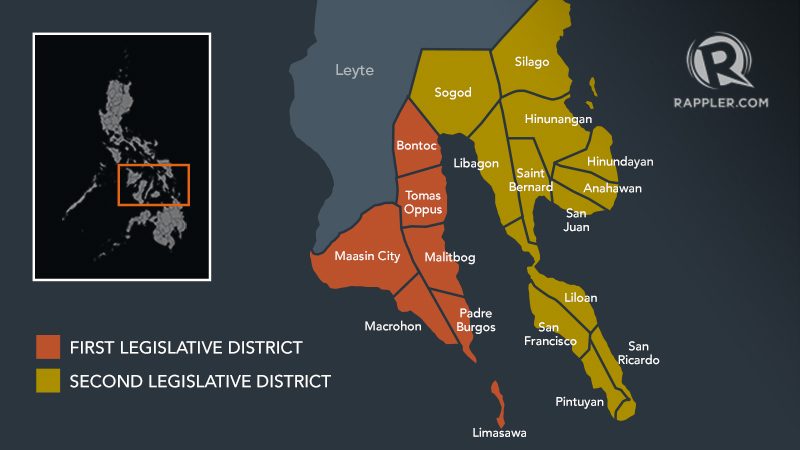 MANILA, Philippines – Southern Leyte will soon have two members in the House of Representatives after President Rodrigo Duterte signed a law dividing the province into two legislative districts.

Duterte signed into law Republic Act No. 11198 on Friday, February 1. Malacañang released the document to media on Monday, February 4.

Southern Leyte used to be a lone legislative district. Its two new districts are the following:

The principal author of the House version of the law is Southern Leyte Representative Roger Mercado. The Mercados are the dominant political family in Southern Leyte, which also happens to be Duterte’s birthplace.

Mercado had been a member of the Liberal Party back in 2016, but he openly supported Duterte’s presidential candidacy, calling him a “fellow Maasinhon.” Duterte was born in Maasin City.

Mercado’s brother is Damian Mercado, the Southern Leyte governor who was dismissed by the Ombudsman in 2017 for “manifest partiality, evident bad faith, or gross inexcusable negligence” in awarding a contract for secondhand vehicles, according to a Philstar report.

Representative Mercado’s son, meanwhile, is the mayor of Maasin City.

The law states that the new districts should be applied to “the next national and local elections after the effectivity of this Act.”

This appears to refer to the upcoming May elections. However, since the period for filing of certificates of candidacy for congressional district posts has ended, it’s not clear if the Commission on Elections (Comelec) will include the two new districts. Comelec Spokesperson James Jimenez said he has yet to receive word on “how [the creation of two Southern Leyte districts] will be treated.”

Previously, Duterte and Congress worked to pass 4 other laws on new congressional districts. These include: