Bicam targets to ratify 2019 budget at the last minute 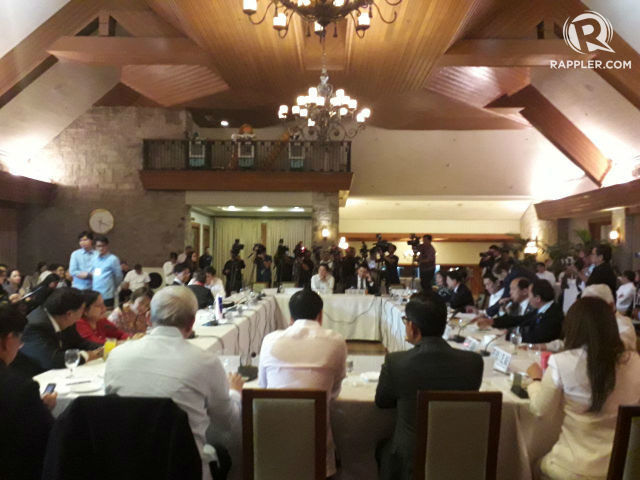 MANILA, Philippines – Legislators are targeting to pass the proposed P3.757-trillion budget for 2019 on Friday, February 8, the last day of session before the 17th Congress adjourns in time for the May polls.

Senate committee on finance chairperson Loren Legarda, a member of the bicameral conference committee on the 2019 budget, announced this on Monday, February 4.

“It was [a] more congenial and open bicam, and I think there’s a breakthrough in a sense. Congressman [Rolando] Andaya and I agreed to meet again on Wednesday in the morning so that we can finalize it for targeted ratification on Friday at the latest. Based on legislative calendar, we may have session for ratification on Friday,” said Legarda.

This was also confirmed by House committee on appropriations chairperson Andaya. He said the bicam would target to finalize their proposed amendments in the 2019 budget by Wednesday, February 6.

If this is followed, Congress would have just two days to fix all the technical details in the 2019 General Appropriations Act (GAA) before the bill is ratified separately by the House of Representatives and the Senate on Friday.

Both houses of Congress must ratify the 2019 GAA before President Rodrigo Duterte can sign it into law. The government is currently operating on a reenacted budget from 2018 after lawmakers failed to pass the GAA by December 31, 2018.

The bicam already decided to set the cap for their proposed realignments in the 2019 budget at P200 billion. But they have yet to decide from which departments these alignments will be sourced from or where the money will go exactly.

On Monday, Andaya and Legarda met and agreed that some of the beneficiaries of these realignments would be programs of the Department of Health, state universities and colleges, Commission on Audit, and the Office of the Ombudsman.

But Andaya said they have yet to decide on how much these reallocations will be.

“No specific amount yet. As I said, we still have not identified where to source the money. We cannot divide what we don’t have,” said Andaya in a mix of English and Filipino.

Over the weekend, Andaya warned that the bicam would not approve the 2019 budget if Budget Secretary Benjamin Diokno does not release the list of government savings in 2018. Andaya said this list would allow the bicam to get a “clear picture of our spending authority.”

But Executive Secretary Salvador Medialdea said reporting government savings is not a prerequisite to approving the national budget.

The bicam previously agreed to remove all allocations for dredging projects in the 2019 budget, as these are “milking cows” for corrupt politicians. – with reports from Camille Elemia/Rappler.com