Feb 6, 2019 11:20 AM PHT
Carmela Fonbuena
Facebook Twitter Copy URL
Copied
'In North Cotabato, the political leaders are not against inclusion of the barangays.... The people are free to vote,' says Naguib Sinarimbo of the MILF's United Bangsamoro Justice Party 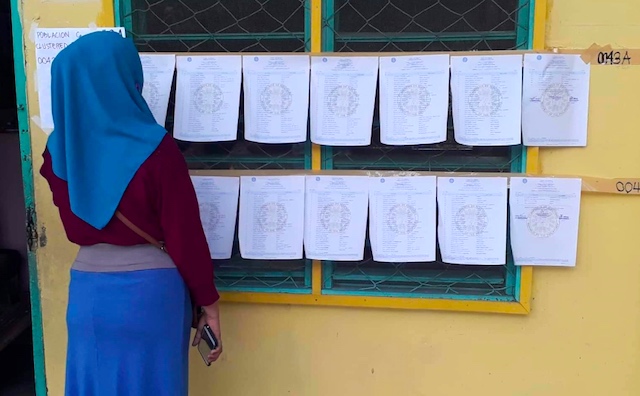 LANAO DEL NORTE, Philippines – Advocates of the “yes” campaign see the expansion of the Bangsamoro Autonomous Region in Muslim Mindanao (BARMM) after the second part of the plebiscite on Wednesday, February 6.

“We feel that it’s going to be an easier win in North Cotabato. It’s not 100% but BOL can win in several areas,” said Sinarimbo.

“There is a level of consent coming from the municipality,” Sinarimbo said.

“Yes” campaigners have been circulating the message of  Pikit Mayor Sumulong Sultan in an event supporting BOL. “

Mahal namin kayo (We love you) but we have to let you go,” Sultan said, addressing the barangays.

The support of North Cotabato officials for BOL is in stark contrast to the situation in Lanao del Norte, where the Dimaporo clan that has ruled the province for decades is opposed to losing any of the towns under Lanao del Norte’s jurisdiction. (READ: Dimaporos expect ‘landslide victory’ to keep Lanao del Norte provinces out of BARMM)

“There’s a better chance in North Cotabato than in Lanao del Norte. In North Cotabato, the political leaders are not against inclusion of the barangays. The campaign is easier. The people are free to vote,” Sinarimbo said in a mix of Filipino and English.

He said “yes” campaigners found it hard to assemble in Lanao del Norte and lamented the  massive disinformation campaign in the province, citing “no” banners that use President Rodrigo Duterte and Commission on Elections logos.

“In contrast, the ‘no’ campaign led by the dynasty in Lanao del Norte is very active. They used all the means at their disposal to campaign for “no,” Sinarimbo said.

“There might be a fighting chance because there is support among Christian voters,” said Sinarimbo, who contested Dimaporo’s claims that Christians will vote “no.”

“Sana mixed ang yes at no (Hopefully there would be a mix of yes and no),” he said.

The second plebiscite on Wednesday covers voters of Lanao del Norte – except Iligan City – and 7 towns in North Cotabato.

Voters of 22 Lanao del Norte towns are asked the question of whether or not 6 municipalities in the province should be part of the BARMM. These towns are Tagoloan, Balo-i, Pantar, Munai, Nunungan, and Tangcal.

Assuming that majority of the voters in the 6 towns vote “yes,” this does not automatically make them part of BARMM.

The BOL allows the rest of the 16 towns of Lanao del Norte to have the final say. If majority of voters in these voting towns reject inclusion for the 6 towns, then BARMM will lose in Lanao del Norte.

The same is true in North Cotabato’s 67 barangays (villages).  Assuming the 67 villages say yes, that’s not the final vote on it.

Majority of the voters of the 7 towns they belong to should also say yes to inclusion. These towns are  Aleosan, Carmen, Kabacan, Midsayap, Pigkawayan, Pikit, and Tulunan. – Rappler.com