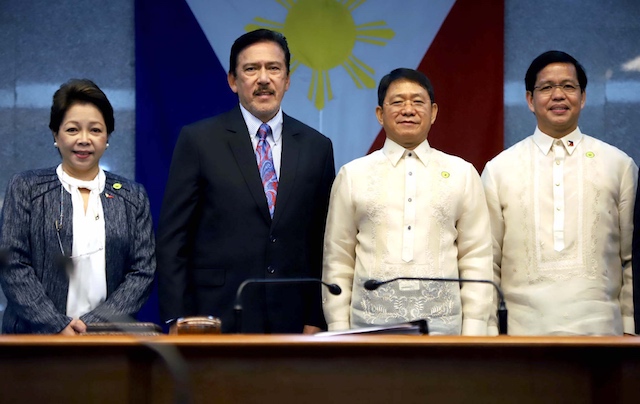 “With him as DILG OIC, crime volume has reportedly dropped…. He’s also been recognized as an active member of the Boracay inter-agency task force and a key to rehabilitation efforts of DILG,” Angara said.

During his confirmation hearing, Año reiterated that the Jolo bombing is “considered solved,” following the identification, arrest, and death of suspects.

Año is a 1983 graduate of the Philippine Military Academy (PMA) and a veteran intelligence officer. He was appointed military chief in December 2016. Año first served as DILG officer-in-charge in January 2018, and took his oath as secretary in November 2018.

Meanwhile, the CA panel on labor, employment, and social welfare, headed by Masbate Representative Scott Davies Lañete, pushed for Bautista’s confirmation, saying the DSWD chief “is worthy, competent, and qualified to the post.”

But before getting the commission’s nod, Bautista was grilled on the change of the DSWD’s stand on the proposal to lower the minimum age of criminal responsibility (MACR) during his term. (READ: DSWD backs lowering criminal liability age to 12)

Senator Risa Hontiveros expressed disappointment over the change in position as she pointed out that previous DSWD heads opposed lowering the minimum age, currently at 15 years old. (READ: Why experts strongly oppose lowering the age of criminal responsibility)

“Recently, Sir, the department now reportedly backs the lowering of MACR to 12. Being the lead agency in social protection, shouldn’t the department be spearheading the campaign against lowering MACR?” Hontiveros said.

Bautista attributed the change the DSWD position to “a working study” they conducted, which supposedly shows that lowering the age to 12 would be helpful in “prevention and deterrence.”  (READ: Beyond juvenile delinquency: Why children break the law)

He also cited data from the Philippine National Police, supposedly showing a high number of minor offenders from 2016 to 2018.

“But your honor, the department will leave it to the Senate and the House of Representatives to determine…. If and when passed into law, then the DSWD should be ready to implement,” Bautista said.

“What is more important though is the proper implementation in the meantime of both RA (Republic Act) 9344 and its amended version RA 10630, and setting the standards for Bahay Pag-Asa’s nationwide,” he added.

Hontiveros contradicted Bautista’s answers and said the problems would be addressed by properly implementing the Juvenile Justice and Welfare Act 2006. The law was amended in 2013 through Republic Act 10630, which retains the minimum age at 15 but allows children as young as 12 to be detained in youth care facilities or Bahay Pag-asa only for serious crimes such as rape, murder, and homicide, among others.

Hontiveros also pointed out that data from the PNP showed a downward trend of crimes committed by minors, accounting to only 1.7% of the total crimes. (READ: Children in conflict with the law: Cracks in Juvenile Justice Act)

Bautista, who hails from Pangasinan, graduated from the Philippine Military Academy in 1985 as part of the “Sandiwa” class. Prior to his appointment, he served as the commander of the Presidential Security Group (PSG) which was cut short as he was deployed to Mindanao in March 2017 to aid the fight against terror groups.

A few weeks before the Marawi clashes ended, Bautista was promoted to commanding general of the 90,000-strong Philippine Army.

Aside from the two former military officials, the CA also confirmed Aileen Lizada as Commissioner of the Civil Service Commission, 5 officials of the Department of Foreign Affairs, and the promotion of 43 senior military officers.

The military officers include Philippine Military Academy Superintendent General Ronnie Evangelista and Marine Colonel Ferdinand Marcelino, who was detained in 2016 over drug charges.

Marcelino broke into tears during the hearing as he recalled his time in prison. (READ: Marcelino’s freedom a deal to pin me down – De Lima) – Rappler.com