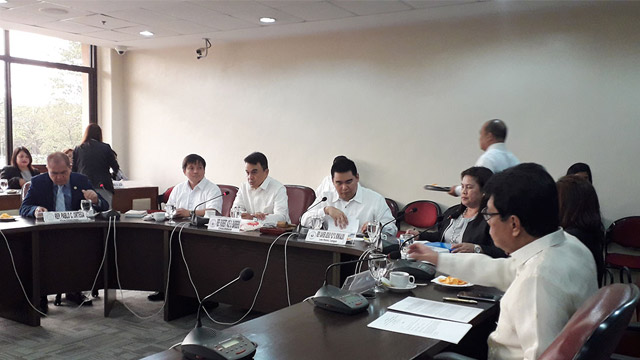 MANILA, Philippines – Two House committees do not find former Bureau of Customs (BOC) commissioner Isidro Lapeña liable over the billions of pesos worth of shabu smuggled into the country under his term.

The committee report of the House panels on dangerous drugs, and good government and public accountability, which was approved on Wednesday, February 6, is similar to the report of the Senate blue ribbon committee chaired by Senator Richard Gordon.

Both reports tackled the separate investigations of the House and the Senate into the intercepted P2.4-billion shabu shipment and the “missing” shabu worth P11 billion last year. (READ: ‘All circumstances’ show magnetic lifters packed with shabu – Barbers)

The House committee report did say corrupt practices in the BOC during Lapeña’s time made the country’s ports “vulnerable” to smuggling.

But lawmakers merely recommended a “deeper probe” into the matter to be conducted by the appropriate House panel.

Some lawmakers had slammed Lapeña’s transfer, saying the latter’s “promotion” was aimed to protect him from the findings of the congressional investigations. (READ: At the Bureau of Customs: How Isidro Lapeña was outplayed)

Who could face charges instead? Lawmakers recommended the filing of criminal charges against the following for violating Section 4 on the importation of dangerous drugs under Republic Act No. 9165 or the Comprehensive Dangerous Drugs Act of 2002:

What else did the committee report say? The other recommendations of the two House committees are:

“It’s like the minute something like this happens again, even if they are protected under civil service…then a one-strike policy [be in place so] that they [will] be removed from government service,” said Vergara.

The House committees accepted the amendments proposed by Teves and Vergara. – Rappler.com