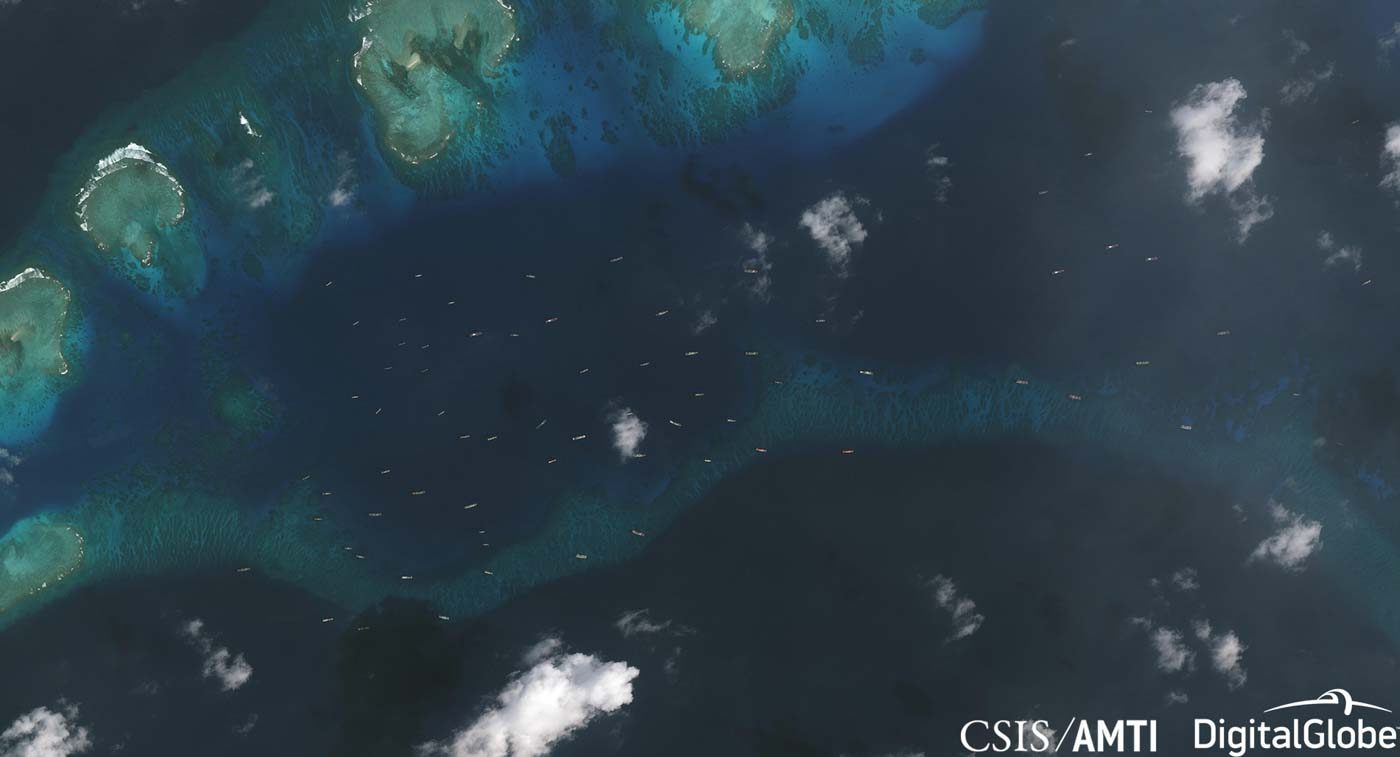 MANILA, Philippines – China deployed its maritime militia to the vicinity of Pag-asa Island (Thitu Island) in the West Philippine Sea (South China Sea) after the Philippines began constructing on the island, an international think tank said.

The Asia Maritime Transparency Initiative (AMTI) of the Washington-based Center for Strategic and International Studies (CSIS) said that “a handful of Chinese vessels have operated in the area between Subi and Thitu since at least July 2018.”

The AMTI said this was “likely in response to the initial Philippine effort to start runway repairs” on Pag-asa Island in May 2018.

“But their numbers increased to at least 24 on December 3, just before the current construction operations began. In 5 subsequent satellite images captured from mid-December to late January, their numbers fluctuate, reaching a high of 95 on December 20 before dropping to 42 by January 26,” said the AMTI.

Defense Secretary Delfin Lorenzana said on February 4 that the Philippines aims to finish a beaching ramp on Pag-asa Island “within early 2019,” the Philippine Daily Inquirer reported. The AMTI said the ramp “will facilitate the delivery of construction equipment and materials to the island for further planned upgrades,” especially to its crumbling runway.

The AMTI said it had “tracked the start of repair work on the runway in May 2018, but that appears to have been halted while the beaching ramp is completed.”

“More recent imagery from January 11 and 26 of this year show that the reclamation work is more ambitious than a simple beaching ramp,” said the AMTI. Satellite images “reveal excavators depositing sand over an area of approximately 8 acres, or more than 32,000 square meters, to the north of the existing causeway.” 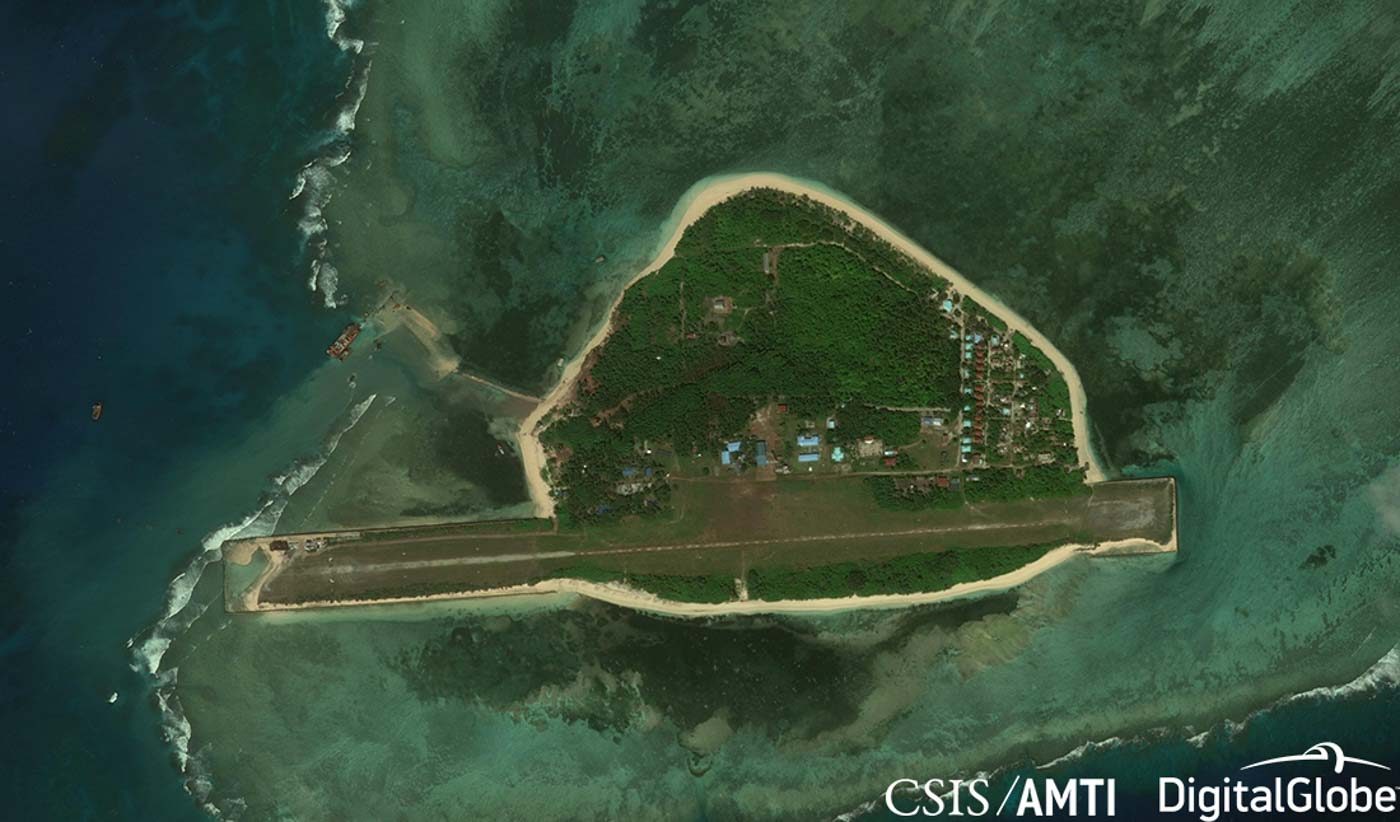 “It seems unlikely that this area of new landfill, the equivalent of about 3 city blocks, is meant only as a staging area for materials and equipment brought in to repair the runway. Lorenzana has previously said that the Philippine government plans to construct a fish port, desalination plant, solar power array, improved housing, and marine research facilities on Thitu,” said the AMTI.

In April 2017, President Rodrigo Duterte ordered the military to occupy islands in the West Philippine Sea, and to “build structures” and raise the Philippine flag in those areas. A few weeks later, Lorenzana led security officials in a visit to Pag-asa Island, and said P1.6 billion had been allocated to proceed with long delayed plans to construct facilities in the island, mainly for runway repairs.

The think tank said China responded to this new construction “by deploying a large fleet of ships from Subi Reef, just over 12 nautical miles southwest of Thitu.”

This fleet includes “several People’s Liberation Army-Navy (PLAN) and China Coast Guard (CCG) ships, along with dozens of fishing vessels ranging in size from 30 to 70 meters.”

The AMTI said the fishing boats “have mostly been anchored between 2 and 5.5 nautical miles west of Thitu, while the naval and coast guard ships operate slightly farther away to the south and west.”

“This deployment is consistent with prior examples of China’s ‘cabbage strategy,’ which employs concentric layers of fishing, law enforcement, and naval vessels around contested areas,” said the AMTI.

“The fishing vessels display all the hallmarks of belonging to China’s maritime militia, including having no gear in the water that would indicate fishing activity and disabling their Automatic Identification System (AIS) transceivers to hide their activities (for instance, on December 20 only one of the 95 or more vessels engaged in the deployment transmitted AIS data),” the group added.

The think tank also noted a decrease in Chinese government vessels between January 11 and 26.

“The drop in the number of government vessels, mirroring the reduction of the militia presence, suggests Chinese forces have settled into a pattern of monitoring and intimidation after their initial large deployment failed to convince Manila to halt construction,” said the AMTI.

China’s deployment of maritime militia comes as its militarizes the West Philippine Sea despite an international ruling in 2016 that upheld the Philippines’ rights over these waters.

Recently, China announced it has opened a “maritime rescue center” on Kagitingan Reef (Fiery Cross Reef) in the West Philippine Sea, with Malacañang reacting that the Philippines should be thankful for this. – Rappler.com