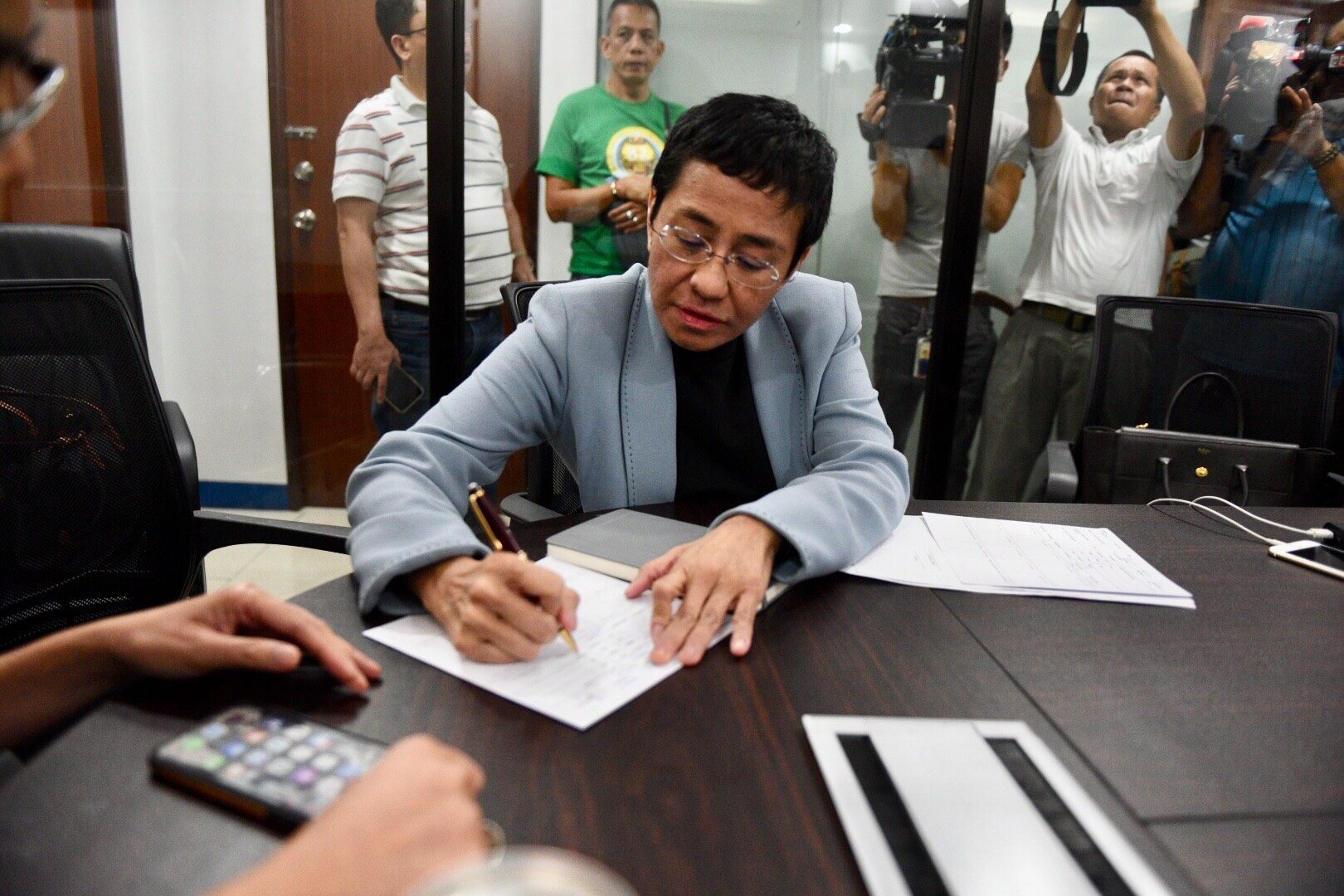 Facebook Twitter Copy URL
Copied
(UPDATED) 'If somehow the government feels that by keeping me the night, they can intimidate me, no, we will hold the line,' says Maria Ressa

MANILA, Philippines (UPDATED) – Rappler CEO and executive editor Maria Ressa will have to spend Wednesday night, February 13, in the custody of the National Bureau of Investigation (NBI) after a night court judge refused to process her bail.

Ressa went through medical and booking procedures at the NBI headquarters in Manila, a process which began past 8 pm Wednesday night and lasted until almost 12 midnight of Thursday, February 14.

Ressa will spend the night at the conference room of the NBI Cybercrime Division, where she is allowed to have companions and lawyers.

Ressa said the handling agents of the NBI have “been kind.”

Ressa was arrested past 5 pm Wednesday by NBI agents at the Rappler headquarters in Pasig City. Lawyers proceeded to the Pasay Regional Trial Court, where there is a designated night court, to process bail, but they were refused.

“Efforts were made for Ressa to post bail tonight at the Pasay night court. Unfortunately, the judge refused to accept the bail despite having the power to do so under Rule 114 section 17 of the Rules of Court,” Rappler said in a statement.

“There was some concern expressed by the judge that perhaps he didn’t have the jurisdiction because he is a Metropolitan Trial Court Judge and this is a case before the Regional Trial Court, but the law says he did have the authority to release but it got to the point where the court actually shot us down, so there were no other options,” Disini said.

Disini added that there was another night court in Quezon City but it closed at 6:30 pm, “so Pasay would have been the place to file.”

NBI officials did not speak to media on Wednesday.

“If somehow the government feels that by keeping me the night, they can intimidate me, no, we will hold the line,” Ressa said. (READ: ‘Persecution by a bully government’: Journalists, politicians slam arrest of Maria Ressa)

Ressa was ordered arrested by the Manila Regional Trial Court Branch 46 in a warrant dated February 12.

The case stemmed from a cyber libel complaint filed by the Department of Justice “about two weeks ago,” according to Justice Secretary Menardo Guevarra.

The indictment was served upon Ressa only on February 4, but Guevarra said a case can already be filed without prejudice to the filing of an appeal before the justice department.

The complaint involves a Rappler article published in May 2012. The cyber libel law was enacted only in September 2012. Rappler updated the article in February 2014 and made some edits to correct some typographical error.

In its resolution, the DOJ noted that the republication is covered by the multiple publication rule.

Ressa said that in her more than 3 decades of being a journalist, this is her first time to be detained.

“There’s always a first. I’m trying to find the glass half full part of this…. I’m okay. I’m fine. I alternate between raging and also just being professional. We will continue to do what’s right. I call on the government to observe the rule of law,” Ressa said. – Rappler.com