Feb 17, 2019 6:33 PM PHT
Agence France-Presse
Facebook Twitter Copy URL
Copied
The unrest is the latest upsurge of discontent over corruption and poverty in the Caribbean half-island where protesters want the ouster of President Jovenel Moise 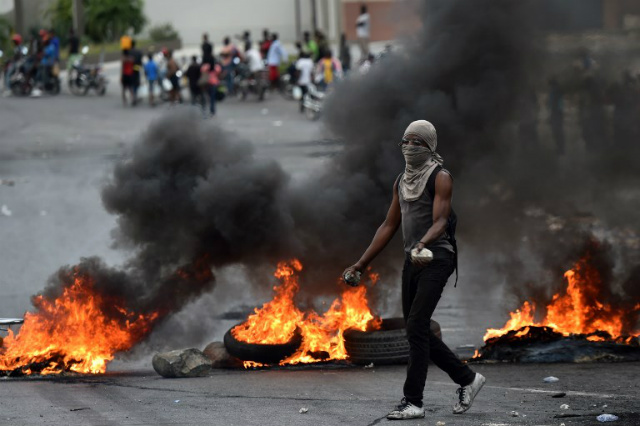 PORT-AU-PRINCE, Haiti – Government officials in Haiti, one of the world’s poorest countries, will lose their perks under emergency economic and anti-corruption measures announced Saturday, February 17, by Prime Minister Jean-Henry Ceant after days of deadly protests.

The unrest is the latest upsurge of discontent over corruption and poverty in the Caribbean half-island, where protesters want the ouster of President Jovenel Moise.

At least 7 people have died in Haiti since February 7 when the latest protests began.

“The first decision is to cut the prime minister’s budget by 30%,” Ceant said in a 20-minute address which suggested the presidency and parliament take similar measures.

“We also need to withdraw all unnecessary privileges for high-level government officials, like allowances for gas and telephones, needless trips abroad, and the amount of consultants,” he said on state television.

Three-fifths of Haiti’s population of nearly 11 million live below the poverty line of $2 a day.

Ceant said there will be a focus on the fight against corruption and cross-border smuggling, while meetings with the private sector will be held to consider raising the minimum wage.

Protests have grown since a sporadic movement began last summer over a scandal linked to a Venezuelan aid program known as Petrocaribe.

Through Petrocaribe, Venezuela for years supplied Haiti and other countries with oil at cut-rate prices and on easy credit terms.

Investigations by the Haitian Senate in 2016 and 2017 concluded that nearly $2 billion from the program was misused.

After at least 3 people were killed by gunfire during protests in late November, Ceant promised a crash program to create jobs in poor neighborhoods, and assured that he was hearing the complaints of young Haitians.

His comments Saturday came after Moise on Thursday broke his silence during the latest unrest, by saying he “will not leave the country in the hands of armed gangs and drug traffickers.”

Canada, one of Haiti’s largest international donors, on Thursday temporarily closed its embassy because of “the current volatility,” while the State Department in Washington ordered the departure of all “non-emergency US personnel.” – Rappler.com