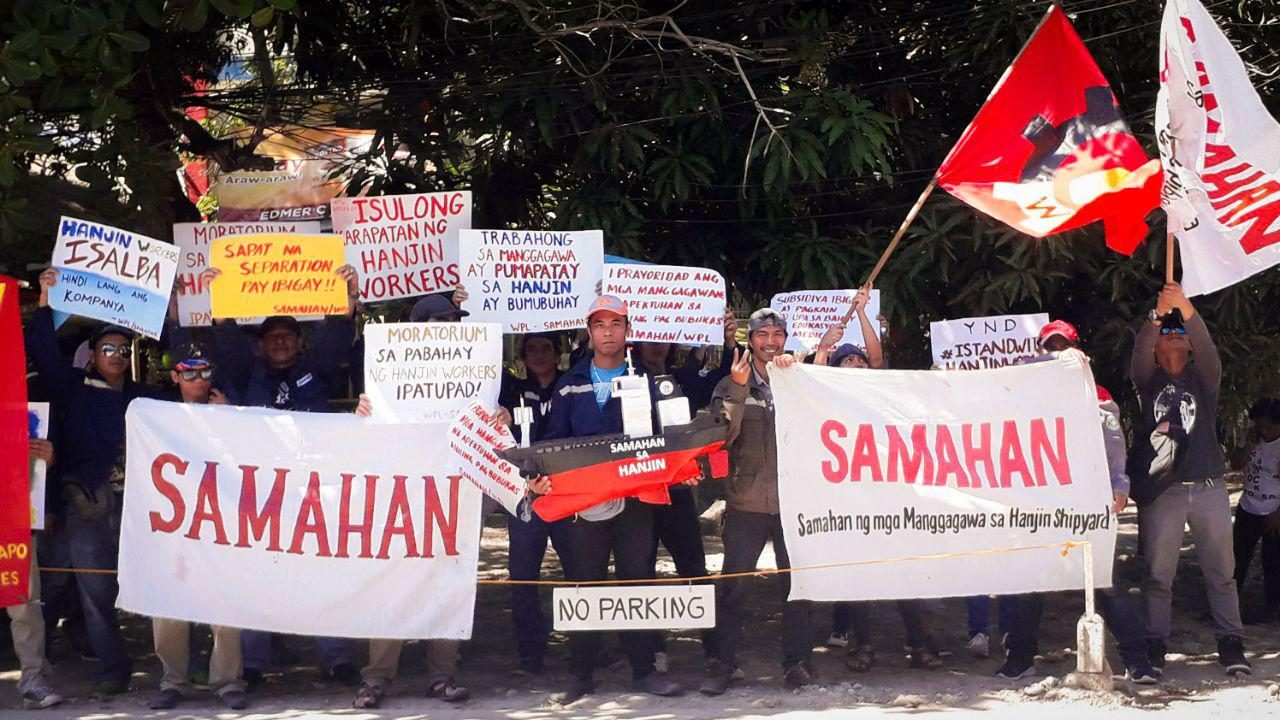 Remaining employees argued that the management “forced” them to sign under the voluntary retrenchment program of the firm. But they fear that the 3% salary cut for training will not be returned to them as it was not included in the terms of the package.

(We were asked to sign the voluntary retrenchment [form]. We were told that if we don’t sign, we would only receive half of what is being offered when the firm closes down.)

Hanjin is offering separation pay of one month worth of salary per year of service for those who opt to leave the firm earlier.

Since January, the number of workers has gone down to around 1,000, from 3,696. Of the current figure, only around 110 employees did not sign for voluntary retrenchment.

Those who opted to stay may get separation pay of only 15 days worth of salary per year of service instead.

If Hanjin experienced severe losses, the law allows it to give its workers as low as 7 days worth of salary per year of service only.

But some workers would rather risk getting much smaller separation pay, than accepting Hanjin’s retrenchment plan.

Why not accept the offer?

Hanjin workers’ group president Efren Vinluan told Rappler that if they accept the deal, they would find it hard to claim the money they paid for their training bond.

Just like any other employer, Hanjin spent for workshops and equipment used to train its workers.

This arrangement “binds” the worker to pay 3% of his or her biweekly salary for the next 10 years (or 5 years for some), just to make sure they won’t suddenly leave the company after receiving training.

(We are appealing to the management that they give back to everyone the 3% cut from the workers’ salaries because it’s the workers’ money.)

During the dialogue between the management and the workers, DOLE Central Luzon Director Zenaida Campita told Hanjin that they should return the training bond because of the closure.

(They will not sign because they might lose the money they paid for the bond, because of the voluntary retrenchment. What we are negotiating is that you return the workers’ money because it wasn’t their decision to close down. They actually wanted to complete the 10 years.)

Campita said Hanjin “seemed amenable” to returning the training bond, but only to the 3,696 workers left with them since January.

All workers, not just some

But Vinluan said they will not accept Hanjin’s decision to return the money of only select workers.

It should be for everyone, he said.

(It’s for their families and they worked hard for it. That’s the only thing we’re asking for – not only for the remaining workers, but for everyone who agreed to the voluntary retrenchment.)

Hanjin reportedly had over 28,000 workers at its peak. Last December, it reportedly laid off 7,000 employees.

Campita said Hanjin should not “disregard” the workers’ plea, but also said that those who have signed up for the retrenchment program may file a case with the National Labor Relations Commission as a group or as individuals.

DOLE also assured the workers that it will assist them in finding new jobs.

It is considered as the biggest loan default in Philippine history, but government regulators say it will have “minimal impact” on the banking system. (READ: Banks downplay Hanjin crisis impact)