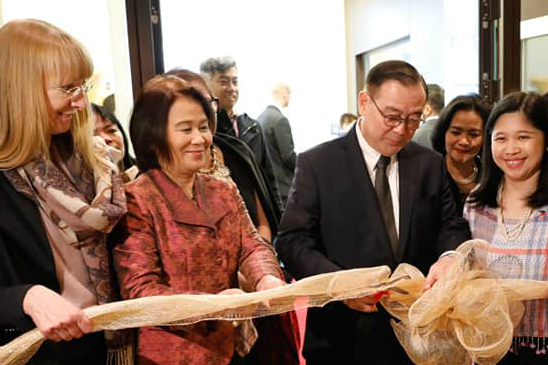 In a tweet, Berlin-based ARD-Hauptstadtstudio journalist Arnd Henze said: “Philippine acting Ambassador has been summoned by Germany’s Foreign Ministry. It has been made very clear that the remarks by [Locsin] were totally unacceptable.”

UPDATE: Philippine´s acting Ambassador has been summoned by Germany´s Foreign Ministry. It has been made very clear that the remarks by @teddyboylocsin were totally unacceptable. https://t.co/KiRZxDgrIm

Lilibeth Pono is currently the Philippine Chargé d’Affaires to Germany.

Locsin attended the Munich Security Conference in Munich, Germany, last week. He also led the formal inauguration of the new chancery in Berlin on Monday, February 18.

In an interview with ARD on Monday, Locsin defended Duterte’s comparison of himself as the “cousin of Hitler.” In September 2018, Duterte drew parallels between Hilter’s annihilation of 3 million Jews and his controversial campaign against illegal drugs.

“No. This is how he expresses himself. Remember his policy, according to surveys, inspire greater confidency. Why would he give up on that?” Locsin told ARD.

The Department of Foreign Affairs on Thursday evening said that ARD’s story on Locsin’s remarks was “incomplete and misleading.”

“The Department views as unfortunate the biased representation by Mr Arnd Henze of ARD Capital Studio Berlin of his interview with Foreign Affairs Secretary Teodoro L. Locsin, Jr. at the sidelines of the opening ceremony of the new building of the Philippine Embassy in Berlin,” it said.

“The video posted by Mr Henze on his blog is incomplete and misleading. It failed to show Mr. Henze’s deliberate attempts to provoke Secretary Locsin into giving controversial remarks,” it added.

Duterte’s 2018 reference to Hitler sparked condemnation, with the German government calling it “unacceptable.” The German foreign ministry also summoned the Philippine ambassador then to discuss the matter.

Henze also uploaded screenshots of Locsin’s remarks that “some of the things Hitler did were right.”

Locsin has been tweeting such remarks even before he was appointed foreign affairs chief in October 2018.

“I believe that the drug menace is so big it needs a final solution like the Nazis adopted. That I believe. No [rehabilitation],” Locsin said in a tweet that went viral in August 2016.

On Thursday, February 19, Reporters Without Borders Germany board member Martin Kaul took a swipe at Locsin for the Hitler remarks.

“This is why we care that no one will ever again use Hitler as a reference to his politics. Maybe you might want to use your stay here to learn from us what our generation has learned,” Kaul told Locsin on Twitter.

In response, Locsin cited Hitler’s economic ministers “brilliant” deed, saying “we must give credit where it is due.”

I got hell when I said what was true: Hitler’s economic minister Hjalmar Schacht set up our brilliantly anti-inflationary Central Bank after prison in Spandau. But we must give credit where it is due—even to a Nazi. I have his autographed Autobiography. https://t.co/dAL1S4zOCM

Various groups have called out Duterte as well, among them Human Rights Watch, which said referencing Hitler and the Holocaust “are on their face obscene.”

Hitler is remembered now as a brutal tyrant under whose leadership the Nazis carried out the mass extermination of Jews in Europe during World War II.

Six million Jews were killed in the attempt to “purify” the German race by eliminating all non-Aryans. (READ: LOOK BACK: Hitler and the Holocaust) – Rappler.com