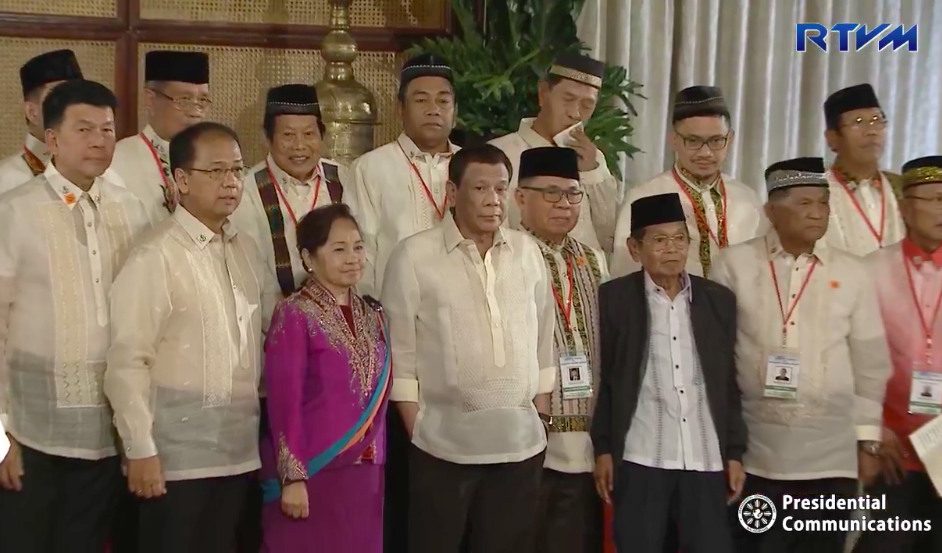 MANILA, Philippines – Malacañang finally released the appointment papers of 76 Bangsamoro Transition Authority (BTA) members on Wednesday, February 27, or 5 days after they took their oath of office.

Here is the list of BTA members with appointment papers:

President Rodrigo Duterte still has to name 4 more people in order to complete the BTA which must have 80 members.

Naguib Sinarimbo, a lawyer who was tapped to be part of Murad’s Cabinet as head of the Ministry of Local Government, has not been appointed into the BTA yet but the BOL states that Cabinet members need not all be part of the BTA.

Other BTA members were nominees of another Muslim group, the Moro National Liberation Front. However, these are the nominees of just one of its factions, the one led by Yusop Jikiri. The rest were chosen by the Philippine government.

The BTA is the body that will serve as the BARMM’s government from 2019 to the 2022 elections.

Duterte led the oath-taking of the BTA members in a special ceremony in Malacañang on Friday, February 22.

Among the more colorful characters now in the BTA is Abdullah Macapaar, also known as Commander Bravo.

Macapaar was commander of the MILF’s base in Lanao del Norte, where Bangsamoro advocates failed  to win 6 towns for the BARMM.

Duterte sounded fully supportive of Macapaar’s inclusion into the BTA, saying he “took the brunt” of the violence in Mindanao.

Duterte also admitted that he was late for the ceremony because of last-minute changes in the list of BTA appointees.

“Kaya ako late, may hinabol sila, may in-exchange (That’s why I was late. They had to rush in some names, to be exchanged),” he told reporters.

The gathering was scheduled to take place at 3 pm but Duterte arrived around 5:30 pm.

The BTA will have the wider powers promised in the Bangsamoro Organic Law (BOL) for the new autonomous region.

These powers include the administration of its own justice system, fund-raising, alteration of boundaries of municipalities and barangays, and development of culture and education.

But the BTA’s immediate concern is craftng a transition plan. Under the BOL, within 60 days after the BTA is formed, the chief minister needs to submit a transition or phaseout plan which the BTA will approve as a body.

The proposal must include an organizational plan and implementation schedule.

The BTA will also need to craft priority laws such as administrative, local government, and electoral codes.

The 25 incumbent officials of the Autonomous Region in Muslim Mindanao are automatically BTA members. They will serve in the BTA until June 30, 2019, so until then, the BTA will number 105 members. However, ARMM governor Mujiv Hataman declined his seat in the BTA as he is running for Basilan congressman. – Rappler.com