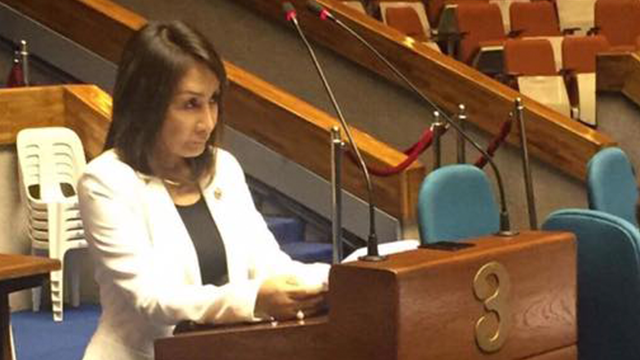 MANILA, Philippines – Cebu 3rd District Representative Gwen Garcia has accused 3 news organizations of being influenced by her political rival in a bid to expedite her graft trial before the Sandiganbayan.

In a pleading submitted to the anti-graft court Sandiganbayan 2nd division, Garcia said the court must act “with urgency” because “Vice Governor Agnes Magpale has used this case for blatant political mileage.”

Garcia then proceeded to cite articles of ABS-CBN, GMA, and Rappler as proof of Magpale’s alleged “black propaganda” against her.

Rappler strongly takes exception from the accusation that Magpale – or any personality – can influence its editorial decisions.

The stories were published on November 20, 2018, when the 2nd division junked Garcia’s motion to dismiss the two counts of graft and one count of technical malversation pending against her –  charges which stemmed  from the controversial Balili property in Cebu.

The stories all used the word “affirm” in the headlines to describe the decision of the Sandiganbayan in junking Garcia’s appeal and proceeding with the case.

“As seen in the practically identical headlines in three news sources, Magpale appears to have even misrepresented this Honorable Court’s latest ruling on Congresswoman Garcia’s Motion to Dismiss as an affirmation of the supposed malversation and graft charges against her.”

The 3 stories do not mention Magpale even once. Garcia and Magpale are going head to head for the governorship of Cebu in the 2019 elections.

Besides saying that the 3 stories used the word “affirm” in their headlines, Garcia did not present any evidence or argument for her assertion that Magpale was behind the news reports.

Last January 28, Garcia again lost her appeal after the same set of justices voted 3-2 to deny her motion for reconsideration on the earlier denied motion to dismiss.

Garcia’s ground was that the 7 years that charges against her were pending in court constitute inordinate delay.

Having lost two rounds of appeals, Garcia in her latest pleading requested the Sandiganbayan to expedite the procedure in accordance with the Revised Guidelines on Continuous Trial.

Garcia added, “As will be explained below, Congresswoman Garcia’s political opponents have continued to use this pending case as black propaganda against her to besmirch her reputation.”

Garcia did not reply to Rappler’s question on Friday, February 22, on the factors that drove her to conclude Magpale influenced the news stories.

Garcia is facing multiple legal battles, because aside from her ongoing trial at Sandiganbayan, the Office of the Ombudsman dismissed Garcia from service in February 2018 after finding her guilty of grave misconduct, still related to the Balili property cases.

The Omnibus Election Code still allows her to run despite her dismissal, without prejudice to the filing of a disqualification case against her. – Rappler.com