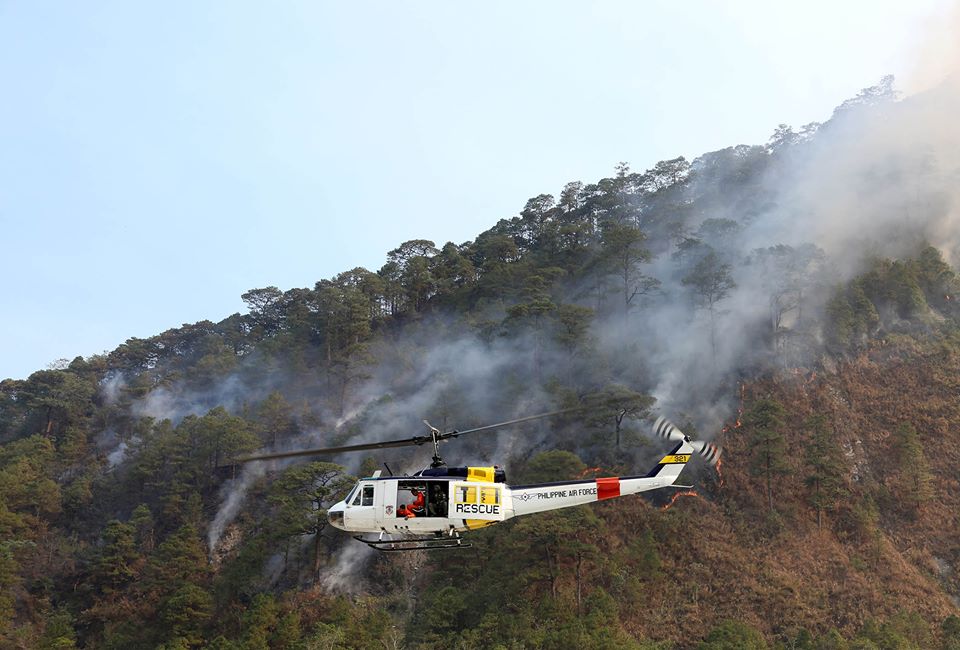 BAGUIO, Philippines – Aided by the cloudless weather and fierce wind, forest fires have been rampaging the mountain region for days now, killing at least 5 people in Benguet.

The bodies of 5 men were recovered after a huge forest fire engulfed Eastern Sal-angan in Ampucao, Itogon, Benguet before noon Wednesday, February 20.

According to Philex, the fire started at around 7:30 am.

“Philex firefighters were immediately dispatched to put the fire out, but they were not able to control the fire’s rapid forward spread due to the windy condition,” Philex said.

“Philex employees, residents of the Padcal community, service providers, as well as teachers and students of the Saint Louis High School pitched in to assist in firefighting efforts, but the sheer magnitude of the blaze could not be suppressed. Firefighters from the municipalities of Tuba and Itogon, from Baguio City, the Philippine Military Academy (PMA), the Philippine Export Zone Authority (PEZA), and from Delta Earthmoving, Incorporated also came to help,” it added.

“We condole with the families of the bereaved and pray for the souls of our co-employees for their supreme sacrifice in the line of duty,” said Eulalio Austin Jr, president and CEO of Philex Mining Corporation.

The National Grid Corporation of the Philippines said the fire also affected power in Benguet after it hit its facility in Sal-angan, Ampucao. Power was restored after 6 pm on Wednesday.

The fire was said to have been contained at 6 pm, but part of it grew the next morning, Thursday, prompting the Philippine Air Force to dispatch its rescue chopper in the Rapid Damage Assessment and Needs Analysis (RDANA).

On the path of the fire was the St Louis Philex annex in Ampucao.

Meanwhile, about 20 hectares of pine forest in Sagada, Mountain Province, was hit by pocket fires.

Fire melted the water hoses leading to the central barangay of Dagdag, affecting a number of inns and homestays in the popular tourist destination.

Fire Protection Officer Jet Gewan of the Bureau of Fire Protection said that among those affected by forest fires were Sitios Dalalag, Pakad, and Danonoy in Dagdag. These areas were hit by 4 fires. Gewan said that these were cases of suspected arson.

Fre also hit some 5 hectares of mountains in Sitio Langtiw above Sumaguing Cave, extending to sitio Kanip-aw. The cause of the fire is believed to be accidental.

In Sitio Gagab-an in Ambasing, some 200 square meters of pine land were also burned due to children playing with fire as some people in the vicinity claimed.

In Barangay Antadao, some 300 square meters of pine land were razed to the ground due to unattended kaingin (slash-and-burn farming), Gewan said, though another mountain below the high school building was burned.

In the Mount Pulag area in Benguet, the Provincial and Environment and Natural Resources Office in Benguet is still investigating a recent fire which damaged 4 hectares in the area.

The fire reportedly hit the rare mossy forest area and the fire could have been intentionally started.

Personnel from the park together with the Department of Environment and Natural Resources, National Power Corporation, Bureau of Fire Protection (BFP), local government unit, and residents suppressed the fire.

Akiki Trail was closed as a precaution.

At the start of February, a portion of Mount Yangbew in La Trinidad, another popular tourist spot, was razed. Two hectares of Yangbew were partially burnt.

Back in Baguio, the fire department reported a significant increase in the number of fire incidents in the city for the first part of the year with 26 fire incidents already compared to 10 during the same period last year.

Senior Fire Officer 2 Camilo Balancia, Baguio fire department public information officer, said that of the 26 fire incidents that were recorded this year, 21 were bushfires, two were structural, and one was a dumpster fire.

In 2017, the Baguio fire department registered a total of 75 fire incidents that resulted in over P11.9 million worth of damage to properties. Fifty fire incidents were said to be structural fires.

In 2018, Balancia claimed there were 79 fire incidents that caused over P22.6 million worth of damages to properties, with a single fatality. Forty-one were said to be structural or forest fires while 20 were bushfires.

The Baguio fire department has the manpower of 73 personnel with 11 fire trucks, although 3 of the said trucks are due for repair. Six of the fire trucks are courtesy of the local government while the 5 trucks were procured by the BFP.

For 2019, the local government will again procure another fire truck for the Baguio fire department.

Aside from the central fire station, the Baguio fire department also administers the operation of 3 fire substations that were constructed by the local government in Irisan, Aurora Hill, and the newly- opened fire substation in Quirino Hill.

The local government is eyeing the construction of additional fire substations in the Pacdal, Loakan, and Crystal Cave areas to boost the timely response of firefighters to reported fire incidents within their areas of jurisdiction. – Rappler.com