Groups urge unity vs tyranny ahead of People Power anniversary

Feb 23, 2019 4:22 PM PHT
Lian Buan
Facebook Twitter Copy URL
Copied
(UPDATED) ‘We cannot allow the next generation of Filipinos to live in fear and violence. We stand against the Duterte government,’ says the Philippine Alliance of Human Rights Advocates 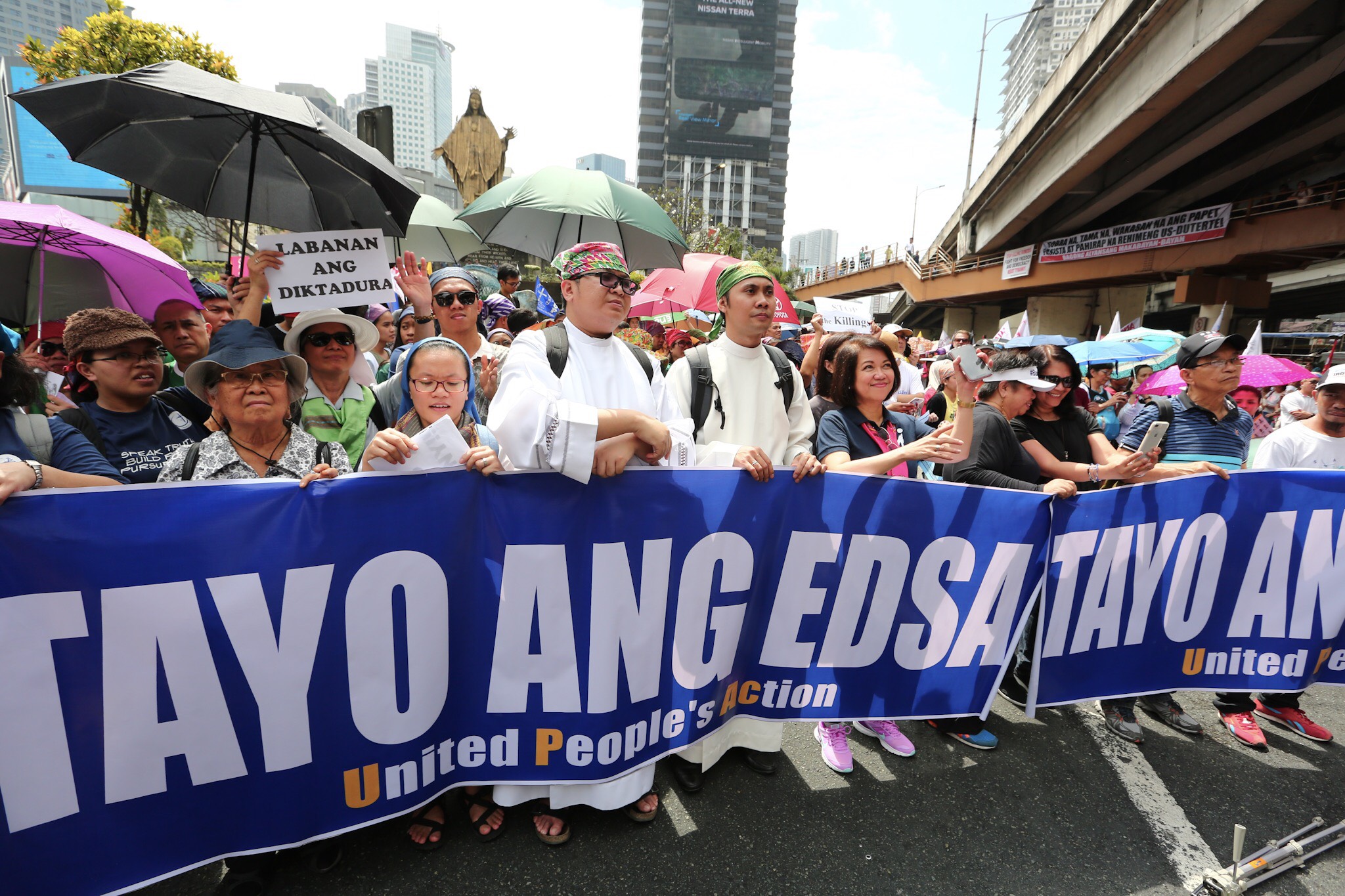 MANILA, Philippines (UPDATED) – Multisectoral groups on Saturday, February 23, trooped to major thoroughfare EDSA to mark the 33rd anniversary of the People Power Revolution where they called for a united fight against a return to authoritarian rule and against the prevailing culture of impunity in the country.

“The lesson we draw from EDSA 1986 is a demarcation line between the rival faction of the ruling elite and with the toiling and impoverished masses even as we march side-by-side with them in the struggle against wanna-be dictator Rodrigo Duterte,” said Partido Lakas ng Masa (PLM) chair Sonny Melencio who joined the event.

“By doing so, we are not sowing disunity among the ranks of the anti-Duterte forces but are forging the unity of the people to struggle for genuine social change, not just a change in the regime,” he added.

The Philippine Alliance of Human Rights Advocates (PAHRA) said in a statement on Saturday that the “promise of EDSA never materialized,” because “human rights are blatantly violated and those who defend them are vilified, attacked and labeled ‘enemies of the State’ by the current government.”

“We cannot allow the restoration of authoritarian rule and a culture of impunity to prevail in society. We cannot allow the next generation of Filipinos to live in fear and violence. We stand against the Duterte government.  We, the people, have to reclaim and defend our power.  Let us unite and act to defend our rights and dignity,” PAHRA said.

The EDSA Revolution is a globally-lauded bloodless movement that overthrew strongman Ferdinand Marcos and restored democracy to the Philippines.

Women’s party list Gabriela said the EDSA Revolution is celebrated not only to remember the ouster of the Marcos regime, but to remind the current administration of the power of the masses.

“Walang diktador na nakakapagtagal nang habambuhay. Anumang higpit ng kapit niya sa kapangyarihan ay tiyak ang pagkagapi niya laban sa lakas ng mamamayan. (No dictator can be in power forever. No matter how tight his grip on power is, he would surely be defeated by the might of the people),” the women’s party list said.

Gabriela added that the way economic managers of the Duterte administration run the government is no different from the Marcos era.

“This is likewise evident in Duterte’s approval in burying the former dictator at the Libingan ng mga Bayani and in Sara Duterte’s campaign for Hugpong ng Pagbabago which consolidated the loathsome Marcos-Duterte alliance with the rest of the dirtiest and most corrupt personalities in Philippine politics,” Migrante said in a statement on Saturday.

PAHRA also said that People Power us “about unsung heroes of yesterday who vigilantly fought for the nation to be free” and not about those who were associated with the movement such as the Aquinos and their supporters, collectively called “Yellows” after the potitical color of the Aquino family and the Liberal Party.

“Lest we forget that there were ordinary people – farmers, workers, fisherfolks, teachers, students, church people, and even professionals who offered their lives in the altar of struggle and resistance for nationalism and democracy,” said PAHRA.

The Otso Diretso opposition senatorial slate would also be at that event. – Rappler.com