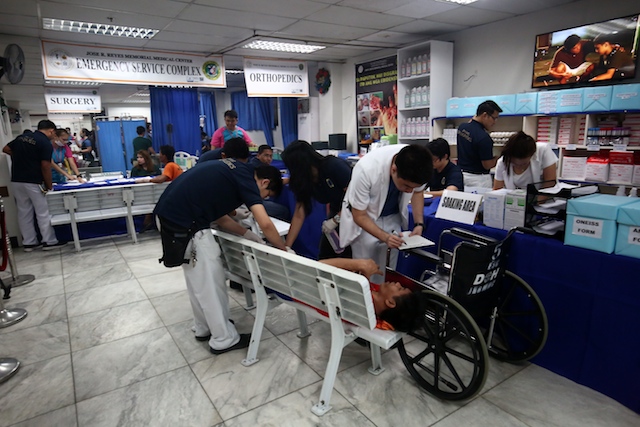 MANILA, Philippines – Solicitor General Jose Calida blocked a petition before the Supreme Court seeking to implement an increase in the salary grade of government nurses, saying it lacked legal basis and would result in inequity among government workers’ wages.

Calida defended during oral arguments before the High Court on Tuesday, February 26, the government’s position on the bid to increase government nurses’ salaries to as much as P31,000 a month.

Party list Ang Nars filed a petition in 2015, seeking to declare unconstitutional an Executive Order (EO) that former president Gloria Macapagal Arroyo signed in 2009. That EO downgraded the nurses’ salary grade from 10 to 11.

In 2002, the Nurses’ Act was enacted, setting the salary grade at 15, but a joint resolution of Congress became Arroyo’s basis for signing her order. Under the current tranche of salary grades, salary grade 15 equates to as much as P31,545 a month.

The main argument that the SC tackled was whether the joint resolution could repeal the Philippine Nursing Act of 2002 or Republic Act (RA) 9173.

Arroyo’s EO No. 811 was based on a joint resolution by Congress that sought to modify the compensation scheme of some professions, including nurses.

Calida argued that the petition lacked legal basis because the petitioner lacked “substantial and personal interest” in the case. He said then-representative of Ang Nars, Leah Primitiva Samaco-Paquiz, was no longer an incumbent member of Congress, nor was she currently employed as a state nurse.

The Solicitor General likewise argued that the joint resolution, which served as basis for EO 811 was a law as it underwent the same process a bill had to undergo to be enacted into law.

Calida, however, argued that “in Philippine legislative milieu, as confirmed by both the Senate and House of Representatives, there is no real difference between a bill and joint resolution.”

The Solicitor General said that if government implemented section 32 of RA 9173, this would result in “wage distortion” among public workers. He cited as an example, the salary grade of entry level medical officers pegged at salary grade 14; and a pharmacist, optometrist, medical technician, and occupation therapist at salary grade 11.

“All of these allied medical professionals work under essentially the same conditions but would become differently situated in terms of salary if Section 32 of RA 9173 would be enforced,” Calida said.

Ang Nars’ petition was based on section 32 of RA 9173, which said nurses should be at salary grade 15.

Paquiz agued that government could raise the salary grade of all workers to ensure wages remained equitable – should the compensation for nurses also be raised. This, she said, was better than having state nurses’ pay “pulled down.”

Aside from these, Calida also said that having argued the joint resolution was considered a law, this gave the President power to modify the compensation classification of civil servants. He added that section 16 of the resolution also repealed the provisions of laws inconsistent with it.

Section 16 reads: “The provision of all laws, decrees, executive orders, corporate charters, rules, regulations, circulars, approvals and other issuances (…) inconsistent with the provisions of this Joint Resolution…are hereby amended.”

“The government recognizes the ever critical role of nurses in providing quality and accessible healthcare. However, the legislative intent to allow the executive branch to modify the framework of the compensation of civil servants to reduce inequity between government positions is clear and unequivocal,” Calida said.

The SC gave the government and Ang Nars 20 days to file their respective memoranda. The High Court said this was non-extendible. – Rappler.com