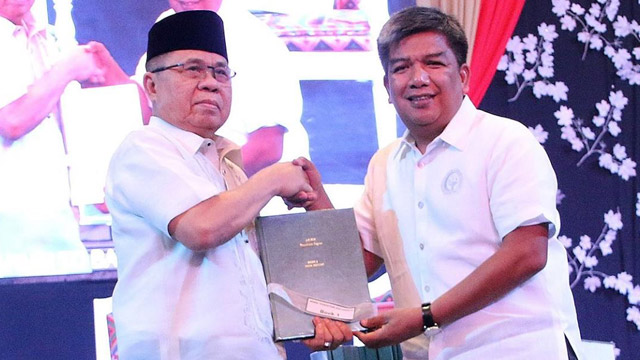 At the ceremonial turnover of the ARMM to the newly-created Bangsamoro Autonomous Region in Muslim Mindanao (BARMM) here, Hataman said he would be focusing on his home province of Basilan, where he is running as congressman.

(I am at a point where I want to focus on our communities in Basilan. It will be unfair to them, and to the BTA, if I will be forced to divide my attention.)

(My door and my telephone line will always be open to you. If there’s anything I can do to help, especially if it’s for the good of the Bangsamoro, I’m a phone call away, I’ll respond.)

During the ceremony, Hataman turned over ARMM transition documents to Murad. The documents were organized into 9 books, namely:

After the turnover ceremony, Murad and the BTA members had a tour of the ARMM’s Office of the Regional Governor, the seat of the new Bangsamoro government.

BTA members to vow on the Holy Qur’an

Murad announced that the 80 members of the BTA would take their oath on the Holy Qur’an, the Islamic sacred book.

He said this is to ensure that the BTA would run a government that is “free of all the ills of governance.”

The BTA initially appointed 10 of its Cabinet members who will head the BARMM ministries. They are:

“For now, we will be assuming the structure of the ARMM. We will only replace those what we call the coterminous with the regional governor. All those in the bureaucracy will still be intact,” Murad said.

The BTA, although still incomplete, was set to hold its first meeting on Wednesday, February 27. – Rappler.com