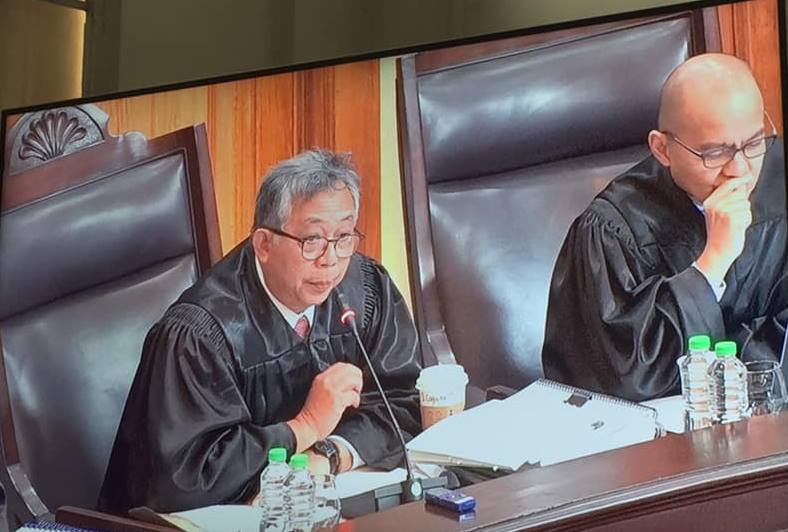 Leonen and Caguioa were the only two dissenters in the 11-2 en banc decision that validated the legality of Duterte’s Proclamation No. 475 that placed areas in Boracay under a state of calamity to prepare it for closure and rehabilitation.

The ruling  was penned by Associate Justice Mariano del Castillo, who said that “Proclamation No. 475 is a valid police power measure.”

“This ponencia, which prioritizes swiftness of action over the rule of law, leads to the realization of the very evil against which the Constitution had been crafted to guard against –tyranny, in its most dangerous form,” said Caguioa in his strongly-worded dissenting opinion.

Caguioa also has this to say of his colleagues’ decision: “To say that we believe in our Constitution, and yet discard it so easily because of expediency, is to champion hypocrisy to the detriment of our national soul.”

Leonen said in his dissent that “upholding the framework contained in Proclamation No. 475 invites a regime that is borderline authoritarian.”

The petition filed by Boracay workers said Duterte cannot invoke police power as it is the authority of the legislative branch and not the executive.

Del Castillo’s ponencia said that it will be “insignificant” to discuss whether Duterte used a power that belongs to the legislative. The ruling said the proclamation did not impair people’s right to travel and therefore did not alter “the relationship between the State and the people.”

“The proclamation is therefore not a law and conversely, the President did not usurp the law-making power of the legislature,” said the ruling.

Caguioa called this a “constitutional shortcut.”

“It finds absolutely no basis in law, and unduly permits the consequent impairment of the rights to travel and due process by executive fiat,” Caguioa said.

Leonen and Caguioa both pointed out that the disaster law empowered mainly local government actors in the declaration of a state of calamity.

“The President cannot take over what has been statutorily granted to local government units,” said Leonen.

Leonen noted further that Duterte’s proclamation lacked the justification of empowering the President to lift the state of calamity whenever he wants, and lacked the standard used for closing the island for 6 months.

The closure of the island in itself, the two justices said, lacked legal basis.

“There can be no serious doubt that the six-month closure of Boracay, as ordered by Proclamation 475, cannot be anchored on RA 10121. To conclude as such requires an Olympic leap in logic which is totally unwarranted,” said Caguioa.

The ponencia said that the workers have no legal standing to file the case, as they can always find livelihood outside the island.

Leonen said that ambulant vendors such as the petitioners cannot be asked to simply just find jobs elsewhere.

“Not all informal workers are mobile simply because not all of them have financial resources to move from one (1) place to another. Not all of them have multiple skills that would allow them the flexibility to be employed in another line of work immediately when their current consistent source of income stops,” said Leonen.

Leonen also said the majority justices should follow the wisdom of the Constitution, which “calls attention to sensitivity to social justice.”

Caguioa said Duterte’s allies in Congress could have initiated a bill to respond to Boracay’s problems, which the President could have prioritized.

That way, Congress could have passed an enabling law, said Caguioa.

The majority decision said that the right to travel was not impaired since it was only temporary and consequential.

Caguioa noted that the Constitution set high standards for when the government can impair the right to travel, such as “in the interest of national security, public safety or public health.”

Caguioa said that invoking one of those standards also has to be “on the basis of a law explicitly providing for the impairment.”

Without such law, there can be no impairment, said Caguioa, as he recalled the recent decision of the Supreme Court that declared unconstitutional former justice secretary’s Leila de Lima’s Watchlist Order against Gloria Arroyo, otherwise known as the Genuino case.

“The Court did not hesitate to protect the Constitution against the threat of executive overreach in Genuino. The refusal to do so now is nothing less than bewildering,” said Caguioa.

Leonen said: “Authoritarian solutions based on fear are ironically weak. We still are a constitutional order that will become stronger with a democracy participated in by enlightened citizens. Ours is not, and should never be, a legal order ruled by diktat.” – Rappler.com