Duterte signed their promotion on February 18. 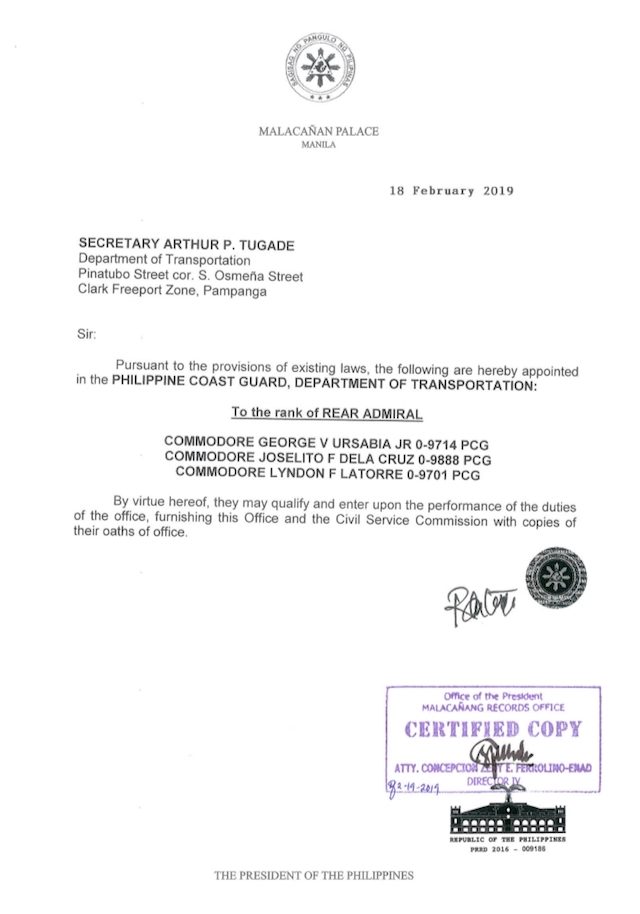 Back in March 2018, Duterte promoted two PCG officers who had been ordered suspended over the alleged misuse of P27 million in funds.

Ursabia is among the 25 PCG officers who were filed with administrative and graft charges in 2017 over alleged anomalous purchases worth P68 million.

The Office of the Ombudsman found the PCG officers guilty of serious dishonesty, grave misconduct, and conduct prejudicial to the best interest of public service.  The Court of Appeals, however, cleared Ursabia of administrative charges in 2018.

As for Dela Cruz, he was one of the 9 PCG officers then-Ombudsman Conchita Carpio Morales ordered suspended for 6 months back in April 2018, in relation to the alleged anomalous procurement of P27.06 million in office supplies.

The case is based on the findings of a Commission on Audit report that the officers obtained cash advances worth P27 million from 2013 to 2016 without complying with rules.

They then made purchases without public bidding, and documents they submitted as part of the liquidation were found to be “questionable,” with “spurious official receipts/sales invoices/cash invoices allegedly issued by suppliers.”

PCG spokesman Armand Balilo said Dela Cruz and Ursabia were reinstated to the positions they had before they were suspended. In the case of Dela Cruz, he had been allowed to return even before the end of the 6-month suspension period ordered by the Ombusman.

“The thing is, we were ordered by the court to reinstate them without loss of seniority, also their benefits. So we have to bring that back because it’s unfair to them. They are still presumed innocent,” he told Rappler on Thursday.

When asked, Balilo said he did not know the status of the criminal complaint against Ursabia before the Sandiganbayan.

Duterte promoted Ursabia and Dela Cruz despite his supposed non-tolerance for government officials on which he smells even “one whiff of corruption.”

“Huwag na huwag talaga akong makarinig na corruption, [not] even a whiff or whisper. I will fire you or place you somewhere,” he had said back in June 2016.

(I don’t want to hear of any corruption, not even a whiff or whisper. I will fire you or place you somewhere.)

Duterte has a record of reappointing officials even if investigating government agencies found them guilty of wrongdoing.

In March 2018, he promoted two PCG officers who had been ordered suspended by the Ombudsman for the same case of improper use of cash advances that got Dela Cruz suspended.

Former Customs chief Nicanor Faeldon was moved to the Office of Civil Defense and then eventually appointed Bureau of Corrections chief even if the Philippine Drug Enforcement Agency (PDEA) said he was involved in the P6.4-billion shabu smuggling controversy. The Ombudsman had even recommended the further investigation of Faeldon.

There’s also former Customs officials Milo Maestreocampo and Vincent Maronilla who faced similar accusations from the PDEA yet were reappointed by Duterte. Maestreocampo became assistant director general of the Civil Aviation Authority of the Philippines while Maronilla was appointed back into the Bureau of Customs. – With reports from Lian Buan/Rappler.com