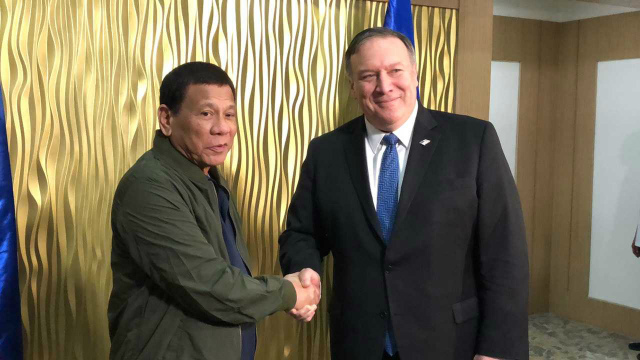 Pompeo and Duterte met at the Kalayaan Lounge of Villamor Air Base in Pasay City at around 9 pm.

In a statement, US State Department Deputy Spokesperson Robert Palladino said Pompeo and Duterte discussed counterterrorism and North Korea during their meeting.

“They reaffirmed the longstanding US-Philippines alliance, discussing ways to improve cooperation on regional security and counterterrorism. The Secretary and President Duterte also exchanged views on ongoing efforts to achieve the denuclearization of North Korea,” Palladino said.

Pompeo was accompanied by Palladino, US Ambassador to the Philippines Sung Kim, and Senior Bureau Official Patrick Murphy.

On Friday, March 1, Pompeo is also set to meet with Locsin at the Department of Foreign Affairs (DFA) in Pasay City. The DFA said the two parties will “discuss issues of mutual interest.”

Lorenzana had said he wanted to know if the Philippines should maintain, strengthen, or scrap the 1951 Mutual Defense Treaty between Manila and Washington. “Do we still have a cold war today? Is it still relevant to our security?”

The Philippines, a former US colony, is also increasingly flirting with regional giant China. Duterte himself vowed to move away from Washington and closer to nontraditional allies like Beijing and Moscow.

But on the ground, engagements by the Philippines showed it is not moving away from the US despite Duterte’s rhetoric. While the Philippines has China and Russia as its new buddies, the Philippines is sticking it out with its old military ally, the US. – with reports from Agence France-Presse/Rappler.com