What happens if the Philippines can’t pay off loans from China? 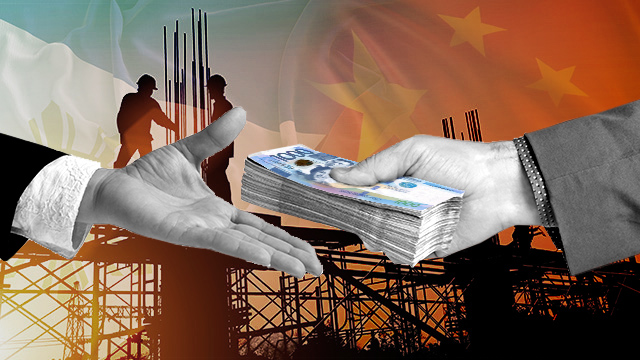 This was the concern of former Bayan Muna representative and senatorial candidate Neri Colmenares, zeroing in on the Chico River Pump Irrigation Project.

He raised the alarm over the “onerous” project requiring high interest rates and provisions seemingly waiving off the country’s sovereign immunity.

What is the project about? The Chico River Pump Irrigation Project is the first flagship infrastructure project financed by China under President Rodrigo Duterte’s “Build, Build, Build” program.

It aims to help some 4,000 farming families by irrigating around 8,700 hectares of agricultural land in Kalinga and Cagayan.

What are the loan terms? In a document obtained by Colmenares, the project has an interest rate of 2%, much higher than Japan’s rates of 0.25% to 0.75%.

The total project cost totals to P4.37 billion, while the loan agreement only covers P3.69 billion.

The agreement also slaps a “management fee” worth $186,260 and a “commitment fee” worth 0.3% per annum. According to the agreement, this will be “calculated on the undrawn and uncanceled balance of the Facility.”

This is to be paid “in full without counterclaim or retention.” (READ: [OPINION] What scares me the most about China’s new, ‘friendly’ loans)

Dangerous provisions? Colmenares was wary of the provisions that state that the Philippines’ sovereignty will not be recognized, which means that China may take control of the country’s patrimonial assets.

<blockquote class=”twitter-tweet” data-lang=”en”><p lang=”en” dir=”ltr”>A dangerous component of the Agreement is a vaguely worded provision that does not recognize our sovereign rights &amp; could allow China to take control of our patrimonial properties should we fail to pay the loan, much like what happened to Sri Lanka’s Hambatota Port.</p>&mdash; Neri Colmenares (@ColmenaresPH) <a href=”https://twitter.com/ColmenaresPH/status/1100651447685795841?ref_src=twsrc%5Etfw“>February 27, 2019</a></blockquote> <script async src=”https://platform.twitter.com/widgets.js” charset=”utf-8″></script>

The agreement makes mention of the Philippines having to waive off its right to immunity twice, namely in Articles 5 and 8.

By signing the deal, the Philippines under Article 5.5 is not “entitled to any right of immunity on the grounds of sovereign” in the case of arbitration and execution of any legal processes in relation to the project.

This is reiterated in Article 8.1, which stated that the country will also have to waive off “any immunity on the grounds of sovereign or otherwise for itself or its property in connection with any arbitration” that stems from unresolved disagreements related to the irrigation project.

However, the agreement stated that diplomatic, military, or non-commercial assets would still retain its immunity.

“The government cannot be sued so it’s immune from [being] sued. But this time, there’s no immunity so it’s dangerous. What if you can’t pay? What will they get?” Colmenares told Rappler in a phone interview.

The arbitration will only be pursued if a “friendly consultation” fails to solve any dispute, and will be dealt with following the rules of the China International Economic and Trade Arbitration Commission.

Colmenares told Rappler that the vaguely-worded sections in the agreement may mean that China is gunning to take control of the government’s commercial assets through government-owned and controlled corporations or even ports.

Given that arbitrations will be handled using Chinese laws and will be held in Beijing, Colmenares said that not only does he fear that China may twist the interpretation of the term “patrimonial assets,” but the Philippines will not even have a chance to win.

Should Filipinos worry? Finance Assistant Secretary Antonio Lambino hit back at Colmenares, saying that all loan agreements are not confidential.

He told Colmenares not to rely on leaked documents, as he can simply request them on the proper forum.

Lambino also explained that the interest rates from the Chinese loan were still cheap, despite Japan offering much lower figures.

(The rate of our loan is concessional. It means that it is still lower than accessing funds from the private market or from a multilateral development bank.)

(Comparing the nominal interest rates of loans from China and Japan does not give a clear picture. We need to look at the project cost foreign exchange rate, and other factors. We can see that both rates are similar and worth it.)

Lambino added that the Philippines has 20 years to pay for the loan and inclusive of a 7-year grace period.

In terms of the arbitration clause, Lambino explained that these have to be acceptable to both parties. However, he did not specify whether the Philippines has a chance of giving up land to China.

He assured Rappler that he will explain further the loan terms in detail for the public’s benefit.

“Our debt with Japan is 9.5%. Kayang-kaya nating bayaran ang mga utang na ito (we can easily pay up these debts),” he said.

He went on to explain that the country’s debt-to-GDP-ratio, or the ratio between loan obligations to the size of the economy, stood at 41.9% in 2018. Lambino said the programed ratio was 42.1%, which means the government performed better than intended.

He said any speculations regarding the debt trap was purely “hypothetical.” – Rappler.com