Mar 6, 2019 8:35 AM PHT
Marchel P. Espina
Facebook Twitter Copy URL
Copied
Two survivors say the driver was on his phone moments before their van swerved to the opposite lane and was slammed by a cargo truck 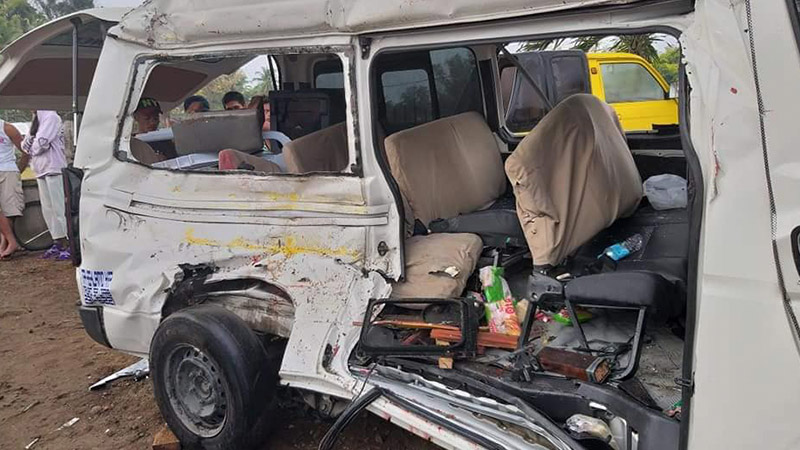 NEGROS ORIENTAL, Philippines – The driver of the rented van which figured in an accident on March 1 that killed 6 people, including 5 high school students, was talking on his cellphone moments before the crash at Barangay Mayabon in Zamboanguita town here.

Jaypee Sarad, 29, of Dauin town is facing charges for reckless imprudence resulting in multiple homicides and multiple physical injuries which was filed on March 2 before the Provincial Prosecutor’s Office in Dumaguete City. Nine other passengers were injured in that accident.

Zamboanguita Municipal Police Station case investigator Master Sergeant Janice Eluna said the two survivors claimed the driver answered his cellphone while he he was  overtaking the vehicle in front of their van.

“It was raining and the road was slippery,” she said, adding the driver lost control of the speeding vehicle, causing it to swerve and collide with the cargo truck on the opposite lane.

She said Sarad admitted to driving the van at a high speed.

He is in custody of the town police as the investigation is still ongoing.

The fatalities were identified as twin sisters Cherry Rose and Cherry Ann Kadusale, 17; Joshua Busmeon, 18; Kevin Aguilar, 14; and Christian Buenconsejo, 17. They were members of MathSayaw team of Basay National High School who just came from a tournament in Cebu City.

The other fatality was later identified as 20-year-old Nhemrose Gomez of Bindoy. She was a first year hospitality management student of Negros Oriental State University in Dumaguete City.

The collision also injured 9 other passengers including the classmates of the fatalities and their teacher.

Meanwhile, Education Secretary Leonor Briones, who visited the wake of the victims in Dumaguete City on March 2, mourned the death of the students.

She said it’s such a great loss. “We did not lose only the lives of children. We lost so much promise, so much ambition, and so much hope.” – Rappler.com