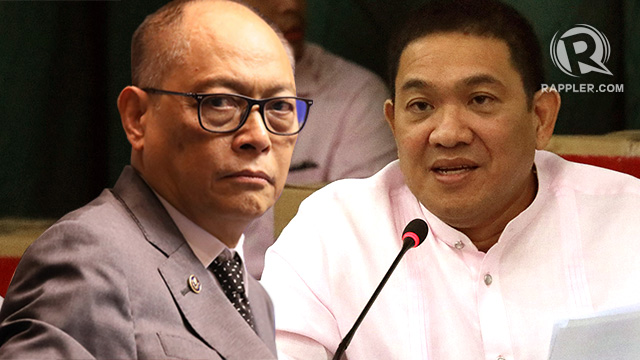 Now that Diokno has been appointed governor of the Bangko Sentral ng Pilipinas (BSP), Andaya has softened his words, telling reporters on Wednesday, March 6, that “now is not the time” to pursue charges against Diokno.

“I don’t think now is the time, babalik din naman ‘yan (it would come back),” Andaya said.

Andaya led congressional probes into Diokno’s alleged links to construction firms supposedly involved in the so-called flood control projects scam. Andaya’s term is ending and he is running for governor of Camarines Sur in the May elections.

Andaya did file one case against Diokno: he led a class suit with government employees before the Supreme Court over the non-release of the 4th tranche of their wage hike.

As BSP governor, Diokno will be supervising the Anti-Money Laundering Council (AMLC). Andaya had once sought AMLC assistance to investigate Diokno.

Asked if he will still pursue the AMLC route, Andaya said: “Ah, wala na ‘yun (not anymore)…Those issues we’ve raised siguro some other person, some other time.”

Andaya was not sure if they could still release a committee report on their findings.

“Hopefully kapag may oras pa but from my experience I think I’ve stated the fact that some other time, some other person, maybe in the next Congress, nandiyan naman na ‘yan eh, these things have a way of coming back,” Andaya said.

(Hopefully, if there’s still time but from my experience I think I’ve stated the fact that some other time, some other person, maybe in the next Congress, those things are already there, these things have a way of coming back.)

Asked if he would still hold another hearing, Andaya said: “Na-transfer na eh, okay na ‘yun eh, I think I personally learned so many lessons from that experience, some other time, some other person.”

(He’s been transfered, that’s okay, I think I personally learned so many lessons from that experience, some other time, some other person.) – Rappler.com