U.N. rights chief: PH’s ‘drug war’ not a model for any country 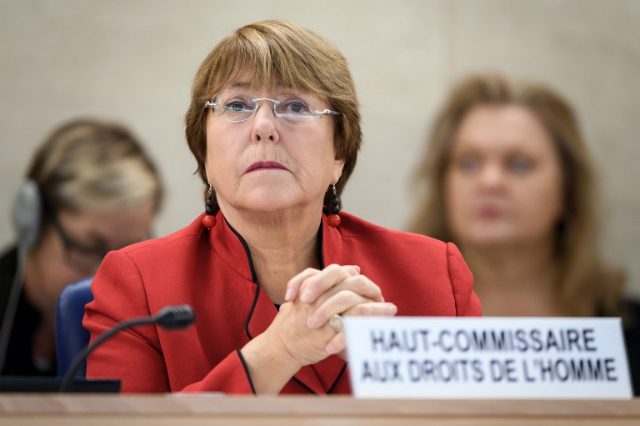 Facebook Twitter Copy URL
Copied
'The drug policies in place in the Philippines, and its lack of respect for rule of law and international standards, should not be considered a model by any country,' says Michelle Bachelet in a speech before the UN Human Rights Council

MANILA, Philippines – United Nations High Commissioner for Human Rights Michelle Bachelet on Wednesday, March 6, said that the violent anti-illegal drugs campaign of the Philippines should not be replicated by other countries.

“The drug policies in place in the Philippines, and its lack of respect for rule of law and international standards, should not be considered a model by any country,” she said in a statement delivered during the 40th session of the UN Human Rights Council in Geneva, Switzerland.

President Rodrigo Duterte’s campaign since 2016 has attracted criticism from local and international human rights groups for the rising number of killings. (READ: The Impunity Series)

More than 5,000 people have been killed in anti-drug police operations as of February 2019, while human rights groups estimate the number to reach more than 20,000 to include victims of vigilante killings.

Authorities have yet to catch up in prosecuting those responsible. Despite persistent requests, Solicitor General Jose Calida said the government stands firm that it will not publicly release documents on killings linked to the anti-drug campaign. (READ: Duterte gov’t allows ‘drug war’ deaths to go unsolved)

The UN rights chief called on the Philippine government to “adopt a public health approach, and harm reduction initiatives, that comply with human rights standards.”

“People who have fallen into the trap of drug reliance need help to rebuild their lives; drug policies should not be more of a threat to their lives than the drugs they are abusing,” Bachelet said.

Duterte, however, has repeatedly said that there is no use in saving addicts, calling them “lost souls.” (READ: Drug addiction is a health problem. Somebody please tell the President.)

Bachelet also highlighted the threats against human rights advocates, opposition politicians, and the media in the Philippines.