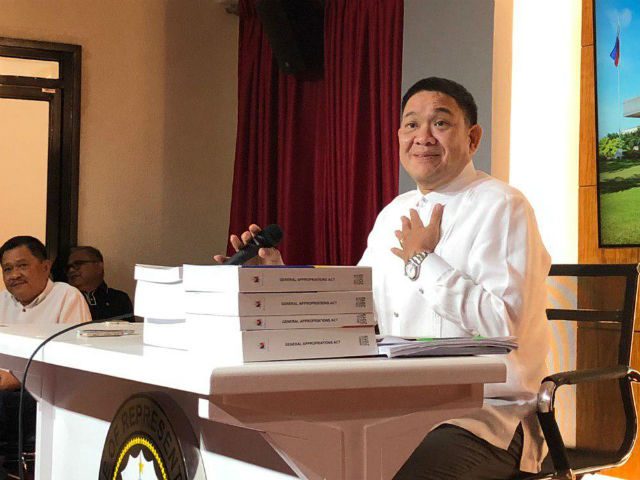 Facebook Twitter Copy URL
Copied
House committee on appropriations chair Rolando Andaya says if there are anomalous allocations under the 2019 budget as alleged by senators, President Rodrigo Duterte can always veto it

Sotto also said on Monday that he will not sign the 2019 budget if the contents prove to be different from the one Congress had ratified on February.

“Well, I’m hopeful na maybe they’ll have a change of heart. After all, if you look at it from the point of view of numbers, magkano ba ang pinag-uusapan natin dito (how much are we talking about here)? P70 billion, P80 billion? Our whole budget is P3 trillion. You’re talking about 3% of the whole budget, iho-hostage mo ‘yong 97%? (then you will hold hostage the 97%?)” asked Andaya.

Senator Panfilo Lacson earlier criticized the House for itemizing the proposed P4.5 billion budget for health facilities after the ratification of bicam report. But Andaya said senators also did the same for parts of the 2019 budget.

Andaya said senators’ continued questioning of the 2019 budget would only further delay the passage of the national budget aimed to benefit several sectors.

(We’re not just talking about one fund here! We’re talking about the police force, upgrading our hospitals, scholarships, and agriculture, especially now that there is a looming drought. All of this will be held hostage for 3% of the budget?)

The government is still operating on a reenacted budget from 2018 after Congress failed to pass this year’s budget before December 31, 2018.

Andaya then said that if senators will still maintain there are alleged anomalies committed by the House, then President Rodrigo Duterte can always veto the budget allocation in question when he signs the 2019 General Appropriations Act (GAA).

(If there’s something wrong, then the President can veto it. Whatever amount it may be, he can veto it! Why sacrifice the whole budget for a small amount?)

He argued itemizing parts of the budget after ratification of the bicam report does not violate the Supreme Court (SC) ruling that deemed as unconstitutional the Priority Development Assistance Fund.

Andaya said the SC decision covers only the post-enactment stage of the budget process, which does not apply in this case since the 2019 GAA has not been signed yet. – Rappler.com