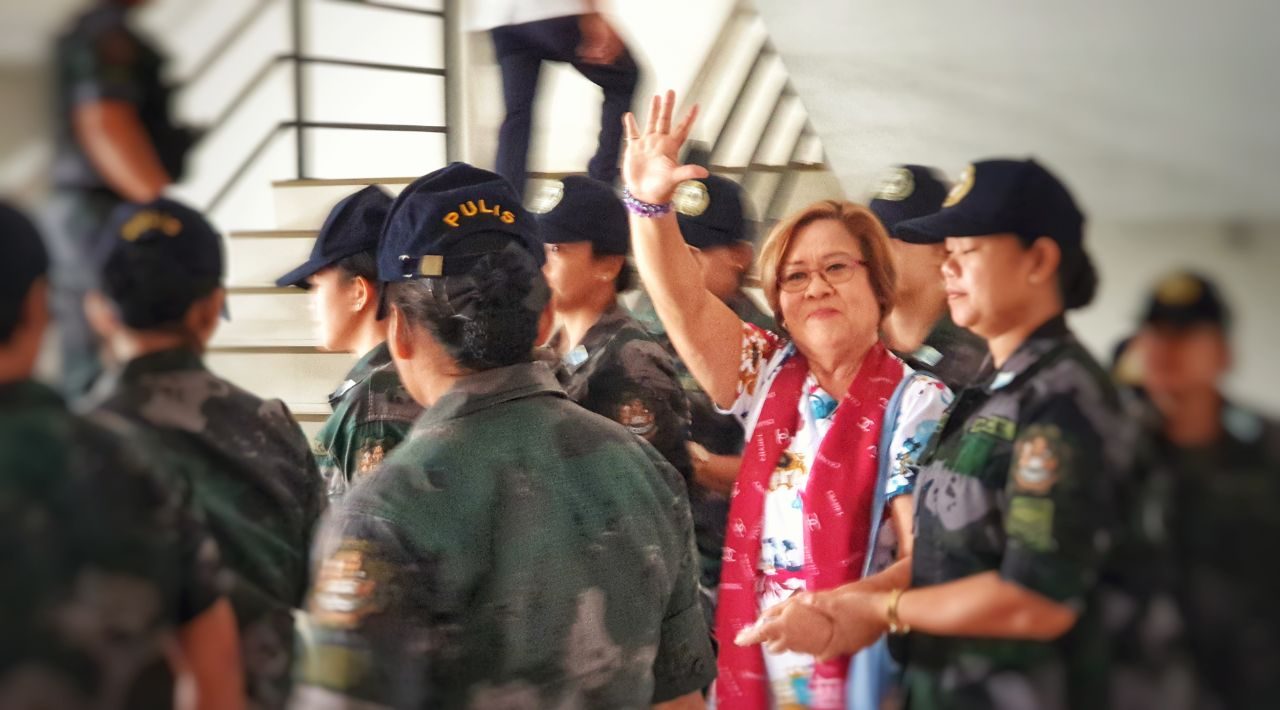 MANILA, Philippines (UPDATED) – After two years of reset hearings, the trial of opposition Senator Leila de Lima started to heat up on Friday, March 15, as the Department of Justice (DOJ) brought to court its witnesses against the embattled lawmaker.

On the objections of the defense, Ablen said he believed the money was sourced from an illegal activity.

Ablen said that on November 24, he saw De Lima welcome Ragos and Ronnie Dayan at her door, while he only saw Ragos and Dayan at the same door on December 15.

This is the first witness in court to directly link De Lima to the drug trade in the New Bilibid Prison.

“Lies!” was all De Lima could say when media tried to interview her after the hearing, as police escorts tried to block her from answering questions. (READ: De Lima wants court to charge Bilibid convicts in drug cases)

In a statement on Saturday, March 16, De Lima gave a lengthier response, as she dismissed the allegations of Ablen as “pure fiction.”

“These never happened. Ablen is just another perjured prosecution witness in these fabricated cases,” she said in a dispatch from her jail cell in Camp Crame.

“The ongoing trial is but an encore of the carnival of lies that former SOJ Aguirre and his band of operators had managed to assemble, upon Duterte’s orders,” De Lima added.

She said she issued the statement against the advice of her counsel, “lest lies persist.”

Ablen had to approach Dayan inside the court to identify who he was accusing. When he went near Dayan, he said, “Magsama tayo sa impyerno (Let’s join each other in hell).”

After the hearing, Dayan said Ablen was lying.

De Lima’s defense lawyers were not able to cross-examine Ablen because he wasn’t on schedule to testify. The witness scheduled that day couldn’t come due to a family emergency.

So as not to waste the setting of the hearing, Judge Liezel Acquiatan allowed the DOJ to present Ablen for the day. The defense can prepare for and conduct its cross examination next Friday, March 22.

De Lima’s lawyer Boni Tacardon did not answer media questions on what their defense will be so as not to preempt their cross examination.

(Ablen, for one reason or another, testified against Senator De Lima maybe in exchange for certain privileges because both Ronnie Dayan and Senator De Lima are saying that this supposed delivery never happened.)

At the House of Representatives hearing in 2016, Ablen testified that Ragos delivered P5 million on each of the two occasions, totalling P10 million. The first cash delivery was inside a black bag, while the other was wrapped in paper placed inside a plastic bag.

On the witness stand on Friday, Ablen said he did not see the content of the plastic bag on the second delivery, but sensed it was money. He also didn’t see De Lima on that day.

“You have to understand we’re talking about memory here. Sometimes when you review what actually happened, mare-recall mo (you can recall it) much clearly,” said DOJ prosecutor Darwin Cañete.

Ablen said he was left in the car parked across De Lima’s house on the two occasions but that he was able to see as far as the door when Dayan supposedly took the bags.

Ablen said he saw De Lima on the November 24 transaction, which was when Ragos supposedy brought over a black bag containing bundles of P1,000 bills totalling P5 million.

“I noticed the black bag was being carried by Dayan, he is trying to hand over the black bag to De Lima. I waited 30 minutes and then I saw Ragos went out with Dayan,” Ablen said.

Ragos was initially charged alongside De Lima, but the DOJ had dropped the charges against him to turn him state witness.

Asked whether they have the money trail of where the cash was deposited, such as bank accounts, Cañete said: “Hindi pa material ang accounts at this point (The accounts are not material at this point). What has been testified to was the cash or what is believed to be cash to the house, so we’re talking about that for now. Other evidence will be revealed in time.”

De Lima has been in jail for two years. – Rappler.com