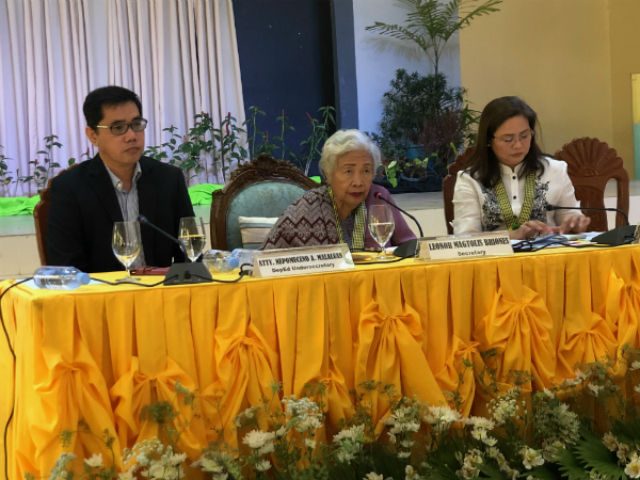 MANILA, Philippines – As members of Congress continued to lock horns over the 2019 national budget, Education Secretary Leonor Briones reminded the public that government agencies and employees were struggling to operate under a reenacted 2018 budget.

In a press conference Monday, March 18, Briones said that while debates between the House of Representatives and the Senate over the budget have been “fascinating,” consequences of a delayed budget have been felt from overstretched resources to a lower expected gross domestic product (GDP).

“In this so called battle of the budget…we have both houses still debating and conversing with each other and it’s all so fascinating, all the speculations [being made]. But perhaps it’s time to shift to those who are deprived, who are suffering, and the impact…on the economy,” Briones said.

As education secretary, it is not surprising for Briones to make such a statement. The Department of Education (DepEd) is one of the largest agencies of the government, with some 800,000 personnel employed under its various departments, schools, and programs.

“The Department of Education, like it or not, is the largest agency of the government. We suffer the most,” Briones said.

For instance, DepEd Undersecretary Annalyn Sevilla said the department did not have funds allocated for the hiring of some 80,000 new teachers needed in 2019.

The government is on its third month operating on a reenacted budget after Congress failed to pass the 2019 spending bill by December 31, 2018. No less than President Rodrigo Duterte met with lawmakers in a bid to break the budget impasse, but the talks led nowhere.

Now, a new tug-of-war has ensued between the Senate and the House of Representatives over adjustments made post-bicameral conference committee. (READ: Can the budget be adjusted post-bicam? What Supreme Court says)

“Perhaps it would be appropriate if we shift our attention to those who suffer from the consequences of this prolonged debate…. The economy is hanging, you have 800,000 teachers affected, you have children, learners affected, operations of various agencies of government affected,” Briones said.

The Department of Budget and Management already reiterated its appeal to lawmakers to settle their differences on the 2019 budget “as soon as possible.”

Meanwhile, economic managers have lowered their outlook for the economy, setting the country’s target GDP growth between 6% to 7%. The original target was 7% to 8% for 2019.