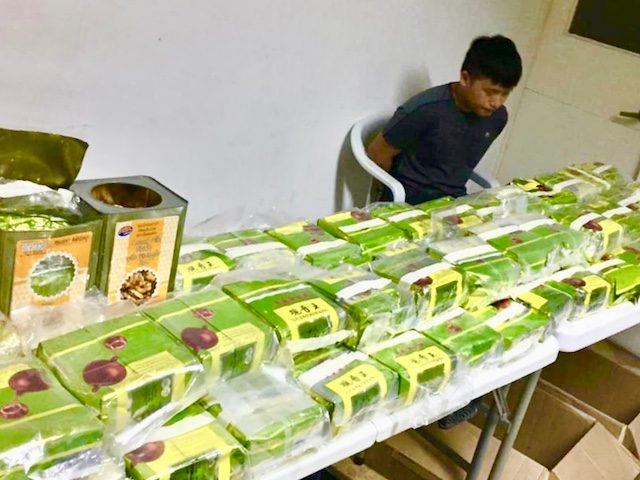 The illegal drugs were seized at the Alabang Town Center parking lot along Madrigal Avenue and inside a house in posh Ayala Alabang Village in Muntinlupa City.

At around 5:30 pm on Tuesday, PDEA and police operatives conducted a buy-bust operation at the parking lot, which led to the arrest of 3 Chinese suspects, and the seizure of shabu weighing 43.5 kilograms worth P295 million.

About an hour and a half later, PDEA operatives led another buy-bust operation a few kilometers away. Inside a house in the exclusive Ayala Alabang Village, the law enforcers arrested a 19-year-old Chinese drug suspect and seized 123 kg of shabu worth P836 million.

“The total seizure for these two operations is 166 kilos worth P1.13 billion,” PDEA chief Aaron Aquino said, explaining that the substances already tested positive for shabu.

PDEA earlier cited the Festival Mal parking lot as the site of the first buy-bust, but later corrected this to the Alabang Town Center parking lot in a clarificatory statement sent to media on Friday, March 22.

“Due to the excitement over the two successive high impact operations, the operatives mistakenly mentioned that the buy-bust venue was Festival Mall parking lot because of the mall’s popularity and name recall. We earnestly hope that this serves to rectify the honest mistake,” PDEA said.

Where did the drugs come from? PDEA’s Aquino suspects that the seized shabu came from the Golden Triangle Syndicate – one of the biggest drug groups in the world.

The giveaway, Aquino said, was the packaging of the illegal drugs. The shabu was stuffed inside tins of Chinese biscuits, which have also been used as packaging for drugs in other Southeast Asian countries.

The house, PDEA found, was empty of furniture, save for the shabu containers and a space set up as a small store at the house’s rear. Aquino said the home was owned by a certain Josephine Go, who was not inside the house when it was raided.

This led the PDEA to believe that the house was being used only as a storage facility for drugs.

“The house is actually used to storing drugs. This is not being used for living or sleeping. We found a small store, but it is not permitted [inside the subdivision]…. You’d think that [things] were being sold, but they’re actually shabu,” Aquino said. What happens next? The PDEA is investigating the links between the two operations aside from them involving Chinese suspects. They are also probing how the drugs were smuggled into the country.

Aquino said the shabu appeared to have been ready for delivery to Metro Manila and its surrounding regions: Calabarzon and Central Luzon.

The seizure in Ayala Alabang marks one of the biggest inside an upscale community in the history of the Duterte government’s anti-illegal drugs campaign. Cops have been struggling to look inside the subdivisions because of its tight security and regulations.

Aquino said the twin operations were based on tipsters of the PDEA National Capital Region.

“The PDEA is now more focused on high-end subdivisions, clubs, hotels, warehouses. That is our focus now,” Aquino said in a mix of English and Filipino. – Rappler.com

Editor’s Note: The PDEA earlier erroneously said that the first buy-bust occurred in the parking lot of Festival Mall. PDEA issued a correction that is reflected in this updated version.