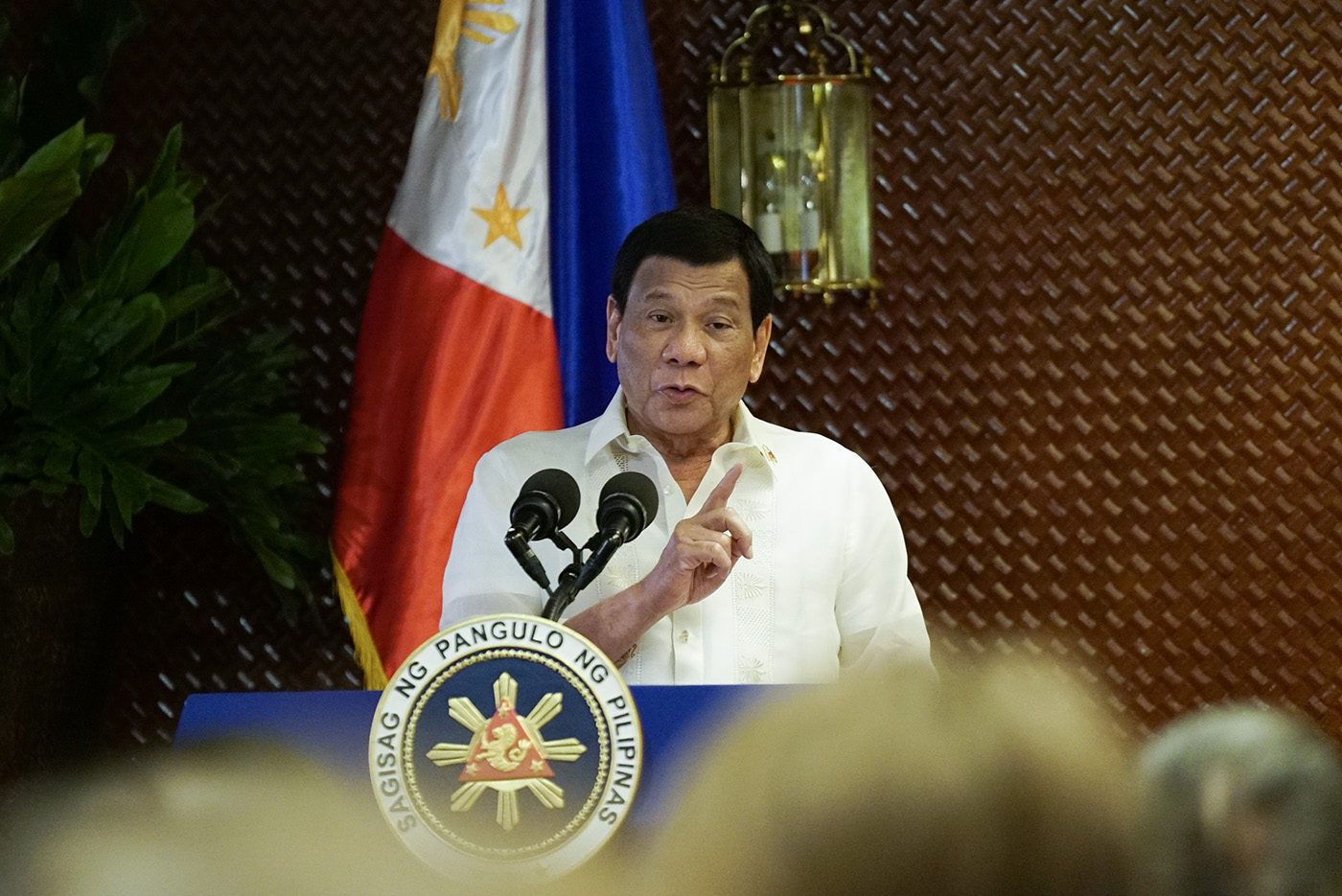 MANILA, Philippines (UPDATED) – President Rodrigo Duterte threatened to scrap the concession agreements of water concessionaires Manila Water and Maynilad during his meeting with their officials on Tuesday night, March 19.

Duterte also warned Metropolitan Waterworks and Sewerage System (MWSS) officials that they would get fired if he was not satisfied with their actions to address the water shortage.

“In a stern message delivered without even once looking at the officials, the obviously outraged President threatened to fire the MWSS officials and terminate the concessionaires’ contracts,” said Presidential Spokesman Salvador Panelo on Wednesday. Panelo was present at the meeting, held in Malacañang.

The President ordered the officials to submit a report by April 7, after which he would decide whether to make good on his threat to cancel the Manila Water and Maynilad contracts and fire MWSS executives.

Manila Water and Maynilad have concession agreements with the government in which the government grants them exclusive rights to operate and maintain water utilities in specific areas in a given period of time.

MWSS administrator Reynaldo Velasco said he is not sure about the legalities of terminating the concession agreements.

In a press conference the morning after the Palace meeting, he defended the concessionaires, saying they’ve done much to improve water access for Metro Manila and Rizal residents.

“They invested at a time when nobody wanted to invest in water utilities…From what we gathered, there is a concession because nobody wanted to do it before so there had to be an incentive so investors can come in,” he said in Filipino.

The concession agreement lays down ways for Manila Water and Maynilad to recover their investment, which they had made to help the government bring critical services to the people.

The meeting, according to Panelo, was mostly a “presidential monologue” in which a fuming Duterte blamed Manila Water, Maynilad, and MWSS for “not anticipating” the water shortage.

“The Chief Executive told them he was not going to listen to their explanation as to why there was a water shortage as such would be just plain excuses. They simply did not do their job. ‘All they care about is get profit from the water of the people’ and to their sufferance as well. The President told them they could have simply anticipated such shortage and could have done something about it,” said Panelo.

“He said the officials knew of the problem leading to the stoppage of the flow of water but they did not resolve to prevent it from happening,” added the spokesman.

Velasco bore Duterte no ill will, saying he understands the President’s anger. He said he had been ready to resign at Duterte’s say-so. But for Velasco, the meeting was the Chief Executive’s way of giving them a chance.

“While we were in the wrong, we moved fast so he would not get too angry at us… A father will always scold somebody who did not do his homework very well. But a good child will always correct the mistake that he made,” said Velasco.

Last Friday, March 15, Duterte had ordered the MWSS to tell Manila Water and the other concessionaire, Maynilad Water Services, to release water from the Angat Dam good for 150 days or else face his ire.

Velasco had reacted to the order, saying it seems Duterte was given the wrong advice. The presidential order, he said, was impossible to implement since it requires the release of 600,000 million liters per day (the equivalent of 150-day water supply), which cannot be done with the current infrastructure.

The ongoing supply shortage was caused by the La Mesa Dam drying up and water being unable to reach the aqueduct gates. (READ: Manila Water’s supply crisis: What we know so far)

In a House hearing conducted on Monday, March 18, Manila Water chief executive officer Ferdinand dela Cruz said they have restored water supply to 80% of the East Zone, or around one million customers.

The concessionaire also gave assurances that its services will return to normal by the last week of May. (READ: Lawmakers call for refund after Manila Water shortage) – Rappler.com