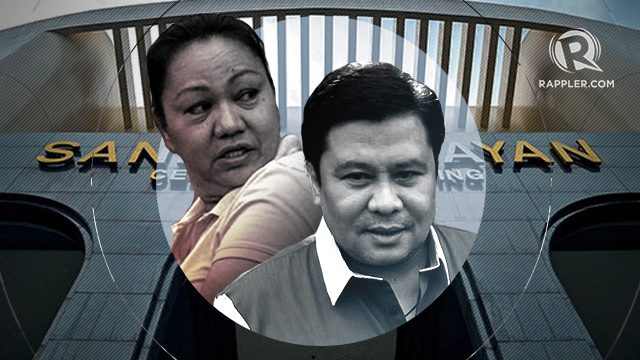 Facebook Twitter Copy URL
Copied
(UPDATED) Both defendants have 10 days to file their demurrers to evidence that, if granted, will get them acquitted of plunder

The Sandiganbayan’s 5th Division granted the motions of Estrada and Napoles for leave to file a demurrer to evidence, clearing the way for a possible dismissal of the charges without having to present their own evidence.

Estrada and Napoles will now have to file a pleading called a demurrer, a pleading so serious it has to ideally be filed with clearance from the court.

If the leave is denied, one can proceed to file a demurrer but at great risk. Bong Revilla’s leave was denied twice, so he opted to present evidence.

If the demurrer itself is granted, Estrada and Napoles will be acquitted of plunder over the supposed P183-million pork barrel scam. If the demurrer is denied, the defendants would have to proceed to the presentation of evidence.

What the court said

The 5th Division did not tackle much in the 3-paged resolutions it issued separately for Estrada and Napoles on March 13, released to media only on Wednesday, March 20.

The court simply said for Estrada that: “After a meticulous examination of the totality of the evidence presented by the prosecution, both testimonial and documentary, the Court resolves to grant the present motion of the accused, to sufficiently provide him an opportunity to challenge the sufficiency of the prosecution’s evidence establishing the material elements of the offense charged to support a judgment of guilt.”

The court said basically the same for Napoles.

Lagos dissented in the bail grant given to Estrada in 2017. Arcega concurred in that decision, while Mañalac is a new member.

The court noted the opposition of Ombudsman prosecutors pointing out that Estrada’s ill-gotten wealth has already been established by the same division.

“It cited the Resolution of this Court dated January 17, 2016, wherein a mathematical computation of P55,795,000 representing accumulated wealth by Estrada in this scheme has been established, which was not disturbed by the Court when it allowed the accused to post bail,” the 5th Division said, quoting the prosecution.

The prosecution also reiterated its explosive Anti-Money Laundering Council (AMLC) report that shows, among others:

Estrada’s bail grant was based on the Supreme Court-introduced “main plunderer doctrine,” which says that there cannot be a crime of plunder if there is no main plunderer.

“Still the prosecution’s evidence show that accused Estrada is the main plunderer having sole and exclusive control over his Priority Development Assistance Fund (PDAF) allocation,” the prosecution said.

But in past pleadings, Estrada and Napoles have both invoked the main plunderer doctrine to defend themselves.

Estrada and Napoles have 10 days to file their demurrers after which the court will decide. – Rappler.com