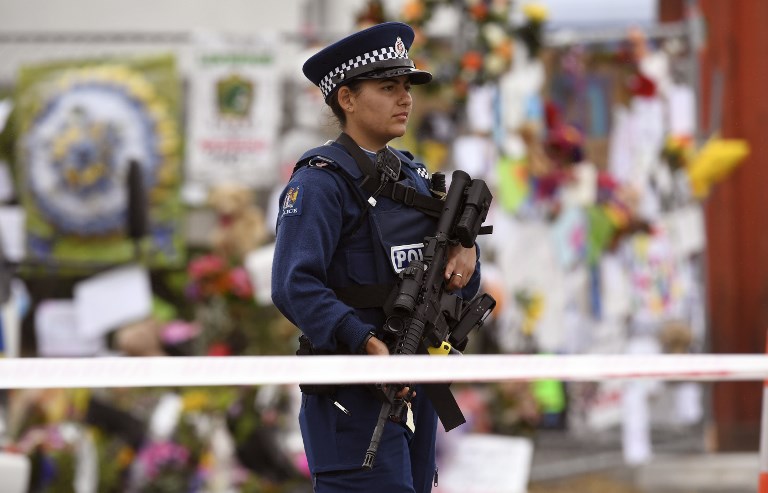 Prime Minister Jacinda Ardern said assault rifles and semi-automatic weapons were now banned with immediate effect, making good on a pledge to the country of the military-style weapons used in last week’s slaughter of 50 people.

But the crackdown promises to have political repercussions beyond the country’s shores, including in the United States where gun control is one of the most divisive national political issues.

“In short, every semi-automatic weapon used in the terrorist attack on Friday will be banned in this country,” Ardern said.

She added that high-capacity magazines and devices similar to bump stocks – which allow users to fire weapons faster – will also be banned.

Proponents of gun control in the United States and around the world praised the move and denounced the powerful US pro-gun lobby on social media, while American gun supporters defended their constitutional right to bear arms.

“This is what real action to stop gun violence looks like,” Democratic US Senator and presidential hopeful Bernie Sanders tweeted.

“We must follow New Zealand’s lead, take on the NRA (National Rifle Association) and ban the sale and distribution of assault weapons in the United States.”

High-profile Democratic Congresswoman Alexandria Ocasio-Cortez contrasted Ardern’s swift action with US failure to enact even modest controls following recurring horrific shootings such as at Sandy Hook Elementary School in Connecticut in 2012, in which 20 children and 6 school staff died.

“Sandy Hook happened 6 years ago and we can’t even get the Senate to hold a vote on universal background checks,” Ocasio-Cortez tweeted.

“Christchurch happened, and within days New Zealand acted to get weapons of war out of the consumer market. This is what leadership looks like.”

US President Donald Trump did not immediately react on his Twitter feed, but NRA spokeswoman Dana Loesch responded to Sanders by tweeting that “the US isn’t NZ.”

“While they do not have an inalienable right to bear arms and to self defense, we do,” she said.

Accused shooter Brenton Tarrant livestreamed the carnage in real-time, sparking worldwide revulsion and concern over access to guns and the use of social media by extremists.

Tarrant had written that he planned to use firearms for his attacks to encourage US gun control advocates to push for curbs, thus tearing open the bitter political debate.

“This attempted abolishment of rights by the left will result in a dramatic polarization of the people in the United States and eventually a fracturing of the US along cultural and racial lines,” he wrote.

New Zealand’s ban includes interim measures to prevent a run on such guns before legislation is enacted, and outlawing weapons already in private possession.

Guns are to be handed in and destroyed via a buyback scheme that will cost between Nz$100 million and $200 million (between US$69 million and $139 million), depending on how many are received and their valuations.

NZ Police Commissioner Michael Bush said there were around a quarter of a million firearms users in New Zealand, but he did not give a breakdown on how many possess semi-automatics.

Conservative estimates indicate some 1.5 million weapons are in circulation in New Zealand, equating to 3 guns for every 10 people, well below the US ratio of more than one weapon per person.

“The vast majority of New Zealanders will support this change. I feel incredibly confident of that,” Ardern said.

Simon Bridges, leader of the opposition National Party, embraced the ban and pledged to work with the government on it.

“The terrorist attack in Christchurch last week has changed us as a nation,” Bridges said.

“We agree that the public doesn’t need access to military-style semi-automatic weapons.”

Initial public reaction was positive in the still-shocked country, where hundreds of people turned out for a second day for somber funerals in Christchurch.

“It’s a good thing. Why would we need to have guns like this in our houses?” Kawthar Abulaban, 54, who survived the shootings, told AFP. – Rappler.com