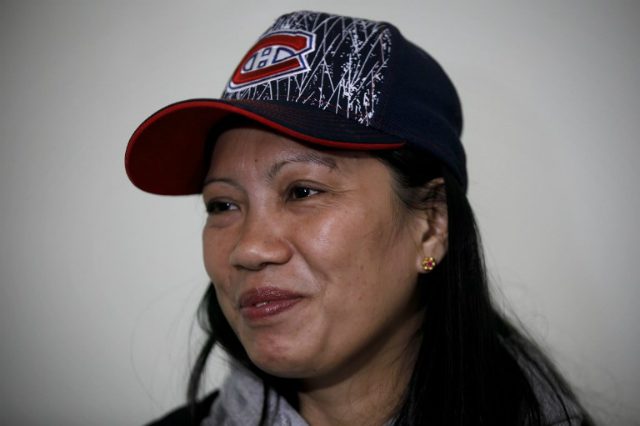 “Thank you, Canada, we owe you big time. Huge in fact – not just for her but for standing nearly alone on the planet as last rampart of decency, the rarest quality in the relations of nations,” Locsin said in a tweet responding to Rappler’s story about Rodel.

Thank you Canada, we owe you big time. Huge in fact—not just for her but for standing nearly alone on the planet as last rampart of decency, the rarest quality in the relations of nations. https://t.co/9vQJwb9Jig

Rodel and her 7-year-old daughter, Keana, arrived in Canada on Monday, March 25, as one of the first “Snowden refugees” to receive asylum status. The two will travel to Montreal on Tuesday, March 26, to settle there as private sector-sponsored refugees.

Rodel was among a group of people who sheltered Snowden, a former CIA employee and US National Security Agency (NSA) contractor, putting him up in her apartment in 2013 while he was in Hong Kong on the run from US authorities.

Snowden’s leaks of highly classified documents revealed the existence of global surveillance programs run by the NSA in cooperation with partners Australia, Britain, and Canada.

The Washington Post reported on Monday that Rodel “fled sexual violence in the Philippines in 2002 and sought asylum in Hong Kong.”

“After being kidnapped and trafficked by militants, Rodel fled the Philippines, landing in Hong Kong, a wealthy city with a poor record of protecting asylum seekers,” said the Washington Post.

Years later, in 2013, her Canadian lawyer Robert Tibbo “asked if she might shelter an American in distress – and that American turned out to be Snowden,” the Washington Post added.

Rodel is not the first Filipino to be sheltered by Canada.

In November 2017, Canada granted refugee status to expelled Iglesia ni Cristo member Lowell Menorca II, who was facing threats to his life in the Philippines. Months later, Canada gave the same status to Menorca’s 74-year-old mother for the same reasons.  – with reports from Agence France-Presse/Rappler.com