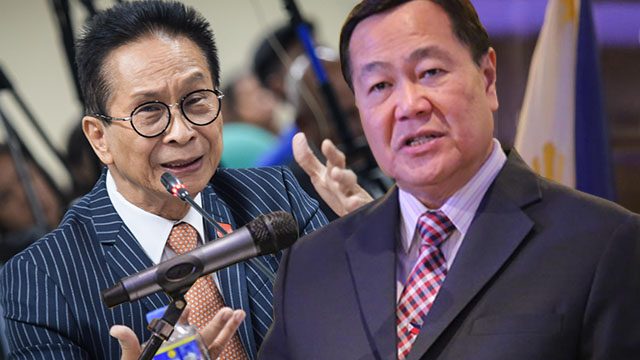 Carpio had earlier sounded the alarm on a clause in the P3.69-billion loan agreement from China for the Chico River pump irrigation project, which waives immunity to assets that include patrimonial properties.

Carpio said the gas-rich Reed Bank (Recto Bank) could end up being the collateral.

Lambino, who is not a lawyer but said he consulted the country’s “top” counsels, took it a step further and challenged Carpio using his own ponencia from 2002.

Lambino said that in the 2002 Amari Coastal Bay Development Corporation decision, Carpio himself used the Civil Code definition of a patrimonial asset. “How does his 2002 Supreme Court decision, that he penned, relate to this case?” Lambino said.

In response to this question, Carpio told Rappler on Wednesday morning: “Amari involved land, which is governed by specific provisions of the Constitution, which says ‘only agricultural lands of public domain can be alienated.’ Lands can be agricultural, residential, forest, and mineral. Oil and gas is just oil and gas.”

“The Amari case has a different subject matter,” he added.

“The Department of Energy already granted a service contract to Forum Energy to exploit the gas in Reed Bank pursuant to the Oil and Exploration Development Act of 1972, as amended,” Carpio said in an earlier statement.

Section 8 of that law says: “The (service) contract may authorize the Contractor to take and dispose of and market either domestically or for export all petroleum produced under the contract subject to supplying the domestic requirements of the Republic of the Philippines on a pro-rata basis.”

“This law proclaims the oil and gas covered by a service contract as subject to sale to the market – which makes such oil and gas patrimonial.  The power to reclassify from public domain to patrimonial is a legislative power.  The President’s power to so reclassify was merely delegated by Congress,” Carpio said.

In fact, the Amari decision that Lambino had cited itself said that the government can reclassify public property into a patrimonial asset.

While it’s true that Carpio cited the Civil Code definition of a patrimonial asset in the Amari decision, the second highest justice of the land wrote immediately after that part: “The government must formally declare that the property of public dominion is no longer needed for public use or public service, before the same could be classified as patrimonial property of the State.”

Will the Philippines default on the loan? Justice Secretary Menardo Guevarra on Tuesday night said that while he had yet to study the issue of what could be classified as a patrimonial asset, he believes that Carpio may be “jumping the gun.”

“We’re really just jumping the gun too well ahead of what may happen. We really don’t have much to worry about because of the loan because it’s just something like less than $100 million and relatively speaking, that’s just a small amount in terms of our total foreign debt,” Guevarra told reporters.

Carpio said that if all loan agreements from China will follow the Chico River template “then that will be a huge problem,” adding that total loans from China could be from $12 billion to $24 billion.

Guevarra echoed the Department of Finance (DOF) in saying that the Chico loan agreement was nothing out of the ordinary.

Reporters asked the justice secretary if he could name a past loan agreement that put up a patrimonial asset as collateral.

He  insisted that it was “far-fetched” that the Philippines will default on its Chico river loan, saying, “Kayang-kaya namang bayaran ‘yun (That can easily be paid).” – Rappler.com