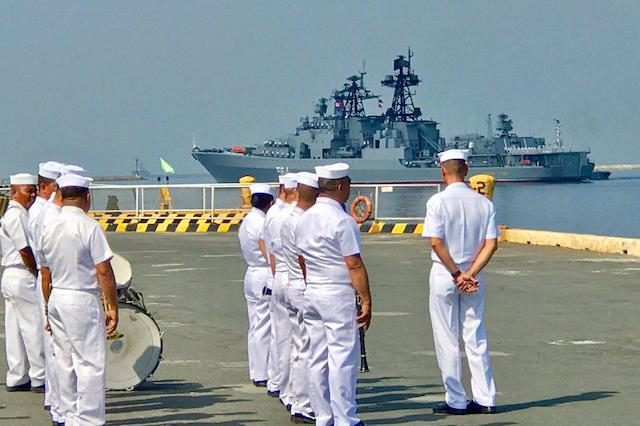 MANILA, Philippines (UPDATED) – Amid ongoing joint military exercises with its oldest ally, the United States, the Philippine military welcomed a new one: Russia.

On Monday, April 8, three Russian warships docked at the historic Port of Manila, kicking off a 5-day goodwill visit by the Russian Pacific Fleet.

“The arrival of our Russian Navy counterparts underscores the continuing efforts to further strengthen the relationship between our government and navies. This will further enhance and sustain the promotion of peace and stability and maritime cooperation,” said Philippine Navy Captain Constancio Reyes Jr.

The contingent comprised of the anti-submarine Admiral Tributs and Vinogradov and the large sea tanker Irkut. The head of the mission, Russian Navy Captain Sergey Alantiev, will pay a courtesy call on  Philippine Navy chief Vice Admiral Robert Empedrad.

This is the 2nd goodwill visit by the Russian Navy in 2019, after its January port call where Philippine President Rodrigo Duterte climbed aboard Admiral Tributs.

The welcome for the Russian Navy comes as the Philippine Armed Forces holds its annual Balikatan joint military exercises with the United States, which commenced on April 1 and will conclude on April 12.

The visit emphasizes the Philippines’ continued pursuit of an independent foreign policy under the Duterte administration, which also includes a pivot to Asian superpower China. This much was emphasized by Alantiev.

“Such port calls make tangible contribution to the peace and stability in the Asia Pacific region. We strongly believe that only by combining our resources and efforts can we cope with present-day threats and challenges,” Alantiev said.

Under President Rodrigo Duterte, the Philippines has signed military deals with Russia and also enjoyed donations in the form of military equipment.

Philippine Navy commanders also embarked on a first-of-its-kind visit to the Russian port city of Vladivostok in 2018.

In May 2017, the two countries signed a total of 10 deals, including a defense agreement that calls for more exchanges between their militaries, a deal to share intelligence as well as knowledge on the peaceful use of nuclear energy. – Rappler.com