Apr 9, 2019 8:13 AM PHT
Micole Gerard Tizon
Facebook Twitter Copy URL
Copied
After a fact-finding mission, rights groups question why the search warrant was issued by a court in another province when there are regional trial courts in Negros Oriental 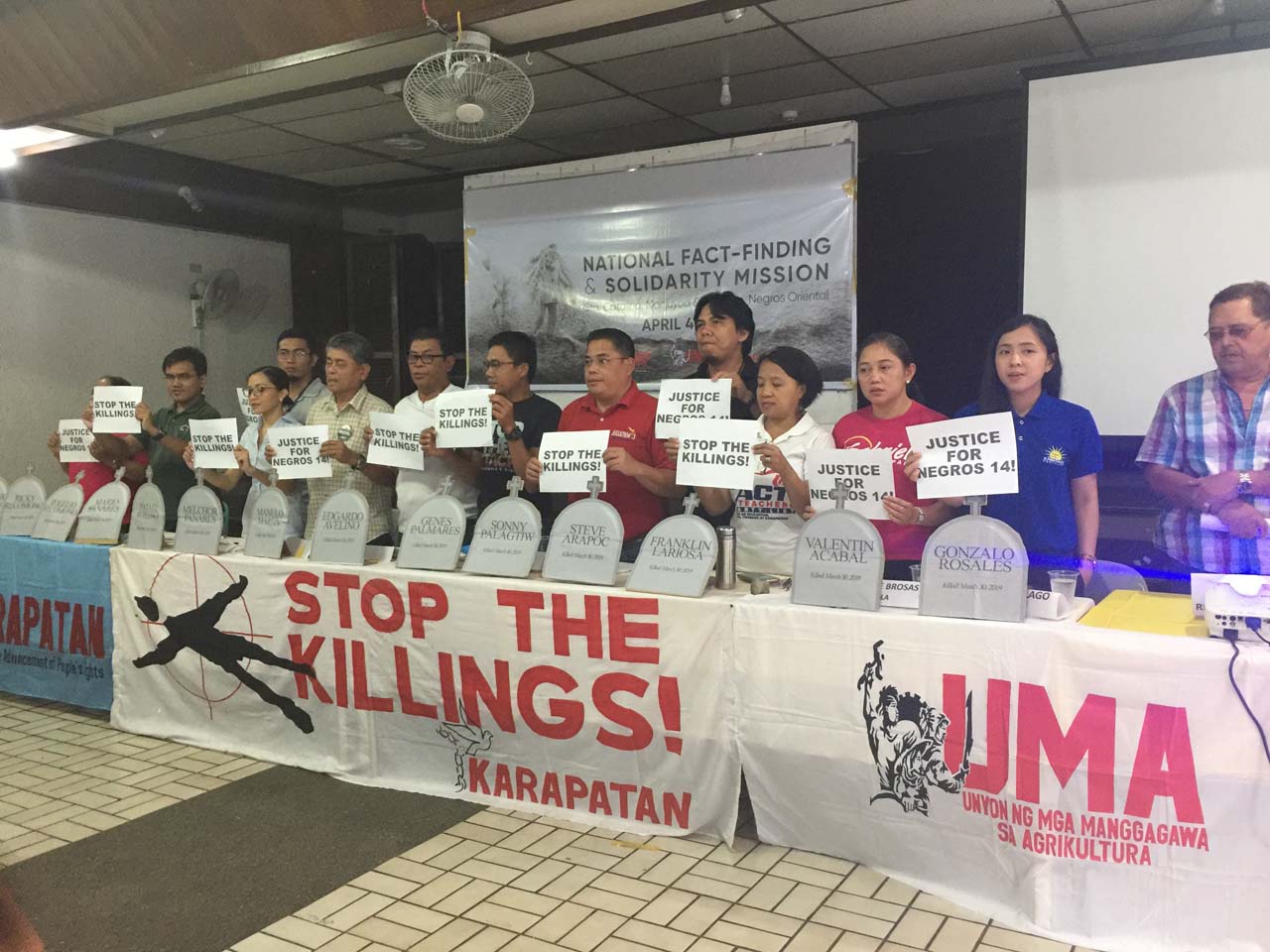 CEBU CITY, Philippines – Human rights groups raised questions over the warrants issued by a Cebu City judge that led to the deaths of 14 farmers in Negros Oriental.

During a press conference on Monday, April 8, groups including Kilusang Magbubukid ng Pilipinas (KMP), Unyon ng mga Manggagawa sa Agrikultura (UMA), and Karapatan, questioned why the police got the warrant from a Cebu judge when there are regional trial courts in Dumaguete, Bais, Guihulngan, and Bayawan City in Negros Oriental.

The groups presented the results of their fact-finding mission on the March 30 police operations that killed 14 people and led to the arrest of 15 others whom police allege are supporters of the New People’s Army, the armed wing of the Communist Party of the Philippines.

“It is equally noteworthy that Judge Peras of RTC – Branch 10 of Cebu City also issued search warrants used in a similarly-broad police operation also in Negros Island back in December 2018, which led to the deaths six (6) farmers.” a report by human rights group Karapatan read.

The report also highlighted that the Philippine National Police’s accounts differ from several eyewitness accounts, according to documents gathered during the fact-finding mission.

According to the findings, the victims were unarmed when they were killed, and some were allegedly asleep during the operation. The bodies were also moved without investigators processing the crime scene.

Relatives have also come forward to say that police took money and belongings from farmers killed in the operations.

“The families of the victims were ordered by state security forces to exit their homes. The operatives, then, planted small-caliber firearms, ammunition, hand grenades or rifle grenades inside the victims’ house. Thereafter, they reported that the victims were armed and had attempted to resist when government forces raided their homes,” the report read.

The fact-finding team wants police officials to be held accountable for the deaths in the operations, including the police chiefs in the municipalities where the killings happened in Canlaon City, Manjuyod and Santa Catalina.

She also said they would be campaigning internationally against the Duterte administration’s “policy of the politics of death.”

Anakpawis Representative Ariel Casilao called on senators – particularly Grace Poe, Nancy Binay, and Bam Aquino, whom the left-leaning Makabayan bloc is endorsing – to conduct a Senate inquiry into the killings.