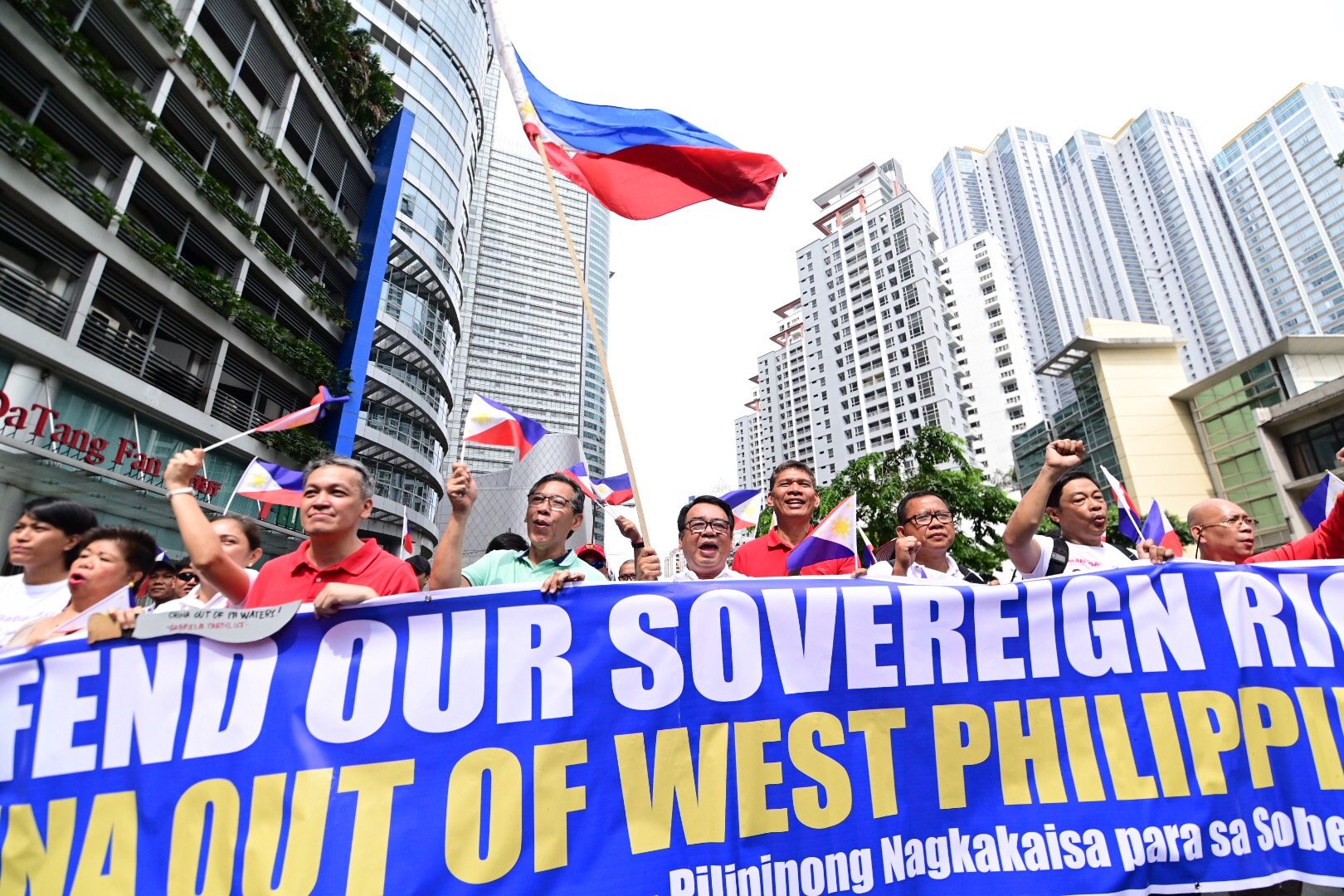 Facebook Twitter Copy URL
Copied
On Araw ng Kagitingan, protesters say the Philippines needs a leader who is brave, not macho, in defending the country's rights in the West Philippine Sea

MANILA, Philippines – Staunch critics of President Rodrigo Duterte led a protest against China in front of the Chinese consulate on Tuesday, April 9, a public holiday, in honor of Filipinos who fought during World War II.

Opposition senatorial candidates Chel Diokno and Neri Colmenares marched with hundreds of protesters to the Chinese consulate in Makati City at around 9:30 am on Tuesday. The Makati City police said around 400 people attended the protest.

Diokno and Colmenares kicked off the protest with fiery speeches criticizing Duterte’s friendliness to China.

Duterte’s China-friendly policy is shaping up as a key issue in the Philippines’ May 13 midterm elections, when Filipinos will choose 12 new senators. This electoral exercise is seen as a referendum on the popular but controversial Duterte, and his foreign policy is perceived as one of his weakest points.

Colmenares said the Filipino people want Duterte to change his foreign policy. “We continue to search for a peaceful resolution of the dispute in the South China Sea without surrendering our territorial integrity against China,” he said before a cheering crowd.

In his speech, Diokno recalled his conversation with Panatag Shoal fishermen on Monday, April 8. He said a fisherman named Wilfredo told him, in reference to China, “Ginagawa nilang kuto ang Pilipino.” (They’re treating Filipinos like lice.)

Military historian Jose Antonio Custodio, who attended the rally on Tuesday, said the protest aims “to give value to the sacrifices of our forefathers.”

Custodio said these sacrifices “are being disrespected by the current leadership, which is in a way treasonous and cowardly when it comes to facing this new threat from China.” On Monday, Diokno and 3 other candidates of opposition slate Otso Diretso – Gary Alejano, Samira Gutoc, and Florin Hilbay – met with residents of Masinloc, Zambales, to talk about China’s aggressive behavior in the West Philippine Sea.

This comes as the Duterte administration draws flak for the presence of Chinese militia near Pag-asa Island in the West Philippine Sea.

Duterte said last Thursday, April 4, that he will not allow China to occupy Pag-asa Island, while the Philippine Department of Foreign Affairs said the presence of Chinese militia there is “illegal.” Critics however said Duterte’s friendliness toward China has led to an increase of China’s incursions in the West Philippine Sea. – Rappler.com